An artificial limb can cost more than a car.

And there are an estimated 2 million amputees in the United States alone.

So for Jeff Huber, an entrepreneur who had dabbled in education and advertising who happens to also an amputee, this market was close to heart.

While an undergraduate at North Carolina State University, he had long thought about how to make prosthetics at a fraction of their current costs in emerging markets. But he wound up dropping out to do an online education startup called Knowit and then working on data-driven marketing at MightyHive.

For most of his life, Huber has used a prosthetic leg. He was born with a congenital birth defect that left him without a fully formed fibula.

As a growing child, Huber would get a new leg every nine months or so. But once he became an adult, insurance would only cover a new leg ever three to five years. His current leg costs $23,000; for patients who are above-the-leg amputees, it can cost double.

With those kinds of price points, it’s hard to get special-use prosthetics like artificial limbs for running or other kinds of sports.

Huber started interviewing other amputees to figure what they wanted most.

While Huber taught himself over the years about how to shower on one foot, it’s much more difficult for elderly patients. More than half of amputees are over the age of 50, and so a fall in the shower is literally life-threatening.

He started looking into how to produce limbs at lower cost. With a workspace in Emeryville, Huber started working with 3D printers and a number of different plastics from polycarbonates to ABS and PLA. He landed on one material he was hopeful about, but found that it wasn’t quite strong enough.

So he blended in traditional techniques, by printing a thin flame of plastic covered with carbon fiber.

All of Standard Cyborg’s prosthetics are custom-made and the final lamination process takes two hours and is done by hand. Even with the more labor-intensive portion, Huber’s techniques allow him to sell these prosthetics . (Update: The list price is actually around $799 when you include service fees.)

“It’s the first and only prosthetic leg made with a printer that’s worth less than $10,000,” he said.

As for the prosthetics market itself, the industry is dominated by Hanger Prosthetics and Orthotics, a more than 150-year-old company based in Austin that was founded by a Civil War amputee. They have roughly a quarter of the market, followed by a long-tail of many other players.

Huber is planning to grow through a combination of direct sales and working with prosthetists, who often have cultivated deep bonds with their patients through many years of molding and crafting limbs for them.

Of course, Huber doesn’t just have his eyes on building shower limbs.

“I’m OK with being pigeon-holed if I can be focused right now. But I wouldn’t want to be confined to being a company that builds shower prostheses over the long-term,” said Huber, who is also thinking about other use cases like running.

“This is just a market where there are so few players that they can just charge whatever they want.” 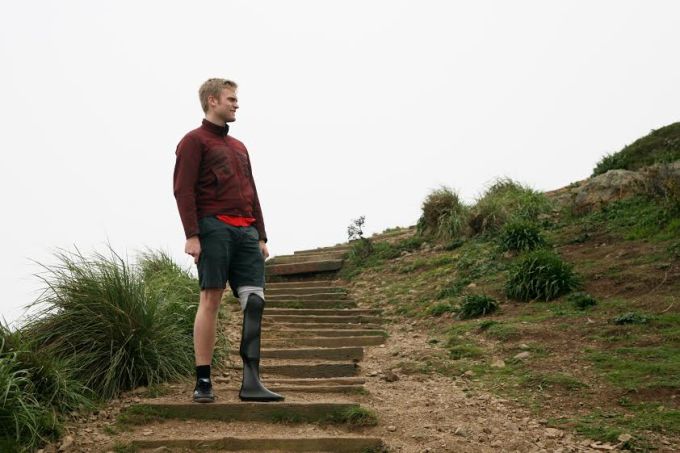