Facebook’s Internet.org project to provide basic mobile Internet services for free just took its biggest step to date after it launched in India.

The service, which is run by Internet.org with input from a number of telecom industry partners, has thus far been available in a handful of African countries and Colombia, but now it is making its way to India’s billion-plus population.

The app isn’t available to the full Indian population yet, since Facebook partnered with operator Reliance to offer free access to Internet.org sites in an initial six states: Tamil Nadu, Mahararashtra, Andhra Pradesh, Gujarat, Kerala, and Telangana. That’s the first step on a path to “provide Internet access to more than a billion people in India who aren’t yet connected,” Facebook said in a statement.

“Most” of the services on Internet.org are available in English and six local languages — Hindi, Tamil, Telugu, Malayalam, Gujarati and Marathi — and they can be accessed via the dedicated Android app, the start screen on Opera’s Mini browser or from UCWeb’s popular UC Browser app. 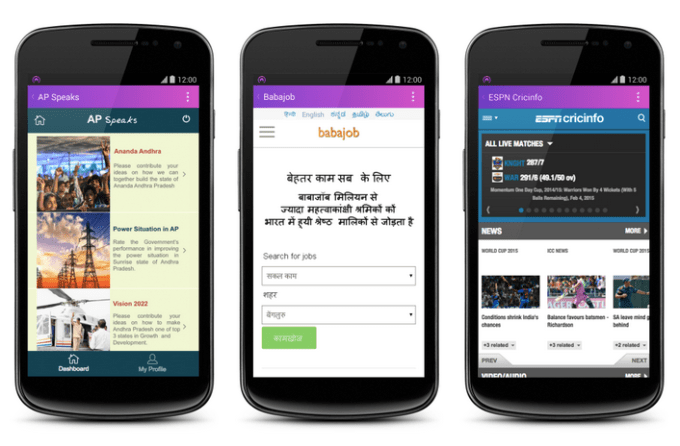 There are an initial 38 websites and services bundled into the free service in India. The selection ranges from Facebook and Facebook Messenger (of course), to news services — BBC, Reuters, ESPN and India Today — music site Hungama, news aggregator NewsHunt, Wikipedia and government relations site AP Speaks. Other general services include travel, weather, sports and parenting information.

Expansion to India has been on the cards for some time after Facebook launched a $1 million fund dedicated to making apps for India at its Internet.org summit in New Delhi last year.

Emerging markets are an important focus for Facebook since it has long become a mainstream service in Western markets, and the lion’s share of new Internet users will come online from Africa, Asia and Latin America… via mobile phones. Facebook CEO Mark Zuckerberg previously likened Internet.org to a 911 telephone call, that’s to say that basic services should be available to everyone on the planet without charge in the same way that you can call the cops for free.

Of course, the benefits of more people trying out mobile Internet services is that they might find the web compelling and go out and buy a smartphone, data plan or pre-pay SIM with mobile Internet. That’s good news for Facebook — more advertising eyeballs and users — not to mention the online/telecom industry in general, which explains the involvement of companies like Samsung, Ericsson, MediaTek, Nokia and Opera.

Aside from Internet.org, Facebook recently piloted a new ‘Lite’ version of its service for Android devices. That app — which is based on Facebook’s  Snaptu feature phone service — is specifically designed to work well with low-end phones and flaky data connections, providing users in emerging markets another option for spending time on the social network.