Despite the Silicon Valley echo chamber, starting a company remains easily among the most risky career moves for workers. The stress of the job can easily lead to burnout or long-lasting mental health issues. Failures, despite being lauded in some corners, still too often harm a founder’s future career prospects.

But the greatest risk of building a new company is almost certainly financial. In addition to the opportunity cost of lost wages working on a startup, there is the serious burden of fueling a company’s early expenses before an accelerator or venture capitalist comes in and drops some capital. It is a common form of founder braggadocio to talk about the $20,000 credit card debt that they are carrying to see their dream come to life.

The kerfuffle over the Crunchies this week was just the latest episode of a long fight over access to entrepreneurship. So far, that war has been mostly focused on women and minorities, but there has been far less discussion about financial inequality when it comes to startup founders.

The elite backgrounds of founders is well-known, and underlined in Aileen Lee’s analysis of unicorns. As she wrote, “The vast majority of all co-founders went to selective universities … and more than two-thirds of our list has at least one co-founder who graduated from a ‘top 10 school.’”

That ivy-covered background is perhaps one reason why venture capitalists are always so obsessed with “hustle” when discussing founders. Do you know who has hustle? People who can’t take Fridays off for rest and relaxation because otherwise they won’t be able to afford their rent. For the most pampered workers in the world, it should come as little surprise that we now have a whole conference dedicated to learning how to hustle.

The problem, of course, is that economic growth is just not what it used to be. The manufacturing plant that provided jobs and wages for everyone has been replaced by the in-or-out knowledge economy. Startups are one of the few avenues to rapid economic growth in the United States, but its entrances are mostly blocked to those who could most benefit.

That issue comes out of two reports that were released this week about the state of Silicon Valley and the ability of cities to create high-growth startups. Joint Venture Silicon Valley, a non-profit regional forum, released its annual Silicon Valley Index (PDF version), with dozens of tables and charts analyzing the region’s demographics and employment.

The part that caught my eye was related to income. For the Valley’s technorati, incomes have been growing at a fast clip, with the median in the region surpassing $100,000 for the first time, up about 10% since 2010. Unfortunately, that bounty is not spreading to others in the region. As the report notes, “Between 2013 and 2014, inflation-adjusted median wages decreased across nearly all major occupational groups” with the exception of two healthcare services occupations. Some occupations like services are down more than 10% in the last five years.

The evidence is even more stark when we break up the numbers by quality of profession. Those working in the top-tier jobs as defined in the report made $118,651 in Silicon Valley, compared with $26,847 for Tier 3 workers. The inequality was slightly less in SF, with both numbers converging closer to each other as is typical for highly-dense, urban areas.

These sorts of numbers should hardly be surprising given the news stories on inequality the last several years. What makes them more interesting – and should particularly concern people interested in making startups accessible to all – is the other report out this week.

Jorge Guzman and Scott Stern, researchers of entrepreneurship at MIT, released a study this week of entrepreneurship quality by zip code. They wanted to develop a predictive model that could project the number of high-growth startups in a region using available data like a company’s name and whether its incorporation was filed in Delaware. Unsurprisingly, they found that the startup quality in much of Silicon Valley was significantly higher than elsewhere in California. 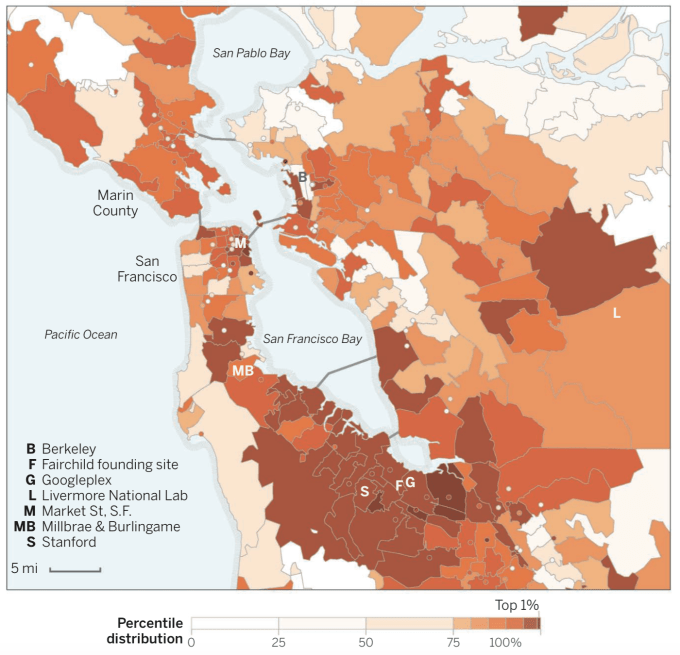 A map of entrepreneurial quality by zip code from Guzman and Stern’s study in Science Magazine.

What caught my attention though is how similar the map of entrepreneurship matched the Bay Area’s inequality. The correlation even fits well in San Francisco, where the richest neighborhoods have quickly become hotbeds for startups, while the poorest ones remain far removed from that potential for economic growth. While causation is difficult to prove here, it seems clear that companies leading us to the future are concentrating themselves as far away from those who most need the future to arrive.

I am not just concerned that the lack of startups in these economically depressed areas means fewer employment opportunities. What concerns me most is that startups that are insulated from these regions have little incentive to provide services to the people who inhabit them. There is a reason why Uber and Caviar were invented in San Francisco. Only now are we starting to see a focus on more bread-and-butter issues like income security, with startups like Activehours and Even trying to help hourly wage earners meet their financial obligations.

I get all the reasons why startups make the choices they do. They need to hire startup employees, particularly engineers, and these individuals only inhabit a couple of zip codes in the region. I understand that academic pedigree is important, and that startups by their very nature demand the very best talent for any chance to succeed. These comments are eminently reasonable, but it is so easy to ignore an almost completely intractable problem rather than to address it.

For a region that talks so often about empowering users, maybe it is time that we started thinking about ways of empowering founders across the income spectrum. Our industry loves its elitism and meritocracy, but how can we be sure we aren’t leaving the next great founder behind? The most valuable company in the world was started by a college dropout lacking the wealth we often see today. We can’t afford to miss the next one.