Shopline, a startup that wants to bring more sophistication to the online sellers who have sprouted up alongside the rise of social media in Asia, has landed $1.2 million to develop its service and expand across Southeast Asia.

Shopline provides an ‘out-of-the-box’ package that gives online retailers of all sizes their own website, payments system and logistics network for their business. Beyond the basics — including an easy dashboard to manage the ‘store front’ and track data — Shopline offers marketing and promotion services to help less tech savvy retailers grow their reach and visibility, while it says websites are responsively designed to support visitors from mobile devices.

The one-year-old startup initially adopted a freemium model, but it has changed that. Now retailers pay $40 per month, and — importantly — they do not incur any transaction fees at all. 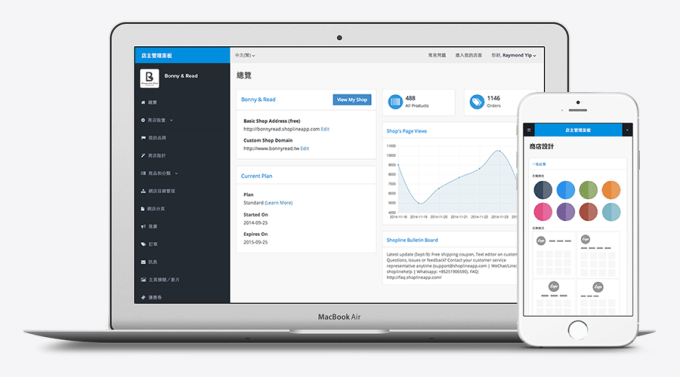 Shopline CEO and co-founder Raymond Yip told TechCrunch in an interview that the company has helped create over 15,000 shops to date. Yip said its top sellers are grossing $25,000-$35,000 in revenue per month, but there are plenty of smaller retailers using the service for their side project business.

The company is immediately focused on the Chinese-speaking markets of Hong Kong and Taiwan, Yip said, but it will look to expand its presence into Southeast Asia this year.

The rise of social media shops — wherein merchants sell items via Facebook, Instagram and other sites, often using messaging apps to communicate and ATM/bank transfers to pay — has not gone unnoticed. U.S.-based Shopify made a big push into Asia, and there are countless domestic rivals and marketplace sites like Rocket Internet’s Zalora and Lazada open to merchants, but Yip believes Shopline’s focus on Asia is key.

“There are global players, but a lot of them don’t speak the language of the local market — their language of business is different. We want to give the merchants here what they need.” he said.

For instance, Yip pointed out that Shopline supports deliveries to 7/11 stores in Taiwan — that’s something that is near-standard for those in the country who order goods from online stores.

Yip admitted that Southeast Asia is an enticing market for Shopline, but it will need to take a “market-by-market” approach to expansions given the importance of local factors in each country. That’s certainly where a partner like Ardent Capital (aCommerce) could be hugely important since its network spans the key markets in Southeast Asia.

Right now, Shopline uses a combination of word-of-mouth, seminars and direct contact with top merchants to recruit new retailers to its platform.

“We tell merchants that they can continue to work and sell on social media, we’re just giving them new options,” he explained.

Given the success of artisanal online commerce such as Etsy in the U.S., a unified marketplace for all Shopline merchants might make sense as destination for potential customers. Yip said that the company has been working on such an idea that it will launch to the public in the future.