Jukely, the unlimited concert subscription startup, has been expanding its services to cities all over the U.S. since its launch last October. Memberships were first offered in New York, then L.A. A lot of people (myself included) have been waiting for it to hit the Bay Area.

That time has finally come. Jukely concerts are now available in S.F.

The service works by curating smaller music venues and musicians and then offering a $25 monthly subscription for members to go see an unlimited amount of concerts in their city. Both Jukely and concert promoters make money by filling what would be otherwise empty seats with those who want to discover new bands or go see lesser known musicians in their area. 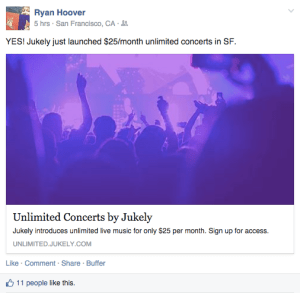 Jukely is also somewhat of a music matchmaker. It will introduce users to other people on the platform with similar musical tastes and suggest music the system determines you might like but haven’t heard about yet in your area.

The founders say they don’t want to just let anyone in and risk blowing up the system. Co-founder Bora Celik told me at the SF Music Tech Conference last November that he personally vets those able to sign up currently. The slow roll out to different cities is also a way to prevent that.

The first couple of concerts for members land tonight in S.F. with London Richards at Slim’s, G-Eazy at The Warfield and Particle at the Great American Music Hall.