Bumble, the dating app that puts the ladies in charge, is today launching a bold new feature.

The app has introduced photo-messaging, which may be one of the first times that a mobile dating app has allowed users to send each other direct photo messages.

According to Bumble co-founder Whitney Wolfe, photo-messaging represents an opportunity to help kickstart a connection given that Bumble asks girls to initiate the conversation.

“It’s a big risk for a dating app,” said Wolfe. “But we see it as a great ice breaker for girls who want to start a conversation in a more Snapchat-like way.”

When a user sends a photo message, two things happen instantly. The first is that the photo is blurred unless the user is holding down on the screen, Snapchat style. Whenever the user is holding down and the photo is clear, it’s water-marked with the the sender’s name and a picture of their face. This prevents anyone from sending something that they wouldn’t want forever attached to their identity online.

Of course, nothing can stop anyone from creating a fake name Facebook account and using it to hook into the Bumble app, but Bumble requires a minimum amount of friends to ensure that people are real.

The photo messenger also comes with the ability to draw or type a short caption, similar to Snapchat, making Bumble an odd little combination of Snapchat, a Sadie Hawkins’ Dance, and of course, Tinder.

Which makes sense. Bumble co-founder Whitney Wolfe got her start at Tinder as part of the founding team and helped lead the marketing efforts around that fast-growing dating app. Last year she left the company and filed a lawsuit against Tinder, IAC, and the Tinder executive leadership team for sexual harassment, sexual discrimination and wrongful termination, among other charges. The case was eventually settled out of court with no admission of wrongdoing from either camp.

Wolfe has since been building out Bumble alongside other former Tinder employees Sarah Mick and Chris Gulzcynski. The app launched on December 2 2014 and has grown to more than 1 million matches. 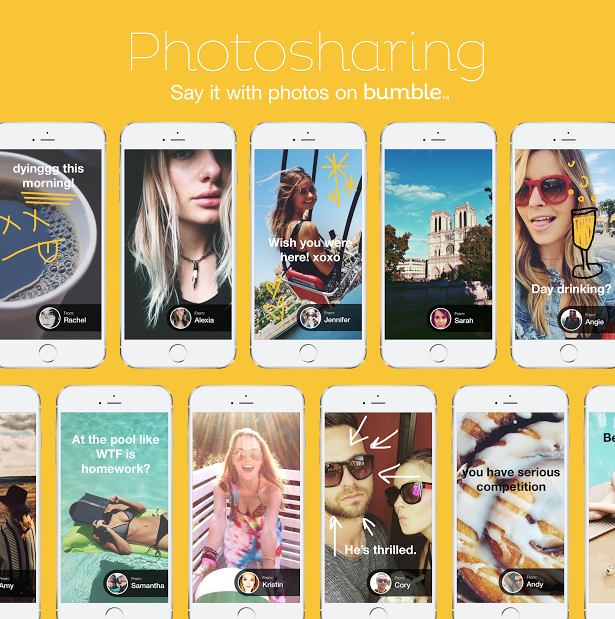