Mobile application marketers have traditionally chased new users through campaigns designed to prompt app installations. But a company called Liftoff is focused on helping companies acquire a more valuable customer base – those who take action beyond the install. That is, it helps target customers who do things like make purchases, renew subscriptions, reserve a hotel room, or whatever else the app marketer is after.

Now the company has $5 million in Series A funding to help it continue to grow its business, as well as expand into the next phase of the customer life cycle: re-engaging users via retargeting.

CEO Mark Ellis, who previously worked at Ooyala before starting Liftoff, says he saw there was an opportunity to help marketers gain greater confidence with regard to the dollars they were spending when it came to paid user acquisition on mobile.

The company itself was founded in August 2012 but has been fairly quiet about its service until now, choosing instead to first build up its customer base and product before trying to call attention to itself in the media. 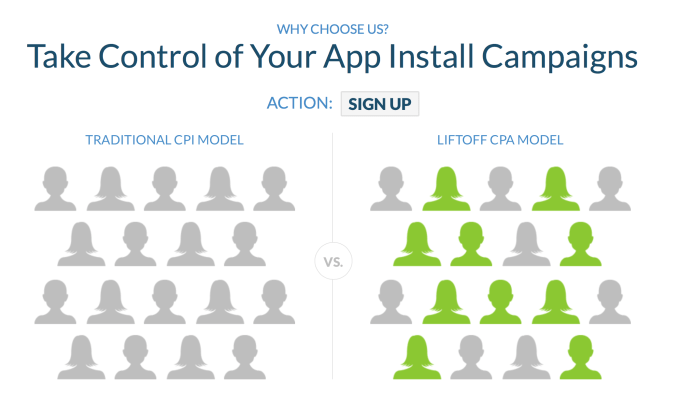 Today, Liftoff works with companies who have mobile applications to manage their marketing spend for them. That way, the businesses no longer have to worry about where they need to run their campaigns or how; they can just tell Liftoff what kind of users they’re after. For example, they may want to find those who are known to be good mobile shoppers, or they may want to find users who are willing to share on social media, or those who are willing to register or subscribe to a service.

To find these users, Liftoff’s platform uses data it pulls from a variety of sources, one being its own SDK which is installed in a number of apps. The company also leverages data from third parties through licensing and other partnerships. This data allows Liftoff to uniquely identify mobile users and build profiles on them, which can then be used to develop profiles of similar-looking users. The platform has over 1.1 billion unique mobile profiles today. 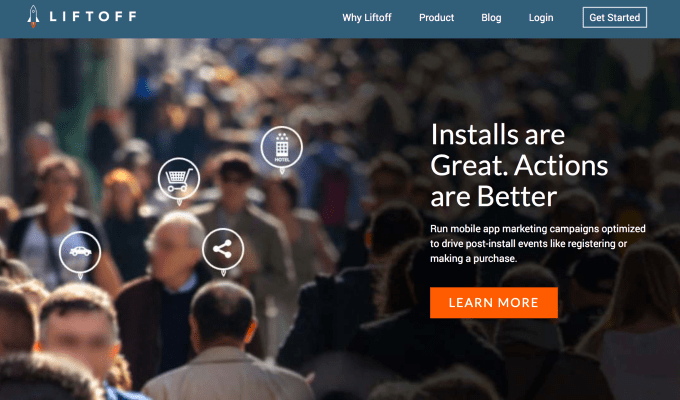 It then targets those profiles with campaigns that it runs on clients’ behalf. The company says it finds the users wherever they are through integrations with mobile RTBs and ad networks. It also works directly with publishers and advertises to users on social, including Facebook and Twitter.

For end users who don’t want to be tracked on their mobile devices, there’s only so much you can do about something like Liftoff. While Apple and Google let you reset the advertising identifier on your device for privacy’s sake, doing so doesn’t really impact Liftoff’s ability to do business. It will just start over, building up a fresh profile on you and your behavior.

Because the product is helping to connect app marketers with engaged users instead of just app downloads, Liftoff uses a different business model.

“We bring a high degree of data and underlying prediction intelligence to bear, to know which users to go after in their native environment – be it phone or tablet, iOS or Android,” says Ellis. “Customers pay us on more of a cost-per-action rather than a cost-per-install basis.”

The cost for those actions can vary quite a bit, from just a few dollars all the way up to hundreds of dollars for something more valuable, like a subscription event.

The company today is also launching the first of what will be a series of free quarterly reports on the costs associated with these mobile app actions, with the debut of its “Mobile App Engagement Index.”

For example, this report offers benchmark data on what it costs today to reach users who will take actions like registering ($9.45) or sharing ($24), and much more. It also tells you things like how social apps have the highest install-to-registration rate at 88.4 percent followed by e-commerce (70.6 percent) and finance apps (52.1 percent). 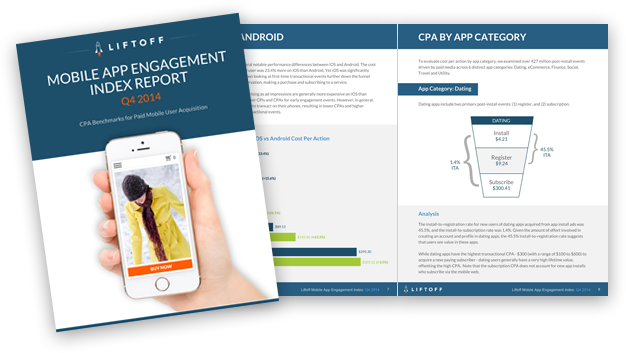 Liftoff currently is approaching 80 customers and is growing quickly, with the expectation that it will reach 250 customers by year-end. For the most part, these customers’ apps are in categories like commerce, travel and leisure, social, dating, productivity and utility.

Some of its customers include well-known names in the tech industry, such as Uber, Jackthreads, Lifelock, Square, Docusign, Gilt, OpenTable, HotelTonight and more.

With the additional funding, the team plans to grow its now 25-person team, expand into retargeting, and expand its customer profiles to include more geographies as well as find those customers who tend to favor the mobile web.