Zapproved, a Portland, Ore.-based legal software startup that helps businesses comply with data-retention rules and during the eDiscovery process when they face litigation, today disclosed that it has raised a $15 million funding round led by K1 Investment Management. This round brings Zapproved’s total funding since the company launched back in 2008 to more than $20 million.

As Zapproved’s founder and CEO Monica Enand and VP of Marketing Chris Bright told me last week, the company quickly homed in on the legal market after it launched a far more basic product seven years ago. It took the team a while to gain a foothold in the rather conservative legal industry, but once it managed to convince a couple of legal departments to trust its cloud-based approach, the company quickly gained new customers and became cash-flow positive. It did so by disrupting what Enand likes to call the “eDiscovery industrial complex.”

The standard concept behind eDiscovery had long been that businesses should just gather as much data as possible — which in turn means you are paying your lawyers for all of the time it takes to sift through that data. Zapproved, on the other hand, believes that businesses should take a smarter approach that uses its algorithms to collect the data and then shrink it down to as little as possible for the eyes-on review later in the process. Working through 500 gigabytes of data could easily cost a company almost $200,000 in legal fees, so a smart collection process can quickly save a company quite a bit of money. 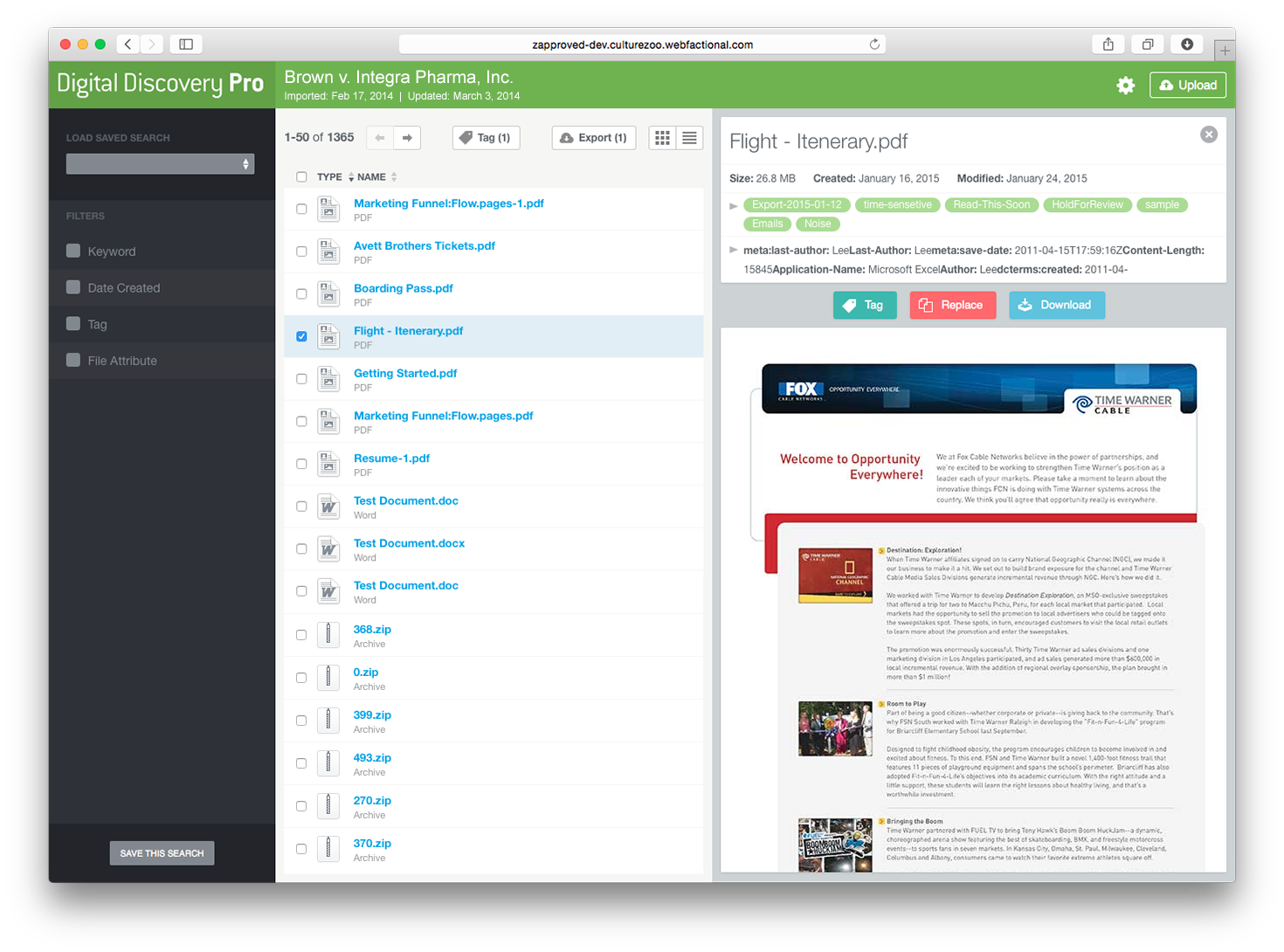 Equivio, an eDisovery service Microsoft acquired last month, can also be used to search through multiple terabytes of data to find those nuggets of information you need, for example. But as Enand told me, Zapproved believes that you shouldn’t have to do that. “There’s an ‘e-discovery industrial complex’ that feeds off of this with a ‘collect everything’ mindset — and charges exorbitant rates to do so,” she said in today’s announcement. “Corporations can’t continue down this path and we need a new approach to achieve the goals of Rule 1: a ‘just, speedy and inexpensive’ resolution to civil litigation.”

The company already put this funding to good use by quietly acquiring eCloud Collect, a remote data-collection service that complements its Legal Hold Pro flagship product by making it easier for legal departments to collect data from employees’ computers, as well as company servers and cloud storage accounts. The eCloud Collect technology now forms the basis of its new Data Collect Pro service, which it is officially launching today, together with its new Digital Discovery pro data processing service. Thanks to the combination of these three tools, Zapproved now offers a comprehensive eDiscovery solution for large businesses.

Bright couldn’t disclose any of Zapproved’s customers (this is the legal industry, after all) but did note that they include a wide range of very large enterprises ranging from airlines to large auto and consumer goods manufacturers.

Enand and Bright told me that Zapproved could’ve continued to grow without taking outside funding — the company now has about 50 employees — but in order to push its service forward and quickly launch the kind of new products its customers were looking for (and scale the company to support this), Zapproved decided to raise this new round.

Enand also noted that the company got a lot of inbound interest once it established itself in the legal world, but the company decided to go with K1 because the firm focuses solely on mid-sized software companies and takes a very hands-on approach with its portfolio companies. In Enand’s view, all early-stage companies have very individual needs, but once they grow, they all face very similar challenges — and that’s where K1’s management experience comes in.