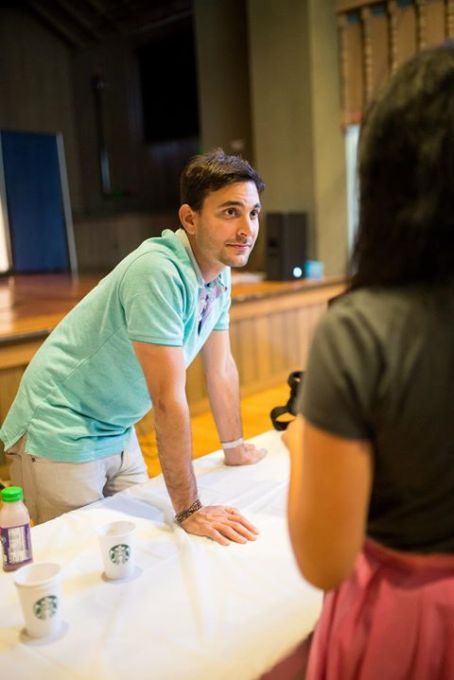 I remember meeting Greg Gopman for the first time several years ago at a Facebook mobile hackathon. He had just moved from Miami and was in full-on hustler mode.

Newcomers to the Valley are a varied sort. Some are idealists, spewing truisms from Steve Jobs keynotes. Some see stories about billion-dollar acquisitions and have pretty thinly-concealed ambitions of validation through funding rounds, TED talks and magazine covers without understanding that the path takes years. And existential crises. Many existential crises.

But Silicon Valley is not like New York or Los Angeles. If you are so inclined, you can show up not knowing anyone and then network your whole way around the place in a single year. Silicon Valley is heterarchical, not hierarchical. It is part of how the region reinvents itself constantly, but the Valley’s openness to the young and starry-eyed also attracts plenty of wantrepreneurs.

Gopman’s talent is admittedly in business development. He’s not technical. But he’s dogged in other ways. He snuck into a TechCrunch Disrupt hackathon once, walked away with an honorable mention and somehow managed to get backstage where he sat behind Jack Dorsey, who was a judge. Then he started putting together hackathons that competed with Disrupt both here and in the Philippines, Singapore and other Asian markets. It looked like one of those classic fake-it-til-you-make-it stories.

Then one night after landing at the San Francisco International Airport from Asia, he killed all of his momentum by posting a Facebook update in the middle of the night:

Just got back to SF. I’ve traveled around the world and I gotta say there is nothing more grotesque than walking down market st in San Francisco. Why the heart of our city has to be overrun by crazy, homeless, drug dealers, dropouts, and trash I have no clue. Each time I pass it my love affair with SF dies a little.

The difference is in other cosmopolitan cities, the lower part of society keep to themselves. They sell small trinkets, beg coyly, stay quiet, and generally stay out of your way. They realize it’s a privilege to be in the civilized part of town and view themselves as guests. And that’s okay.

In downtown SF the degenerates gather like hyenas, spit, urinate, taunt you, sell drugs, get rowdy, they act like they own the center of the city. Like it’s their place of leisure… In actuality it’s the business district for one of the wealthiest cities in the USA. It a disgrace. I don’t even feel safe walking down the sidewalk without planning out my walking path.

You can preach compassion, equality, and be the biggest lover in the world, but there is an area of town for degenerates and an area of town for the working class. There is nothing positive gained from having them so close to us. It’s a burden and a liability having them so close to us. Believe me, if they added the smallest iota of value I’d consider thinking different, but the crazy toothless lady who kicks everyone that gets too close to her cardboard box hasn’t made anyone’s life better in a while.

To be fair, I (unfortunately) run into other people with these kinds of beliefs. They’re just not dumb enough to publish them.

He ended up in ValleyWag with a post called “Happy Holidays: Startup CEO Complains SF Is Full of Human Trash“. And in Slate, The Huffington Post, The Daily Mail, ThinkProgress and the Bay Guardian.

Since Gopman works on the sales and business development side, it pretty much destroyed his career. Anytime he would cold call or do any kind of outbound outreach, that single Facebook post was the top — I don’t know — 10 pages of his search results.

But he also understood that he had fallen face-first into something he didn’t understand. So Gopman spent the last year studying homelessness and partnering with groups like the Downtown Streets Team.

He wrote about his yearlong exploration last week on Medium:

Over time, and with a lot of help from friends, research and volunteering, I came to see the many reasons why people become homeless, and the near impossible road to recovery they all share. That they’re a group of people suffering, depressed and lost in a system that they can’t find their way out of. And that it’s everyone’s responsibility to figure out a way to help.

A few weeks ago, I stopped by his place. Gopman had convened a group of non-profits and homeless advocates for a meeting.

A formerly homeless woman talked about how she was overcome with depression after caring for her dying mother. She had raised several children, who had gone onto college and graduate school.

But her mother’s death broke her spirit. She walked out of the door of her house, which was underwater after the recession, and didn’t look back. She slept on the streets for months. She described the complex calculus of being homelessness — which bus line to get on to find a shower and what time each meal kitchen was open.

“The first thing you think about when you wake up every morning is where to relieve yourself,” she said. (For those of you sharing that San Francisco Poop Map, that’s why there is so human excrement on the sidewalk.)

A Little Bit of Background

While I haven’t looked into homelessness to the same extent that I’ve studied the housing market or residential segregation in the Bay Area, I can tell you that it is not a permanent facet of the city’s history — at least not at the scale that it has existed at for the last generation.

Homelessness exploded in San Francisco in the early 1980s, through a confluence of factors including the de-institutionalization of mental health services, the destruction of public housing under urban renewal, the erosion of federal funding for low-income housing during the Reagan administration and escalating rents as the city started grow its population again for the first time in 30 years. To top it off, there was the crack cocaine boom, the AIDS epidemic and the return of veterans from the Vietnam War.

At first, the city treated it as a temporary problem with shelters under the Dianne Feinstein administration.

But homelessness persisted. Former mayor Art Agnos allowed and then broke up an enormous homeless encampment in front of City Hall in 1990. Gavin Newsom tried “Care Not Cash” in the 2000s.

The city shifted toward a more holistic and effective solution called “supportive housing,” which pairs housing with counseling and job training. It turns out that the cheapest way to deal with homelessness is just to house people. It costs San Francisco $61,000 a year in jail, emergency medical and support services to care for a homeless person on the streets, versus $16,000 per year to house them. But if the city can’t even figure out a housing strategy for the middle-class, it’s hard to see how it will simultaneously generate the political will to house lower-income communities and the homeless.

For the last decade, San Francisco has spent roughly $165 million a year on homelessness. But the city’s homeless population has barely budged at around 6,400 people. That’s because, even though city programs were successful at moving 19,500 people off the streets, more people either showed up or lost their homes after the Great Recession. The city and an army of volunteers just conducted the biennial homeless count a few nights ago.

San Francisco is a progressive city in an unforgivingly individualist nation. And now, with commercial office listings coming onto the market at anywhere from $60 to 120 a square foot, an ultra high-end food market opening this month inside the Twitter building and more tech companies moving into the mid-Market area, the juxtapositions of wealth and poverty are only going to get more extreme. Most newcomers do not understand the Tenderloin’s unique political history, or the protections it won in the 1970s and 1980s that will keep it from following gentrification’s typical path.

And so, we will have to co-exist. The city is in a different place than a year ago. Mayor Ed Lee is basically running unopposed for re-election this year. Pro-housing activists are confronting neighborhood groups and NIMBY-ists who have stalled or watered down developments for years. Progressives lost on a key set of races in last November’s elections, including an anti-speculation tax. However, Ellis Act evictions are down and Ron Conway’s non-profit Sf.citi will back reform of the law in the state legislature this year. David Talbot, who co-founded Salon.com and wrote a fabulous history of San Francisco in the 1960s through 1980s called “Season of the Witch,” has gone from asking how much tech the city can take to urging workers not to be “Stanford assholes.”

Gopman says he’s changed too. It’s definitely confusing to people, who aren’t really sure what to believe. I believe he’s remorseful and that he knows he’ll have to walk the walk, on top of writing blog posts. And while it is naive to think that a group of tech workers can solve a problem that has bedeviled the city for decades, the lack of political will, concern and empathy for the poor is absolutely a contributor to the intractable nature of the problem.

“If nothing changes from here on out, then we are all to blame because we sat by and accepted the status quo instead of seizing the opportunity before us. Change does happen, but only with a strong kick in the ass to get things going.”

The wrath of the Internet is indeed a strong kick in the ass.

If this is a “TechCrunch benediction,” sure, OK. Whatever. You can judge him for what he does, and not what he says.

If you’re interested in the issue of homelessness, sign up and let Gopman show what he can do.