Editor’s note: Neeraj Agrawal is a general partner with Battery Ventures in Boston.

“What does it take to build a billion-dollar SaaS enterprise-software company?” I hear this question a lot in my work as a tech investor, and it’s incredibly tough to answer. I bet mountain climbers feel the same way when they’re asked how they conquered a major summit. The answer is both incremental — you succeed by placing one foot in front of the other, of course — and more pragmatic, in that the journey is always broken into multiple, distinct phases.

You don’t climb all of Mt. Kilimanjaro in one day, and you don’t build the next SaaS standout quickly, either. Instead, you shrink your focus and keep your goals clear-cut then recognize what the next level looks like and scramble like mad to get there.

“My son works at Battery Adventures”

I started thinking about how my job in venture capital resembles mountain climbing thanks to a very unlikely person: my mom. She and my father immigrated from Rajasthan, India, to Queens in the mid-1960s. My parents are both smart, hard-working, practical people who don’t really understand what I do at work.

I’ve described my work so many times to my sweet, tiny mom (she’s just 4’11”) but she can never remember exactly who I work for. Recently at a party, she proudly told her friends: “My son works at Battery Adventures.”  Her friends smiled, but they were disappointed that I was neither a doctor, like my dad, nor working at a brand-name bank like Goldman Sachs or Morgan Stanley.

Her remark got me thinking. Maybe she captured my career better than I’d realized. Maybe the right way to think about building a company is going on an “adventure,” not merely a “venture.” And perhaps my role as a VC is that of an adventure travel guide: someone who’s climbed the mountain many times before, who knows both the terrain and the phases of the climb intimately, and can serve as a guide for others brave enough to take up the challenge.

I’ve had the amazing fortune to work with many world-class founders over my 15-year tenure in venture, including many B2B, SaaS enterprise-software companies such as Marketo, Omniture, Guidewire, Bazaarvoice and Sprinklr (for a full list of all Battery investments and exits, please click here.)

So I’d like to share some stories and advice from my personal travel log — call it a tale of “adventure” and a guide to the mileposts entrepreneurs will need need to traverse to reach their summit: a billion-dollar valuation.

I believe there are seven key phases in SaaS companies’ go-to-market success. Most of the phases center around a mantra I call “triple, triple, double, double, double,” (T2D3 for short), referring to a company’s annualized revenue growth.

This is not the only growth path to SaaS success, as enterprises like Cornerstone, ExactTarget and SuccessFactors have shown, but it is one sure-fire way to get there. Each phase demands a different focus, such as adjusting your sales process; growing your team and your organization strategically; and expanding internationally.

You’ll notice that I specify “go-to-market” because there are many other critical phases of SaaS company growth, as well. They include selecting a co-founder, choosing a capital partner, developing a scalable product architecture and fostering a winning company culture, among others. Here, we’re focusing only on the mechanics of the “climb” itself. So grab your outdoor gear — we’re hitting the trail and heading to the peak.

I usually ask several prospects or customers in a specific sector to describe their pain points. When I hear consistency across the sample set, I know we’re there. Once the product is developed, it’s easy to run tests to see if customers are actually realizing a benefit. It’s also critical this pain be among the top one or two pain points for the company’s target customer. I’ve noticed over the years that customers never really get to priority three on their list.

Phase 2: Get to $2 million in ARR (annual recurring revenue). In this phase, the founders are closing all the new sales, so the name of the game is landing the “right” starter clients and perfecting your sales pitch and funnel strategy. Assuming your average deal size in the $30K-$80K range, this means getting to 30-60 customers. Completing this phase usually takes a year or two.

Phase 3: Triple to $6 million in ARR. I often see SaaS founders take two paths to reaching this first “triple” goal. In the first scenario, which I call the “hero” approach, the founders close just about every deal. That’s a tenacious strategy, but not scalable.

The second, “sales machine” approach is more difficult, but preferable. It involves hiring the right sales leader, plus five to 10 reps, and priming them to scale the next peaks. Perhaps half of these salespeople will be productive during this period, but others will be ramping for the following year.

Phase 4: Triple to $18 million. Here’s where the magic kicks in, similar to how you feel when you reach the first base camp on the mountain. Here, renewals and referrals help fuel sales, likely driven by just 10 to 20 sales reps, of which half might be fully ramped. Then you reach another milestone: adding a second layer of sales management underneath the VP of sales.

This can be difficult for a founder/CEO, as he or she is now three levels removed from the actual people selling the product. But at the same time, a founder/CEO can really grow during this phase, transitioning to thinking about cultivating new managers and landing really large accounts. The magic moment is when deals start closing that no founder was actively involved in pitching/closing.

The seeds for massive scalability are planted here. In my experience, successfully adding a second layer of sales management is one of the most difficult milestones for SaaS companies.

Phase 5: Double to $36 million in ARR. This phase involves fielding a team of about 20-30 sales reps and three to five front-line managers. Its major challenge, though, is getting sales in Europe working. International efforts often get started in this phase with a VP or sales rep hired somewhere in EMEA (some combination of U.K., France and Germany). Many companies make the mistake of entering multiple international regions at once.

I encourage my founders to get EMEA working first; go deep versus wide. Put a team of three to five reps in the U.K. versus one to two in each country. This allows you to build customer references, develop a playbook and cultivate country leaders who will make sure you have success.

Phase 6: Double to $72 million. This phase is rife with operational challenges. Should you promote someone within sales to run your North America division or hire from outside? Hire a worldwide CRO or have EMEA report to the U.S. leader? Another thorny issue many companies tackle here is establishing non-linear growth or getting the reseller or partner channel working.

In my experience, it’s premature to get a reseller network up and running for a SaaS company before hitting a $50 million run rate. There are simply just not enough economics for the channel partner to prioritize the effort. In addition, I prefer quality over quantity – just try to get one or two channel partners productive versus dozens. It’s so hard to get even one reseller relationship working in the field.

Phase 7: Double to $144 million. The summit is close. The $1 billion valuation milestone, and a potential IPO, are both within sight. However, with luck and hard work, this will be just the beginning. At a recent IPO celebration, the head of NYSE remarked that, for the exchange’s great companies, 90 percent of value is created post-IPO. I firmly believe this. It’s the reason why I invest across early and late venture stages. If I’m doing my job right, all these private companies are just early-stage businesses. After completing Phase 7, the next major milestone is now set — getting to $1 billion in revenue! 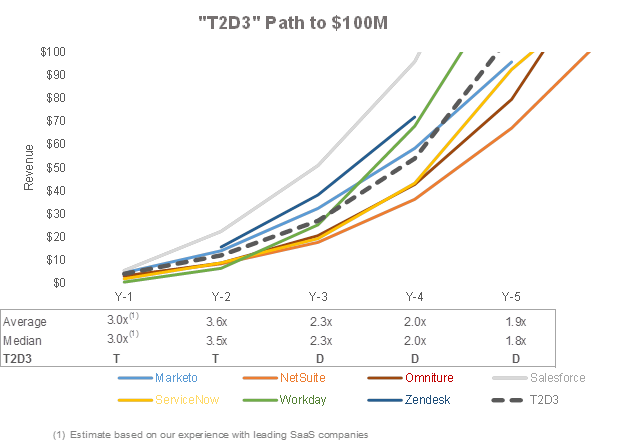 Maybe one day I’ll go back to medical school and realize my father’s dream. Until then, I’m happy to help company founders achieve their dreams. And bless my mother for highlighting in her own way that you can build a great career through a series of memorable “adventures” with standout entrepreneurs.