With the app economy showing no sign of slowing, the iOS App Store, too, continues to grow, and has now reached over 1.42 million apps, according to a new report out this morning from app analytics firm adjust. One interesting metric the report uncovered is just how many of the apps are effectively invisible to consumers – something adjust lovingly refers to as “zombie apps.” Today, it reports, 83% of the apps in the App Store are zombies, up from 74% in January of last year.

In case you’re wondering, an app is not considered a “zombie” if it appears two out of three days in the top 300 lists on the App Store. Being ranked makes an app organically discoverable by end users who browse these category lists. Currently, each of the 155 iOS country stores show up to 300 placements in 23 different genres, with 18 additional subgenres under “Games.” There are also both free and paid lists to target, meaning there’s the chance for several potential placements.

In March, the App Store topped 1 million apps. The “zombie” count then hit the same milestone in September. 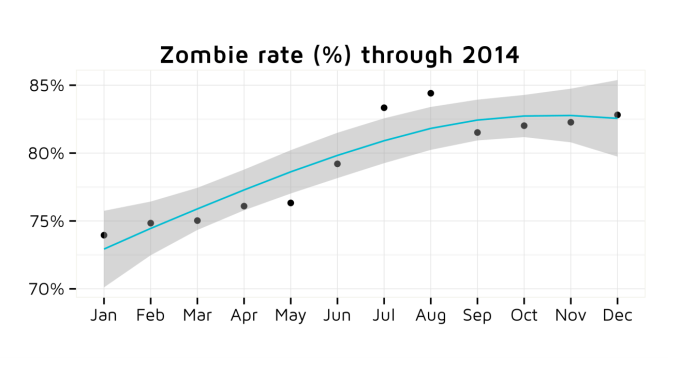 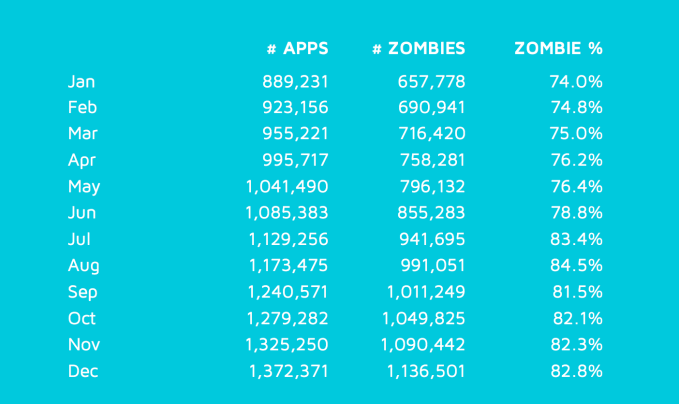 Some genres are tougher to compete within than others, adjust also notes. For example, the “Business” category is today dominated by a few successful apps worldwide, and newcomers have small chance of ranking. They may do better choosing less competitive categories like “Productivity” or “Finance,” for example.

“Navigation” and “Sports” apps, meanwhile, have much lower zombie ratings as they’re often location-specific, and therefore compete with a smaller subset of local apps.

There’s a well-defined relationship between a category’s size and zombie rate. For example, because the smallest category in the App Store is “Weather,” half its apps rank in the top lists. 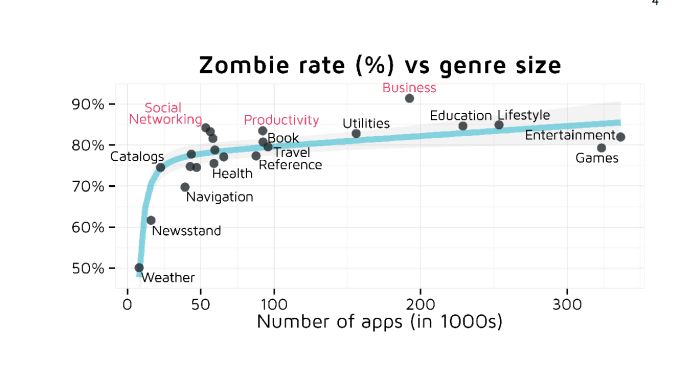 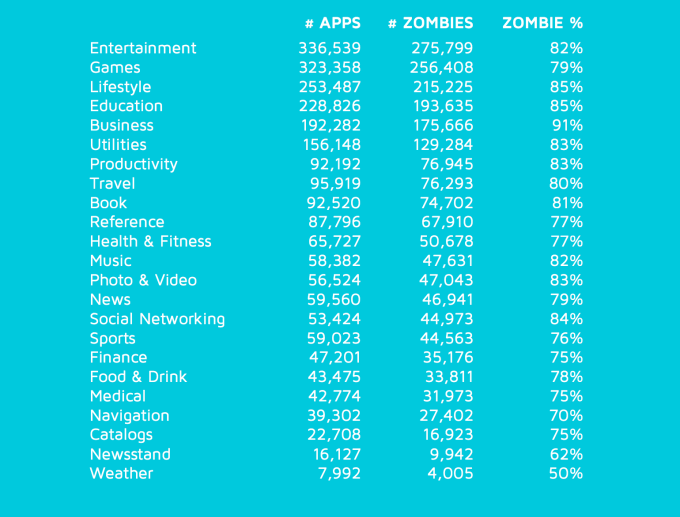 But once a genre has around 250,000 apps, zombie rates scale upward quickly. The “Games” category is a good example of this problem – it has an over 80% zombie rate. Some app marketers understand this, which is likely why 22.9% of apps listed in a subgenre of games don’t even bother listing in the top “Games” category. 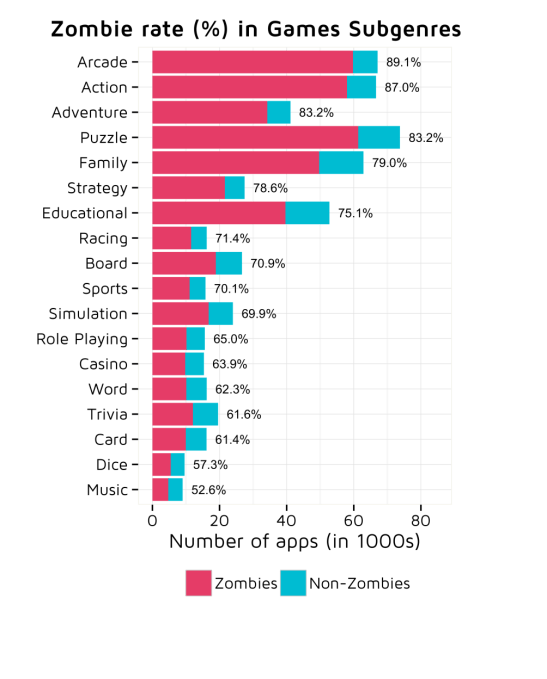 Zombie apps in international markets have their own challenges to face, as well. Today, the zombie rates for the German and Chinese App Stores (80.6% and 81.3%, respectively) are higher than the Japanese and Russian (77.6% and 73.2%) stores. Sometimes stores benefit because there are fewer apps competing for top local lists. Other times, successful apps are translated for that language, and then move into rank when they launch in that market, also impacting the zombie rate. 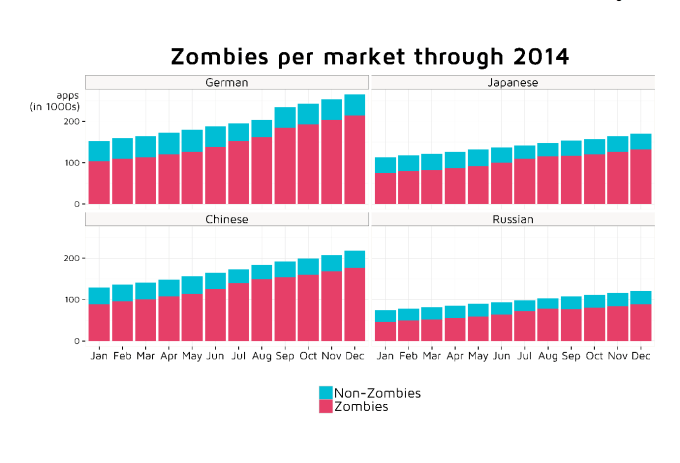 The increase in the “zombie” metrics year-over-year indicates how important it is for today’s app developers to understand and take advantage of ASO (app store optimization) techniques – which is similar to SEO for search, but instead focused on getting a high ranking in the app stores’ search results pages.

It’s also useful for developers to carefully select which app categories to list in. Because apps can fall under different categories, Apple allows developers to choose up to three genres. Selecting those where the market is less competitive can be a major advantage, and can help apps from falling into a zombie status.

Adjust’s report boldly proclaims the “App Store is dead,” but that’s not really the case. Browsing the App Store’s lists is only one way to discover apps today, and it’s becoming a less important one. Many times, consumers are using more than lists – they’re checking out featured selections, collections, and searching for apps. Apple has even started making some improvements along this front, having last spring added related search suggestions to its iOS App Store, for instance.

But the challenges of app discovery have also allowed others to step in and one-up Apple in this area, most notably Facebook. Now 526 million monthly active users access Facebook solely from their mobile devices, and the social network just announced its mobile ad biz represents 69% of the company’s $3.6 billion in ad revenue. Many of these ads are app install ads, pointing users to the various app stores for downloads. These targeted ads have proven to be lucrative for Facebook, and more relevant to end users in many cases.