Eventjoy, the event management platform and Y Combinator graduate that was quickly snatched up by Ticketmaster last fall, is today releasing a new version of its mobile application for event attendees that’s more of an overhaul than an upgrade. The new application introduces a number of unique, new features, including the ability for event attendees to chat in real time with event organizers, receive event announcements from organizers through push notifications, track social media mentions, and more.

According to Eventjoy founder, now a VP at Ticketmaster, Todd Goldberg, the Eventjoy app has been downloaded around 30,000 to 50,000 times and has been used in conjunction with a number of events, including those that aren’t your “traditional” conference, like beer festivals, concerts, bus tours, movie screenings and more.

Still operating as a small, four-person team within the larger organization, Goldberg says that being acquired was “like we raised a large seed round with Ticketmaster.” And, he adds, “as it turns out, running a startup isn’t that much easier post-acquisition.” The only difference is that you no longer have to worry about the runway or dying tomorrow, he says.

The upgrades to the Eventjoy app were something that the team had underway for some time, and are designed to make the app more useful to both organizers and attendees, while also differentiating its service from numerous event app competitors.

One of the more interesting new additions is Eventjoy’s embrace of the mobile messaging trend, as the app now allows a direct connection between the event goer and the organizer.

“We realized that communication is a big pain point during events,” explains Goldberg. The live chat feature will help to solve that, as now event attendees will be able to ping organizers in the app, in order to ask questions or offer feedback. For example, attendees could ask about schedules or where to park. Meanwhile, organizers can respond to questions directly one-by-one, or, in the case that a number of attendees are asking the same question over and over, they can use their own app to send out push notifications that address those questions via push notification alerts instead.

Also new in the upgraded app is a social media aggregator, which includes a live stream of Twitter and Instagram updates, as well as a way to see which Facebook friends are going to an event, and the ability to invite them to join you if they are not.

Organizers can also fill the app with more content than before, offering things like maps of the event, parking diagrams, photos of the venue, and other items. 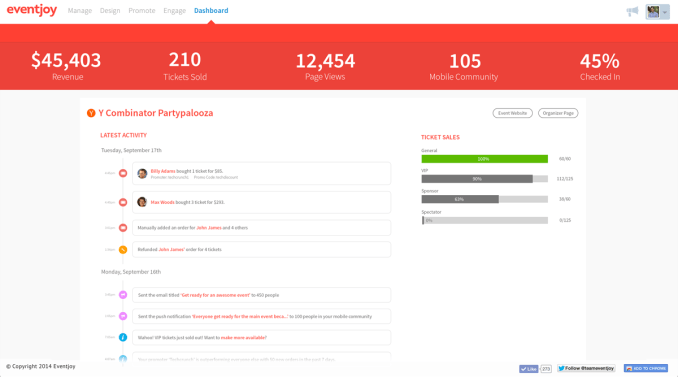 Eventjoy is still free to use, as it’s been working to gain traction. However, it has seen transaction volumes in the “seven-digits” flowing through its platform, says Goldberg.

The plan is to eventually offer additional, premium features as a way to generate revenue, including things like the ability to promote the event on Ticketmaster.com or create custom email invitations, for example. Some of these options will roll out later this year.

The company also has an API in the works, the founder notes. “We want to become a more open event platform that can power other apps that want to do their own discovery using our events, or if people want to build better analytical tools on top of the registration data we’re collecting,” Goldberg explains. The company has been testing the waters in this space through a recent partnership with crowdfunding platform Tilt, which sees it using Eventjoy as the ticketing engine that works behind the scenes for the crowdfunded events people post.

The new Eventjoy app is a free download here on iTunes.