When Google and Twitter receive legal threats from countries to censor controversial content or have their services shut down locally, they often publish them on ChillingEffects.org for transparency. But today when Facebook followed Turkey’s legal order to block a Page that defamed the Prophet Muhammad from Turkish users, it kept the demand private.

Rather than get banned, Mark Zuckerberg has said it’s Facebook’s duty to comply with censorship so it can keep operating and at least give some citizens a voice.

Since the Edward Snowden revelations, there’s been an increasing push for transparency in how tech companies work with governments. Most tech giants now publish transparency reports, but are widely barred from breaking out or being specific about how many requests they receive from the NSA.

But when some receive censorship ultimatums from abroad or DMCA copyright takedown notices in the US, they make them public. Google and Twitter both have large archives of notices they’ve shared on Chilling Effects. But Facebook abstains from this transparency practice.

Instead, the company has been beefing up its transparency reports with an interactive map the shows what types of content have been blocked in different countries like Turkey. These are only published every six months, though. 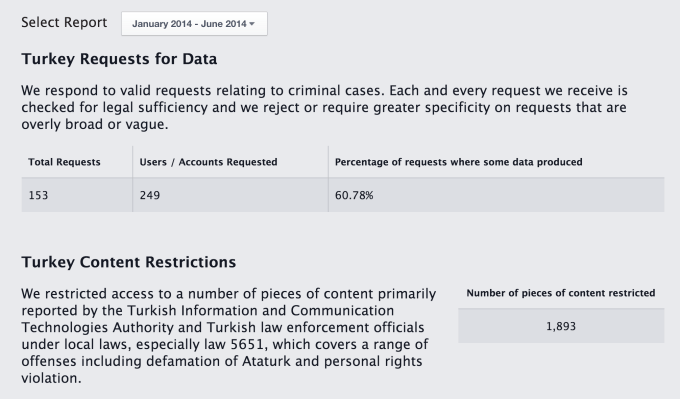 Some claim that Facebook is wrong to comply with censorship, and that it should accept bans. Facebook’s growth and advertising objectives are often cited as supposed reasons it complies.

However, Mark Zuckerberg recently commented on the censorship issue in a public Q&A saying one more country doesn’t add much extra ad money or growth. Instead, he defended his position, saying (paraphrased):

Zuckerberg’s perspective is open to debate. Complying with censorship implicitly encourages it, but a fundamental communication utility for millions getting shut down also silences forms of expression. Facebook declined to comment on this specific issue.

Regardless, it seems obvious that Facebook could maintain its current position while also being more transparent and publishing the demands it receives in a timely fashion. That could go a long way to convincing people it only censors when legally obligated to, and is doing all it can to fight back without cutting off citizens from their social network.