Curiyo, a company that makes software which consumers, bloggers and publishers use to enhance an online article with subtle links that direct you to useful facts and other information, has raised an additional round of just under $1 million in funding. Included in the round were both new and existing investors, crowdfunding platform OurCrowd, Morton H. Meyerson, Tom Glocer (former Reuters CEO) and Techra Investments.

The Jerusalem-based startup was founded in 2011 by Bob Rosenschein, the founder and former CEO of the site Answers.com.

For consumers, Curiyo’s software works as a free web browser extension for all the top browsers on both Mac and PC. Once installed, it places a lightly dotted line under words it recognizes and can link to, including things like names, terms and phrases that readers might want to learn more about. When users hover over the link, a question mark appears and they can click to see the Curiyo box pop up with more information that can be read without having to leave the webpage.

However, over the past year or so, Curiyo has been more focused on the business side to its service. The company offers a plug-in for blogging platforms, as well as integrations for online publishers that let them brand the Curiyo box themselves. For publishers, explains Rosenschein, product is about increasing readers’ time on site, showing visitors more data, insights and even social media posts, that are relevant to the terms and the article they’re reading.

“The pain point we try to address is people leaving the site,” says Rosenschein. “So much traffic today comes from Twitter and Facebook, from people that aren’t necessarily brand-loyal. They’re people who saw an article recommended, so they’re on the site. And every link is a one-way ticket off the site,” he adds.

Today, Curiyo is in pilot testing with a small handful of large media publishers. One is USA Today, which over the past few months has been trialling the product in its “Life” section. Here, readers have been using Curiyo’s links to learn more about names and other things mentioned in an article. For instance, following the recent SAG awards coverage, readers were clicking links to learn about some of the lesser-known actors who were nominated.

Curiyo’s content comes from a number of sources, including Wikipedia, social media, online videos and more. The idea is not to send people away to these other properties from the Curiyo box, but instead smartly curate the content on behalf of readers.

It’s “bite-sized, easy to digest information,” Rosenschein says, noting how it’s ideal for those who don’t have time to read a whole article and just want a snapshot of information.

The company also plans to make curation more of a focus going forward, the founder hints. 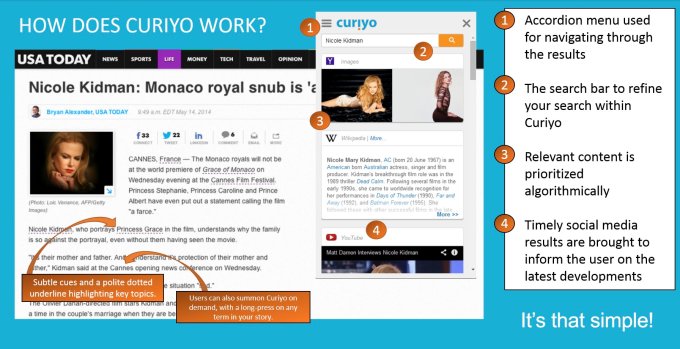 In addition, publishers will also in the future be able to monetize the space Curiyo provides using video, in-stream display, or native and premium sponsorships. While Rosenschein won’t comment specifically on the business model details, he did say the opportunity is there with the advertising model.

A mobile platform is available, too. On the mobile web, Curiyo pops open websites as separate tabs, while Curiyo’s current native apps represent demonstrations of the technology it’s making available to publishers for integrations into their own mobile properties.

The additional funding will be put toward hiring, growing the technology, and business development, as appropriate.

Curiyo is a team of five today, and had previously raised $1.9 million in seed funding. The company doesn’t plan to pursue an institutional round until the pilot testing phases with online publishers wraps up later this year.