Editor’s note: Tadhg Kelly is a games industry consultant, freelance designer and the creator of leading design blog What Games Are. You can follow him on Twitter here.

The question I’m always asking of any invention in the games-tech space is “can I see it being used every day?”. Or is it slight, a novelty or built on shaky assumptions of use patterns? Though early enthusiasm for such inventions tends toward “yes”, much of the time the true answer is “no”. Of course sometimes I’m right, sometimes wrong. Wrongness often (depressingly) arrives dressed in the uniforms of causes. Something HAS to work to solve a big problem I perceive therefore therefore therefore… This is less reasoning than buying a marketing story, but reason eventually prevails.

I could never, for example, see Kinect fomenting long term change in the gaming market. Though Microsoft sold a lot of Kinects by following the Wii wave, the devices were too flaky. I have similar doubts about the real appeal of the smart watch for apps and games, and also about virtual reality (a la Oculus Rift). VR is impressive tech, but nobody’s even close to explaining how it’s supposed to be a business.

Real change often comes slowly and – such as new platforms, new ways to play and so on – looks rather ordinary. Facebook’s platform, for example, seemed incidental at first. We game developers were mostly nonplussed that it could ever be a thing because it was so trivial. But it rocked our world. The numbers started to roll in and we started to pay attention in a hurry. Twas ever thus.

So it’s with that in mind that I want to go out on a limb and say I think Microsoft is onto something with the HoloLens. I’m referring to a technology that the company showed at its Windows 10 event earlier this week. It seems to be an augmented reality system capable of projecting faux-holograms to an eyepiece you wear. The net effect is the wearer “sees” a hologram in space all around him, and to back this up Microsoft’s presentation showed high concept uses like a designer working on an application on a monitor, but with a projected 3D model appearing to the side. That kind of thing.

The HoloLens is not the first device to enter the facespace. That conversation has been occupied for a while by Oculus at the power end and Google Glass at the convenience end. In essence HoloLens is trying to blend the two, forming a high definition augmented reality system within a constrained space. Of course this all sounds enthusiastic and pretty hokey, and the reality of such a device would likely be more ordinary. (I don’t for example, really see office workers walking around wearing bulky headsets just to be on Skype calls.) But I do think it’s more interesting than it initially appears, especially for gaming. It can solve a perennial UI problem.

In many games the screen area is cluttered by a HUD, that is the numbers that show you how much health your character has left, or experience points or levels. Those numbers are an essential aspect of a game’s feedback system, but they bring a visual noise with them. In some cases they hem in the world of the game and make it less impactful. For games that are trying to be immersive or story-driven, for example, experience point counters dinging away at the top of the screen can be distracting. Conversely UI elements also need to be constrained so that they don’t interfere with the main game too much. So games often have muddled UI/world compromises that never feel quite right. 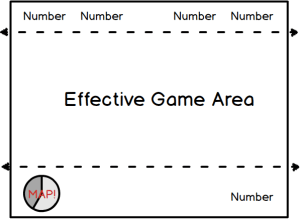 Now with the HoloLens idea (as explained) the everyday use of the system is not to create over-elaborate holograms doing funky stuff whose utility is likely nil after the first day playing it. Rather it’s simple: It lets a game designer push all those awkward UI elements out of the main screen. Like so: 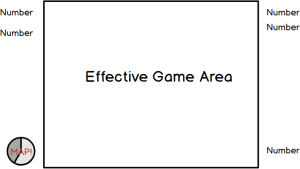 Its seems trivial, but think about it. How many action, roleplaying, storytelling and other games would be improved by having 30% more screen area dedicated to the game world? And how cool would it be to have lots of numbers floating in mid-space to the sides of the game rather than be hemmed in by constraints of the game world? Plenty. And that would be of great interest to many players such as Call of Duty fans and the like. A solid segment of them would buy that peripheral if it worked.

So what’s the downside? Well to be honest, it’s Microsoft’s tendency to get lost in Microsoft-world. Here’s an example: A couple of years ago I faulted Microsoft’s original vision of the Xbox One as being far too grandiose and trying to solve big problems that no real-world person had. One example was the TV enhancement features of the console, a massively complicated system that amounted to little more than a slightly faster menu for your Comcast box. Though the company has come on a ways from those heady heights, it still tends to get a bit swooped up in what technology might do, to the point that it forgets what it should probably do.

Another example: I was recently given an Xbox One for Christmas (no Kinect) and it’s a powerful gaming machine. It plays Grand Theft Auto V, Geometry Wars 3, Alien Isolation and a bunch of other games just great. I’m not wild about the joypad (something about the positioning of the central buttons feels slightly off) but it works well enough. Its big problem, on the other hand, is the user interface for accessing games, movies and other content. It’s a complete mess with a variety of use-patterns that make sort-of sense within their different sections yet adhere to no discernible overall logic.

Microsoft often gets itself wrapped up in these kinds of problems, creating many of them in one release and then clawing back from the brink in the next. Windows 10, for example, does not look like a shining beacon on a hill. It’s good in reflection only of how Windows 8 was terrible, and even at that the company seems determined to jam as much cross-ecosystem widgets in as it possibly can. So the issue is whether Microsoft can make HoloLens real, or will it get lost in fantasy.

My big hope for HoloLens is that it’ll come out as a coherent product that works with Xboxes and PCs to make cool UIs for games. That’s it’s “every day” use. My big fear is that it becomes another Surface. Not the modern one, the old interactive-table which was a neat idea that never found its way into the light of day. My fear is that HoloLens becomes another Kinect 2, so mangled by ambitions that nobody in the company can make a simple case for why it exists. My fear is that Microsoft gets too all-encompassing with HoloLens, tying too many bells and whistles to it and losing its simple appeal.

All I want to do is play games that do cool things to make UI work better. Microsoft please just sell me that.