I presume by now that if you are a Windows kid, you are using the newest build of the Windows 10 operating system, the recently released 9926 edition.

If you are, go ahead and select the clock in the lower right corner of your screen. It looks slightly mundane, does it not? I thought so. What if it could look like this (Image via Brad Sams): 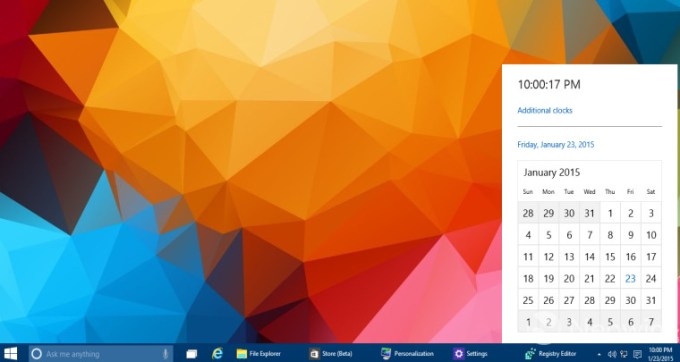 It’s not hard to turn on. I even managed it in one go. Here’s what to do:

Now, click on the clock once more and, voilà, you have the new goods. The market is still-stress testing the new build, but given the existence of the above still-hidden tools, it seems that more goodies are not too far away.

If you are not using Windows 10 yet, keep in mind that the operating system is still quite young when it comes to polish. You might not want to make it your daily driver. That said, as a long-time Windows user and fan of Windows 7, the new Windows 10 build feels quite a lot like ‘classic’ Windows, but with more, and not in a way that have found irksome. Your mileage will vary.

Microsoft is expected to release at least one more preview of Windows 10, likely aimed at developers, in coming months.