The newest pre-launch build of Windows 10 is now available for Windows Insider program members to download and install, and this edition brings a lot of features Microsoft showed off at its special Windows 10 preview event earlier this week. The most notable addition may be Cortana coming to the desktop, giving Windows PCs some of the virtual assistant smarts that Microsoft originally debuted on its smartphone OS.

Not everything Microsoft debuted is in this new build – some features are still being refined before they’re introduced into even the limited Insider beta testing pool. But you will get access to the new Start Menu today, with full-screen expansion powers when you switch between Tablet and PC mode on convertible devices. There’s also the new Settings app, which reduces confusion by combining the old Settings with Control Panel tools, too.

Other new bits include easy connection to wireless audio and video destination devices, like Bluetooth speakers and TVs that support Miracast remote viewing. New Photos and Maps apps offer seamless access to OneDrive photo backups, and the Windows Store has a new beta that completely reimagines the look and feel of the experience from top to bottom. The new Store Beta will live alongside the old version of the store for now. 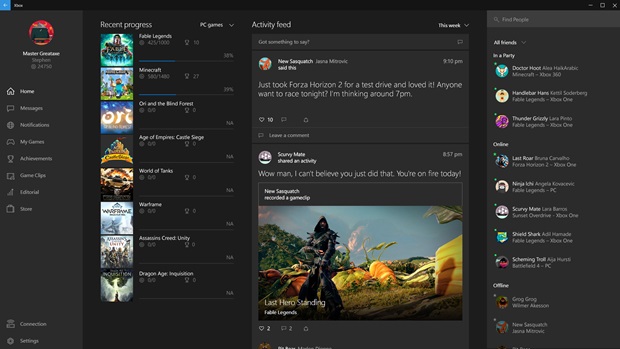 The new Xbox app is also introduced with this build, and brings games, friends, messages and activities from your Xbox Live account to your Windows desktop. Eventually this will bring full Game DVR, cross-platform play and more to Windows 10 PCs, so they can join in with their friends on Xbox One, and maintain a single gaming persona across platforms, extending even to Steam. This build doesn’t include the Xbox One streaming feature just yet, so those who want to remotely play their Xbox One games on their Windows 10 PCs will have to wait.