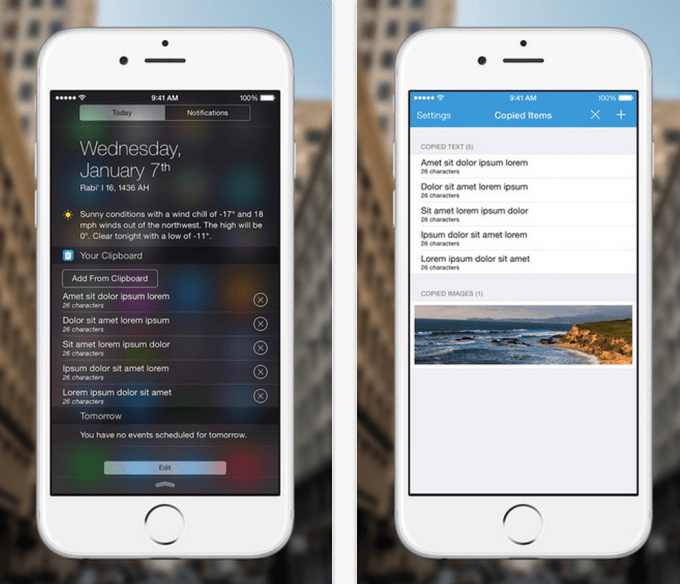 With the launch of iOS 8, Apple introduced a number of features that make it easy to send photos, text, or other data between apps. Between sharing extensions, HealthKit, and HomeKit, it’s easier for developers to make apps that talk to each other instead of acting like standalone silos.

Copyfeed is an iOS app designed to help in the few edge cases where you just need to grab a single link or snippet of text. It takes everything you copy and paste and organizes it in chronological order within the app or in an optional widget in the iOS Notification Center.

Maybe it’s an acquaintances address for a meetup that you need to grab from a group messaging app and send directly to someone else via a text. Or it’s a link that you want to add to Pocket from Twitter but you know your day might be interested based on the headline, so you want to save the link for after you sit down to read it.

For most situations, you’ll only need to copy and paste the item once and that’s that. But what if another friend says they’re going to the meetup at the last second and needs that address too? Then you have to go dig into one of your messaging apps and try to remember who you sent it to.

With Copyfeed you can simply open the app or swipe down to access the widget to quickly get to the most recent snippets. Once there, a single tap saves it to your clipboard, letting you paste to your heart’s content. If you copy any sensitive information, you can go into the app and permanently delete a snippet.

The app is free with ads, and there’s a $0.99 in-app purchase that unlocks image snippet management and removes advertising altogether. I tend to save photos to my phone if I think I might share it more than once, but removing the single ad at the bottom of the page felt worth the dollar.

I also scoped out other apps that fulfill this niche need. My favorite alternative is Heapo, which has the same app/widget system and also lets you send snippets to Chrome via an extension. I generally find that I don’t need those snippets except when on the go so that wasn’t a killer feature for me, but I know plenty of people who like being able to send everything between their phone and PC.