WhatsApp, the mobile (and now web!) messaging client Facebook acquired for now roughly $22 billion, is beginning to make things more difficult for customers who use third-party clients to access its service. While the official app is the most popular way to access WhatsApp, alternatives offering differentiated feature sets have also been available for some time. That may not be the case for much longer, though – WhatsApp has begun banning these apps, and temporarily blocking users from its service who are found to be using them.

One of the third-party apps, WhatsApp Plus, says it received a “cease-and-desist” from WhatsApp, and will be shutting down the service as a result.

On Google+, WhatsApp Plus’s co-owner Dr. Mounib Al Rifai says they are obligated to “remove all download links” and delete their online community.

“It was a fun ride but it has come to an end,” he writes. “Deepest regards from [WhatsApp Plus developer] Rafalense and me and all the whatsapp+ team for your support.”

The WhatsApp Plus community on Google+ has 700,000 members, indicating the app had a sizeable user base.

Users of another company’s client, WhatsAppMD, are also being temporarily banned from WhatsApp, according to reports.

Meanwhile, on the WhatsApp website, the company has posted a FAQ that explains the ban in more detail, and how it will affect users. Essentially, WhatsApp is making it clear that third-party clients like WhatsApp Plus are not supported, and may not be as safe as the official app:

Why am I banned for using WhatsApp Plus and how do I get unbanned?

WhatsApp Plus is an application that was not developed by WhatsApp, nor is it authorized by WhatsApp. The developers of WhatsApp Plus have no relationship to WhatsApp, and we do not support WhatsApp Plus. Please be aware that WhatsApp Plus contains source code which WhatsApp cannot guarantee as safe and that your private information is potentially being passed to 3rd parties without your knowledge or authorization.

Please uninstall your application and install an authorized version of WhatsApp from our website or Google Play. Then, you will be able to use WhatsApp.

According to the blog 9to5Google, users of third-party apps like WhatsApp+ are receiving messages that state they are banned from the service because they violated WhatsApp’s terms of service when trying to use their preferred clients.

The bans are temporary, however, just 24 hours. A countdown displays how much time is left in the block.

We understand now that the section in question in WhatsApp Terms of Service that’s being referenced here is section 5C, which includes a statement saying that you must not “attempt to gain unauthorized access to the Service or its related systems or networks.” 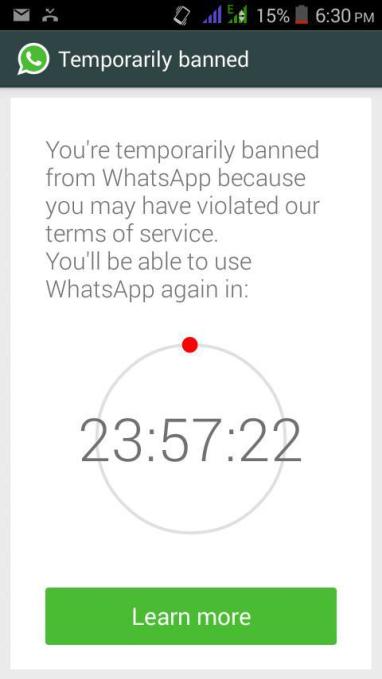 It’s an interesting tactic to go after users themselves in this case, punishing them for going outside of official channels to use WhatsApp’s service. That WhatsApp is doing so actually speaks volumes about how critical and heavily used its service is to end users. It knows its banned users will quickly come back. Many other companies wouldn’t risk alienating their user base over something like this.

That said, WhatsApp’s decision to ban third-party clients is not surprising, given the problems that these sorts of apps can cause for their parent companies.

In WhatsApp’s case, third-party apps are the biggest source of lost messages, but the risks don’t always end there, history has shown.

For example, last year’s massive Snapchat hack dubbed “the Snappening” came about due to insecurities in third-party applications. While Snapchat wasn’t technically at fault for the data breach, which exposed risqué photos from Snapchat users, it took a big PR hit at the time. And in reality, Snapchat was at least a little to blame – it allowed apps that reverse-engineered its private APIs to flourish, not shutting them down or discouraging their use in any way.

We hearing also that WhatsApp is planning to aggressively go after other unauthorized apps in the months ahead. Stay tuned.

Update: WhatsApp has offered TechCrunch an official statement on the bans –

Our goal is always to keep WhatsApp fast and secure for the people who use it – it’s the most important thing we do. Third parties that have built unauthorized functionality on top of WhatsApp create issues for people including lost messages. This goes against the experience we work hard to give people and we won’t let it continue. Starting today, we are taking aggressive action against unauthorized apps and alerting the people who use them. We will move these people over to WhatsApp so they can continue to communicate with friends and family reliably and safely.