A New York and Paris-based startup called Shapr has raised $3 million to build a better way to professionally network with others in your industry. However, unlike business networking giant LinkedIn, Shapr’s software is mobile-first, with apps for both iOS and Android devices that allow users to select a subset of their contacts who they really know and endorse, and then share those contacts with others in their network.

The company was founded in mid-2014 by Ludovic Huraux, who previously founded a French dating site called Attractive World, and earlier worked in private equity, along with Zane Groshelle, whose marketing background saw him working at startups like Songza and Prezi back in the day.

Says Huraux, the idea for Shapr came to him early last year because, as an entrepreneur, he loved to get connected with other people. “I was frustrated because now, [getting connected with others] is very random,” he says. Meanwhile, on LinkedIn, users are often connected to a number of people, some of whom they don’t know that well or haven’t kept up with in years, making it more difficult for online introductions to work as well as those that take place in the real world.

However, the founders stress, they don’t see Shapr as an alternative to LinkedIn, but rather a complement to it. In fact, the app is currently built atop LinkedIn’s platform – which could end up being a risky bet as LinkedIn historically has been more restrictive with regard to its API policies, negatively impacting the potential innovations that could emerge from the developer ecosystem. 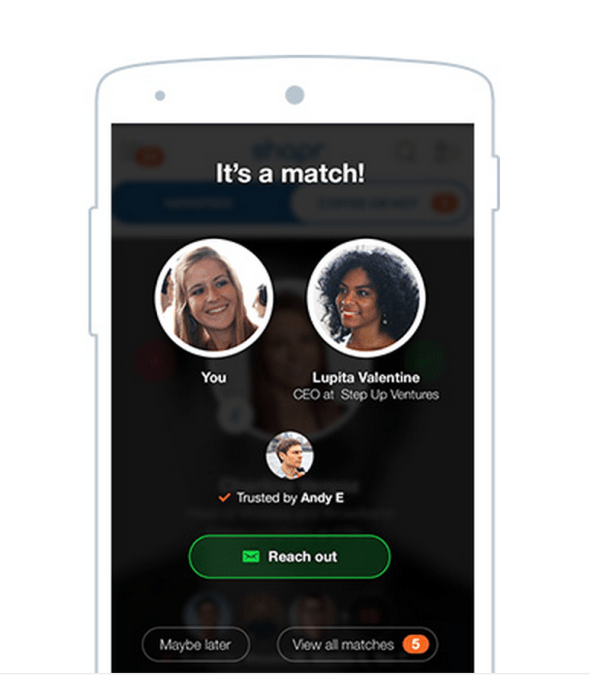 Today, the Shapr app lets you select up to 50 people you know and trust well enough to share your network with (your “Inner Circle”), and they then receive access to your connections. To mimic the serendipity of offline introductions, Shapr offers five daily introductions per day. Users view these five matches and can swipe left or right to reject or accept these connections via the app, similar to something like Tinder. Once both parties accept a match, they’re connected and able to chat.

Another feature called the “Shapeline” offers a more public, collaborative feed where users can offer advice, share opportunities, and further build their relationships.

The company competes in a space where a number of earlier professional networking apps have already tried to find new ways of making networking easier on mobile, either using proximity or shared interests as a jumping off point. Many of these startups, including Intro, ntro, Holler, Mingle and others, have since failed.

The problem with many of these apps is that those connections you really want to make – like connections to investors, for instance – aren’t often available using apps like these.

Investors, or anyone else with a high status or public profile, in general, are already dealing with an overabundance of connection requests via other channels, and aren’t looking to increase that inbound flow. So you end up networking with a lot of people in the same boat as you – those in need of better connections, not those who have them to offer.

Groshelle acknowledges this challenge, saying “people who already have a massive rolodex are maybe less motivated to use the service, but we still think it could be very valuable. We know a lot of people with great networks who still need to keep meeting new people,” he adds.

The Shapr app is a free download on iOS and Android.

Shapr is a team of 13 full-time based in both Paris and New York. The $3 million in seed funding comes from private investors, mainly in Europe, including Frédéric Mazzella, founder and CEO of BlaBlaCar.