There’s more funding for e-commerce companies in India today, after ShopClues — a startup that led the adoption of the marketplace model in the country — closed a $100 million Series D round.

Tiger Global, which raised a fresh $2.5 billion fund at the end of 2014, led the round. Existing investors, including Helion Venture Partners and Nexus Venture Partners, also participated.

ShopClues was founded in 2011, a time when most e-commerce services in India sold merchandize to consumers using an inventory-led model. Flipkart, Snapdeal and others have since adopted marketplace-based systems, which match third party retailers with consumers, but ShopClues was among the first to do so in India.

The company said it has 100,000 sellers who offer over 10 million products. It intends to grow those figures 100 fold over the next few years, in order to help “level the playing fields for SMBs to compete with other organized retailers both in the online and offline space.”

ShopClues claimed it sees 40 million visitors per month, clocking 1.5 million transactions over that period. It claimed 70 percent of its business is with consumers in second and third tier cities in India, and it ships to over 25,000 cities. 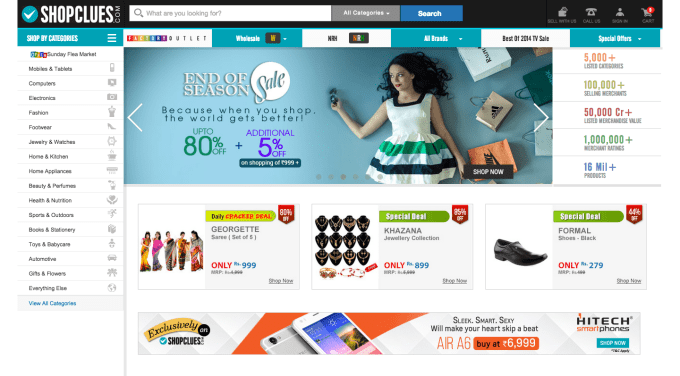 One notable difference between ShopClues and its perhaps more illustrious competitors — such as Flipkart, which raised nearly $2 billion from investors in 2014 — is that the startup is not focused on big ticket items like electronics and fashion. Instead, it said that “unstructured categories” account for two-thirds of its revenue.

Tiger Global was an early investor in Flipkart, and it took part in the company’s funding rounds last year too. It also invested in Myntra, a fashion-focused e-commerce platform that Flipkart actually acquired last year. Flipkart is in the market for more investments and deals, and this funding round could align it with ShopClues since they both now have Tiger Global in common. (Helion is also an investor in Flipkart, via its acquisition of Letsbuy.)

Flipkart isn’t the only one that might be casting glances at ShopClues. SoftBank and eBay are investors in Snapdeal, which itself raised more money last year and counts Nexus Venture Partners as an investor in common with ShopClues. Likewise, Jeff Bezos cut Amazon India a $2 billion check for growth, and it has been linked with acquisition deals in India, including Rocket Internet-backed Jabong.