Meituan, a group deals site sometimes described as “the Groupon of China,” has raised $700 million at a $7 billion valuation. The company announced the funding on its Weibo page and during a press conference in Beijing on Sunday, but did not disclose its investors.

Previous backers include Alibaba Group and Sequoia Capital China. TechCrunch contacted both to ask if they participated in this round. Alibaba had no comment, while Sequoia hasn’t responded yet.

Meituan’s last funding round was a mere eight months ago, when it raised a $300 million Series C from Alibaba, Sequoia, and General Atlantic. The company first raised $20 million from Sequoia soon after it launched in 2010, and then an additional $50 million from Alibaba and Sequoia in July 2011.

Meituan is one of China’s earliest group buying sites. The country saw a glut of similar businesses open soon after, but many shut down as competition increased.

Meituan was one of the few that managed to survive and continue to score VC funding. It is currently China’s largest group buying site by gross merchandise volume (GMV), with 20 million daily mobile users in more than 1,000 cities. While Meituan originally focused on group discounts, like Groupon, it now also functions as a marketplace for services from local vendors, including hotels, restaurants, and entertainment venues. 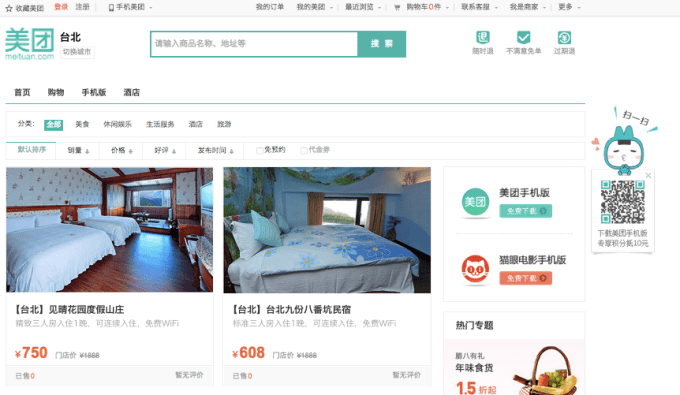 In the third quarter of 2014, China’s group buying market was worth 22.96 billion RMB (about $3.74 billion), an increase of 43.6 percent from the previous quarter, according to Chinese research firm EnfoDesk. Meituan’s closest competitor is restaurant listings web site Dianping.com, which is backed by Alibaba rival Tencent. Other players include Nuomi and 55tuan.

Meituan first broke even in 2013 and expected to double its revenue in 2014 from 16 billion yuan to 40 billion yuan (about $6.4 billion) last year. CEO Wang Xing has said that Meituan is considering a U.S. initial public offering, but will wait until at least 2017 to list.