When Google announced it was ending the Glass Explorer program yesterday and handing over the reins to Nest’s Tony Fadell, it seemed to exit with more of a whimper than a scream.

Let’s face it, from its earliest days, people loved to hate Glass.

In fact, from the moment Google announced Glass, people reacted harshly to the new technology. They simply hated the idea of nerds with computers on their faces who could take photos or videos surreptitiously. A new word, Glassholes, entered the popular lexicon to describe folks who wore Glass.

It didn’t seem to matter that we were in the public eye with smartphones all around us taking video and pictures. The idea of a wearable optical device seemed to rub folks the wrong way.

And Google encouraged a sense of elitism by creating the Glass Explorer program, an exclusive club where for the price of $1500, if you were chosen, you could own your very own Glass.

The Explorer program was really a stroke of marketing genius. Google got people to pay for the privilege of beta testing their new wearable technology and reporting back to the company with their findings. 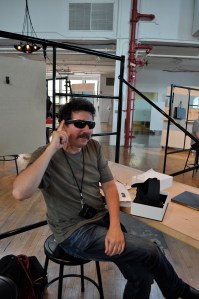 And yes, I actually went through this program; traveling to New York City in June, 2013 for my very own Google Glass adventure. I ponied up the money for the chance to be able to try the latest and greatest wearable, and Google made me feel pretty special in the process.

I was, after all, one of the chosen few; invited to their posh New York City offices and given a private fitting. Of course I had to pay my own way to get there, and pay for the device.

Being one of the chosen few, it turns out wasn’t cheap.

And after I got it home, I found I actually didn’t like a computer on my face or the interface Google had designed for it.

I found it uncomfortable looking up to see that small screen. What’s more, the operating system consisted of a carousel interface. You could move up and down and side to side within that interface, but your email, texts, tweets, whatever you were reading was on cards and you cycled through them by touching the side of the device. I found this awkward and I imagined that over time as more tools developed, the carousel itself would become overcrowded.

You could also use your voice, “OK Glass.” But I pictured people in the checkout lines at supermarkets all, muttering commands to their wearables. It didn’t seem like a plausible way of interacting with a computer in public on a regular basis. 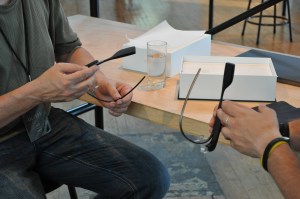 As it turned out, I wasn’t going to spend $1500 on an item I didn’t enjoy using. I found myself having to force myself to use Glass because I simply didn’t like it.

In the end, I returned it within the 30 day trial period for a full refund, happy that I had a chance to use the advanced technology, but not willing to make an investment in something I didn’t like and that wasn’t ready for prime time.

I tried a later version of it last year at SXSW and I felt they had improved it, but clearly Google never felt it was ready for public consumption. They never chose to actually release it as a commercial product. Perhaps they sensed what I felt when I tried it, that it would never fly as a mass-consumer device.

Yesterday didn’t necessarily represent the mothballing of Google Glass, but it probably marks the end of any chance of it ever becoming a consumer product. Who knows? Perhaps under the leadership of Nest’s Tony Fadell, it has a shot at becoming a business tool.

I’ve always thought that the best utility for Glass could be in certain niche business situations, perhaps a technician fixing a machine could use it to find necessary documentation, for which it would make sense to have a gadget sitting on their face to keep hands-free.

Whatever happens to Glass now, I still see it as a noble experiment on Google’s part. They tried to find out how far we could go with a wearable device and what society was willing to put up with. It turned out we weren’t terribly comfortable with it, especially the notion of the camera — even while we were seemingly fascinated with it at the same time.

People are still trying to figure out where wearables belong, and if it’s really necessary to have a machine on our wrist, or our face, or hanging off our lapels. Maybe the phone is good enough, but Google tried to push the boundaries, and even though I didn’t like the end result, I still think it was worth the effort.