Bellabeat, the maker of a trio of health trackers for moms and moms-to-be, is now broadening its focus to include a feature set designed to appeal to all women after selling out of its initial pre-orders, netting the company $1.2 million in revenue. With the Bellabeat Leaf, a piece of “smart jewelry” that can be worn as a necklace, pendant, bracelet or brooch to track activity, sleep and stress levels, the company is adding new features to the app and device itself that allows women to track their overall reproductive health.

That is, the Leaf will be updated to allow you to track and be notified about your period, contraception intake, and ovulation period – features that make sense for those looking to conceive, as well as those who are not.

The Leaf is one of three items in Bellabeat’s lineup of health trackers for women, which also includes the Bellabeat Shell – a monitoring system for expecting moms – and the smart scale called the Bellabeat Balance.

What’s appealing about the Leaf isn’t only the functionality it provides – it’s one of only a few activity monitors that also tracks breathing (as a proxy for stress levels) – but also its form factor. Unlike some wearables which tend to include bulky, plastic-y bands that make them look more like sports watches, the Leaf is made of recyclable European wood and steel, and looks like jewelry many women would actually wear. 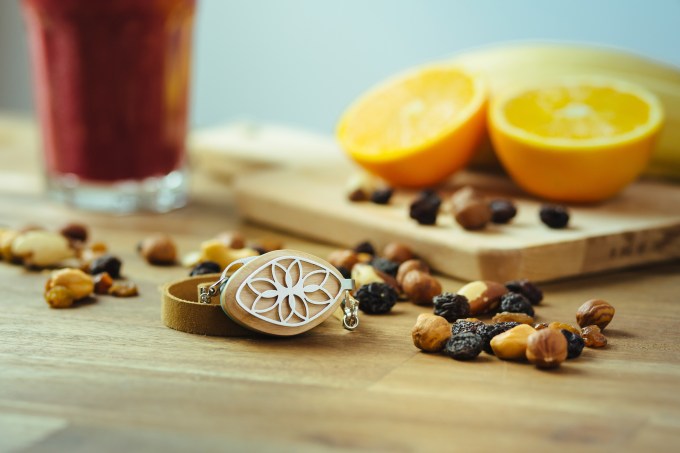 Bellabeat co-founder Urška Sršen says that the Leaf is now one of the company’s most popular products, alongside the Shell.

The startup’s first batch of pre-orders have sold out – the 10,000 units generated $1.2 million in revenue, she tells us. “The Shell and the Leaf were the products that received the most interest,” Sršen notes. “That gave us a proof-of-market that women really want well-designed products made just for them.”

Now the company is entering the retail market, with plans to feature its devices in targeted stores in order to raise the brand’s visibility and awareness. Currently, Bellabeat has secured 65,000 of wholesale pre-orders for all retailers combined, mostly in the U.S., but also including a handful of global markets like the U.K. Australia, and China. The plan is to have the devices in U.S. stores by the end of Q1, and in the other markets later in the year.

Those who have committed to sell the Bellabeat in-store include Target, Best Buy, Bloomingdale’s, John Lewis (U.K.), Selfridges (U.K.), Apple Reseller Stores (U.K., GCC) and Orange (FR, U.K.) In addition, the devices will be sold online on Amazon and Taobao.com as well as on the company’s own website, where you can register to be alerted when more pre-orders become available.

“We have also received interest from Apple in distributing our products worldwide as Leaf will be a great addition to smartwatches, especially Apple Watch,” adds Sršen.

She hints, too, that the company has partnerships with fashion brands in the works, but can’t disclose details until the deals close.

Plus, the startup has brought on Miss California (and first-runner up for Miss America 2014), Crystal Lee who is now sporting the Leaf as the company’s first brand ambassador.

What’s interesting about the Bellabeat product line is that it focused on an area that many health trackers were ignoring – new and expecting mothers. This demographic is happy to spend on items that let them connect with their child, whether that’s buying a music system to play tunes to the womb, or, as with the Shell, letting moms hear their baby’s heartbeat. (The same device later identifies baby’s cries, plays music, and serves as a home monitoring system that tracks temperature and humidity.)

“We have gained substantial interest from our customers that are far from the tech-savvy San Francisco crowd,” says Sršen of the company’s growth. “And that proved us that wearables have a huge product/market fit outside of fitness and activity tracking alone.”