BTC value fell below the $200 mark for a brief period overnight, a move that is causing many Bitcoin bulls a bit of concern. The currency has been falling steadily since the holiday and is now at or below the levels set when BTC exchange Mt.Gox imploded.

It is currently at $186.53 and relatively stable. However, that price is a far cry from the heady $1,000 days of late 2013, a price that I doubt we’ll ever see again. But, unlike Robert Redford’s sailing trip, all is not lost. 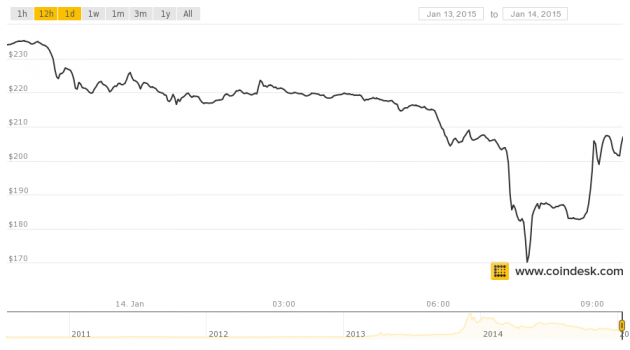 There are a number of factors affecting the price right now. First, mining and trading is becoming less interesting, a fact that is sending bitcoin prices into a death spiral. Whereas the investment into mining gear made sense at $600 per BTC, it makes far less sense, given the current difficulty and hardware spend, to focus on BTC as a money-maker. Trade volume surged as the price fell, a side-effect of investors leaving as the risk rose.

Bitcoin isn’t frothy now because bitcoin is boring. The Russian currency crisis did not spur much of a buying spree and the Bitstamp debacle – an exchange hack that essentially shut down one of the biggest BTC traders – came and went without much comment. The early “too-to-moon” naïveté is gone, replaced by a drumbeat of blockchain investments from big names in the industry. Last January I lamented Bitcoin’s image problem. This January I think that image problem is almost fixed.

Our own Alex Wilhelm asked me once what would happen first – whether Bitcoin would rise to $10,000 or fall to 0. I didn’t answer at the time because I didn’t know. But my hunch, now, is that the salad days are over. Those who bought high will sell low and those who bought low will sell at a slight profit – but not enough to warrant a torrent of joyful Tweets or Reddit posts. In short, Bitcoin will become the tool it was meant to be: a decentralized value store that allows buyers and sellers to take part in trusted transactions. If you planned to put your kids through college on your early mining proceeds you’re probably going to want to look at a state school. But if you want to send your freshman daughter a few bucks and don’t want to pay a bank onerous fees, you might be in luck.