In a time when IBM has been dumping its x86 server business, and the mainframe would seem a relic of a bygone day, Big Blue took five years and invested a cool $1B to develop a new mainframe beast for the modern mobile era.

You want a high-end computing system for a contemporary company, the new system dubbed the z13, is smokin’ and has been designed specifically to handle high-volume mobile transactions. In fact, IBM claims this machine has the ability to process 2.5B transactions per day, the equivalent of 100 Cyber Mondays every single day, or so they say.

IBM celebrated the 50th anniversary of its System/360 mainframe last April, a system which you could say was an early antecedent to the z line  In spite of many changes in enterprise computing, this approach has endured in some areas.

Mike Gilfix, who is director of enterprise mobile at IBM said with its latest model, the company paid particularly close attention to the growing complexity around mobile transactions and designed the system to handle the intricate interplay between systems, while maintaining security with what they are calling “real-time mobile encryption,” and providing high-end analytics on the fly.

As an example, he talked about a single eCommerce transaction on a mobile device. When we touch Buy, he explained, it requires a bunch of different systems to communicate including credit card transactions, inventory control and shipping — and they all have to work in tandem. He said when you extrapolate that out into billions of transactions moving across conventional networks, the power of the z13 can eliminate much of the lag. 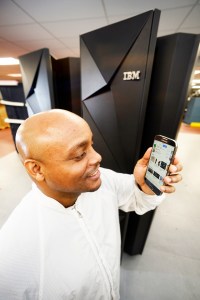 “One of the reasons we are really excited about mobile is that it has become one of the key drivers driving growth of usage, whether we are talking eCommerce, healthcare or finance. Everyone is looking to mobile to get information they couldn’t get before and supplement our daily lives,” he told TechCrunch.

It’s a tall order, but if this machine behaves as advertised, it is the mainframe for today’s company. The question of course is if there still a market for mainframes. While Gilfix wouldn’t share the cost of this machine, you can be sure it’s not cheap, and there are other options out there including cloud computing, but he pushed the power and security of this machine as reasons companies might want to opt for this instead of another computing approach.

It’s worth pointing out, last April InformationWeek reported that the mainframes of today that IBM sold for $1M in 2003 were going for $75,000. IBM wouldn’t share the cost of this one, but my guess is it falls somewhere in between those two figures, especially with this unit’s hardware configuration.

This is not just some souped up X86. According to IBM, the z13 comes packed with “the world’s fastest microprocessor, 2X faster than the most common server processors, 300 percent more memory, 100 percent more bandwidth and vector processing analytics to speed mobile transactions.” That’s some serious horse power.

Gilfix suggested that the majority of sales would probably come from existing customers in finance, large retail customers and healthcare, and others who have a large investment in data stored on mainframes already. Still, the company is hoping that the mobile nature of this system will attract buyers who might not have considered a mainframe in the past.

One scenario Gilfix suggested is using the z13 as a private cloud and running OpenStack on it, which is certainly an interesting idea.

A 2012 Reuters article reported that IBM still had mainframe customers numbering in the thousands, but that is very likely in decline as the market consolidates. IBM seems to be betting that a new mainframe in a modern package will help keep the market going.