Vouch Financial, a social lending startup founded by ex-PayPal and ex-Prosper alumni offering customers loans with lower interest rates, has raised $3 million in new funding, according to an SEC filing. The company also confirmed the investment details to us, noting that the round, led by Alex Rosen of IDG Ventures, actually closed last year but had yet to be disclosed. Other investors contributing to what’s being characterized as a seed stage round include Greylock Partners, First Round Capital, and a number of angel investors, detailed on AngelList.

Fastly co-founder and former Wikia CEO Gil Penchina, who knew Vouch’s co-founders previously, was the first angel to invest in the startup, and also sits on the company’s board.

The startup is now one of several in the “alternative lending” space, which also broadly includes Prosper, Lending Club, Kabbage (Karrot), Lendable, Zopa, Funding Circle, OnDeck, CAN Capital, and many others. Some of the earlier entrants in this area were true peer-to-peer lenders, but today many more are “marketplace lenders.” Some focus on lending to individuals, while others focus on small businesses.

Vouch is aimed at consumers, however, and is not currently operating as a peer-to-peer or marketplace lender – the money loaned to individuals comes from Vouch itself for now. That choice is largely due to its status as a being a “beta” service. In the future, the loans’ funding source may change.

What the company does differently from competitors is that it aims to leverage a person’s social network to make loans cost less.

The company was co-founded in 2013 by CEO Yee Lee, previously of PayPal, Slide, Skype and more recently, VP of Product at Katango (acquired by Google), and CTO of One Jackson (acquired by TaskRabbit); Sue Korn, previously VP of Finance and Head of Operations at peer-to-peer lending marketplace Prosper; and Hugh Olliphant, longtime PayPal vet who sold the company IP from his company gMoney in 2003. The Vouch Financial team also includes several other execs and engineers hailing from PayPal, Prosper, and Google.

The idea with Vouch is to give consumers a way to receive lower interest rates on loans by having other family members and friends “vouch” for them.

Explains Lee, “it’s kind of an old concept…to say that, if you’re the kind of person who’s being ignored by our current financial system, who do you turn to for help? Well, generally, your friends and family.” Lee says what’s novel about Vouch is this idea to actually plot that network and a user’s social ties as related to credit worthiness within an application like his. “If we can help map out that trust network, then maybe those would be interesting relationships to draw on for access to financial services,” he adds.

Those vouching for others will complete a short survey that asks them to detail how they know you, the borrower, and how financially responsible they think you are. They’re also asked if they’ll be willing to contribute if you become unable to make payments on your loan. (Answering ‘yes’ is not required to vouch for someone, Lee notes.)

Those vouching can also sponsor loan recipients with some amount of money, starting at $25.00, or they can choose to offer a higher amount. In these cases, if you default on your loan, those sponsors would pay that vouched amount back to make good on the loan.

The startup looks at a number of explicit and implicit factors to determine what interest rate it offers a borrower using this social data, including things like how “vouchers” answered survey questions, how quickly they responded to a request to vouch for a friend, response rates for vouch requests, the overall size of someone’s network, how many vouchers took the extra step to also sponsor a loan, and much more. 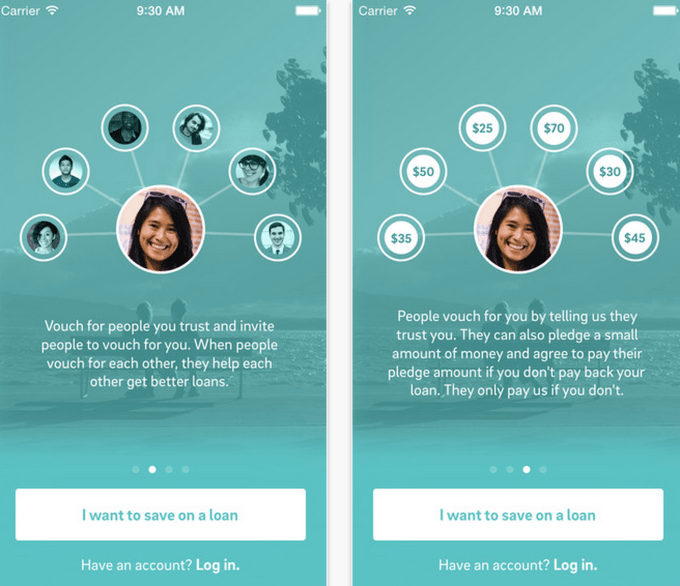 During this pilot testing period, Vouch offers installment loans of $500 to $7,500 paid back over the course of one to three years, with interest rates between 5 percent and 30 percent. It also examines more traditional criteria, too, including FICO scores, and status of the borrower’s other accounts. Borrowers have to a legal U.S. resident, and, generally speaking, have to have a FICO score of 600 or higher, be current on all existing accounts, and not be in bankruptcy or foreclosure proceedings.

However, Lee says that during testing, some of these rules have been in flux, and it has serviced loans from all different walks of life, ranging from those in more dire need to those just building their credit.

There are also fewer fees with Vouch at present, as compared with some other lenders. The company doesn’t assess an application fee, nor does it charge an annual fee or prepayment fee. There’s an origination fee of 1 percent to 5 percent, when you’re sent your money, however, and late payment fees are 5 percent of your payment amount (with a minimum of $15).

What’s notable about this startup, besides the social aspect to the lending process, is that it initially targeted users by way of a mobile application. While also available on web, 70  percent of testers are on mobile.

Currently available on iOS, users can download the Vouch app, sign up, and then check their interest rate on a loan (without impacting their credit score), vouch for others and ask family and friends to vouch for them in return.

Vouch has not yet “officially” launched, even though its website and app are live. The company plans to exit beta in a few weeks, says Lee, and will increase its loan size to $15,000 in the near future.

Based in San Francisco, and currently participating in the Fall 2014 session at StartX, Vouch is a full-time team of 19.