Rdio, the music-streaming service founded by Skype co-founder Janus Friis that offers 30 million songs in 60 countries (and very soon to be 61, with an India launch on the cards), trails behind Spotify and Deezer in the race for paying music streaming subscribers. But today it announced a raft of integration partnerships that it hopes will boost its ubiquity, and hence adoption.

First, Rdio announced connected home device deals with DTS, Google, Hisense and LG Electronics to embed its music service into more connected home devices as part of its bigger “anytime, anywhere” strategy. Later in the day, it added a pair of car deals to the mix: a partnership with Bosch and another with Jaguar Land Rover. The Bosch deal is an exclusive and international deal to integrate Rdio and make it the main music streaming partner for Bosch’s mySPIN connected dashboard service.

Rdio says the Jaguar and Land Rover deal will make it the first in-car on-demand music streaming service on the InControl Apps platform.

Through the Rdio app on InControl Apps, a groundbreaking technology that links smartphones to a vehicle’s infotainment system, drivers have access to Rdio’s more than 30 million tracks on-demand directly on their dashboards. Rdio’s award-winning user experience has been customized for InControl Apps, so drivers are now able to utilize Rdio’s familiar user-friendly navigation and features in the way they are accustomed.

“If you look at what’s happening at the moment, users are listening to more music on a growing number of devices and in all these different places,” CEO Anthony Bay said in an interview earlier today. “Our vision is to offer every song ever recorded, on any device, anywhere in the world, instantly tuned to each listener.”

The deal to expand Rdio’s presence in connected homes will include pre-loaded Rdio apps on Hisense smart TVs and other connected devices, expanding what Rdio already offers through Roku and the Rdio button on its remote control. Other places where Rdio offers services include an app for Google Chromecast.

Other Google-related services still to come include upcoming HTML5-based smart TV compatibility. LG, meanwhile, will integrate Rdio via its Connect SDK home-streaming platform, which works with mobile devices that speak to smart TVs and connected audio devices that use Google Cast.

Further details of what the partnerships will mean and where Rdio’s services will appear are only due to be made more specific later in the year, the company said. 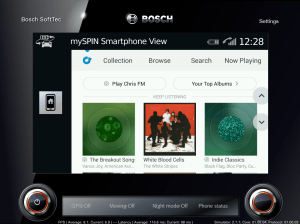 On the car front, Rdio will not be the first or only music partner for Bosch on mySPIN: it already had an existing partnership with Pandora, which appears to remain intact. The interesting thing about the Rdio service is that it’s propelling the company to rethink how to design the interface of Rdio. Similar to TV’s, the car poses constraints for how users can browse and discover content, so the aim is to pare everything down.

The car has become a significant battleground for music streaming services keen to get more paying subscribers signed up to their services. They are taking a cue from SirusXM, which has managed to amass 27 million subscribers through its in car radio service.

While these integrations will make the Rdio service potentially more useful for consumers, it also raises another interesting possibility: the idea that the service is better off being paired with a hardware player (à la Apple and its iTunes/Beats strategy) rather than existing as a standalone service. Bay, who had previously help run the video service at Amazon, is more skeptical.

“There may be synergies for music streaming companies to bundle with others, but I think of media companies are more natural homes,” he said. A hardware partnership would tie down Rdio too much to one brand and set of devices, and Bay believes that no device company, bar Apple, has demonstrated that it can carry off running and building a music service. He believes Netflix or Sirius provide more optimistic models for Rdio — both have build strong businesses around digital services independent of the hardware on which they are consumed.