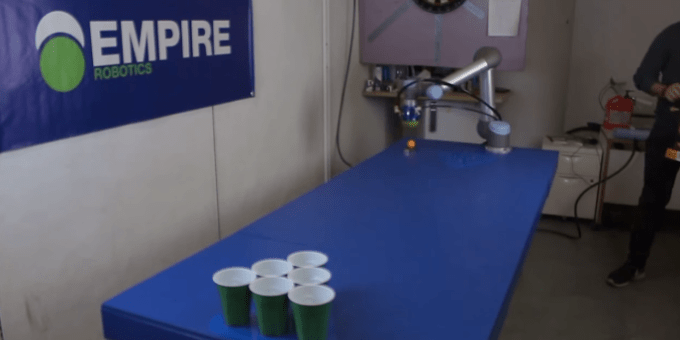 Robots. They can wipe the floor with us at Flappy Bird, Ping Pong, and chess.

At least we’ve still got the last great bastion of human sportsmanship that is beer pong, right? Wrong.

Built by Empire Robotics to show off yet another thing that their trippy spherical robot gripper “hand” is capable of, watch on as it destroys the competition in one flawless turn.

If you’re not familiar with Empire Robotic’s Versaball robot, it’s worth checking out just for the “oh damn, that’s clever” moment you’ll have when you realize how the “gripper” is able to pick stuff up.

The short version of how it works: that ball is stuffed with a sand-like material. They push air into the ball, allowing the sand to move easily within. They push the air-filled ball onto whatever object needs to be gripped — then suck the air out of the ball. Remove the air, and the sand has nowhere to move. Now it has a perfectly-formed grip on whatever it was wrapped around.

As a bonus, the ball itself is made of a cut resistant material — so even when inflated, sharp things like knives and broken glass shouldn’t hurt it too much.

Empire Robotics will have a booth at CES, where challengers will be able to take it on head-to-head. Alas, unlike a human challenger, the robot probably doesn’t get worse after a few too many rounds.