No single bad PR incident can impact Snapchat’s growth or popularity, it seems. Earlier this year, the mobile social network made headlines when thousands of Snapchat accounts were hacked, causing around 200,000 private photos – many of a decidedly racy nature – to be leaked publicly to the web. Meanwhile, Snapchat’s tone-deaf response to the event – dubbed the “Snappening,” a hat-tip to the iCloud photo breach which had been referred to as the Fappening – was to point the finger at third-party apps which had reverse-engineered the Snapchat API. But Snapchat’s explanation also meant the company was essentially blaming its own user base – the victims – for putting themselves at risk.

One would think that such a data breach and the company’s subsequent nonchalance about its impact would cause some sort of blip in terms of Snapchat’s usage or growth. But that’s not the case at all, as it turns out. In fact, the opposite is true.

Despite the bad publicity, the outrage, and even reports that the leaked photos contained child pornography (as roughly half of Snapchat’s user base are between the ages of 13 and 17, it’s been said), Snapchat appears to have withstood little damage as a result of the hack.

In fact, in the U.S., Snapchat’s monthly active users stayed relatively flat on Android – and they’ve actually increased on iOS in the days and weeks following the “Snappening” leak, according to data from analytics firm 7Park. 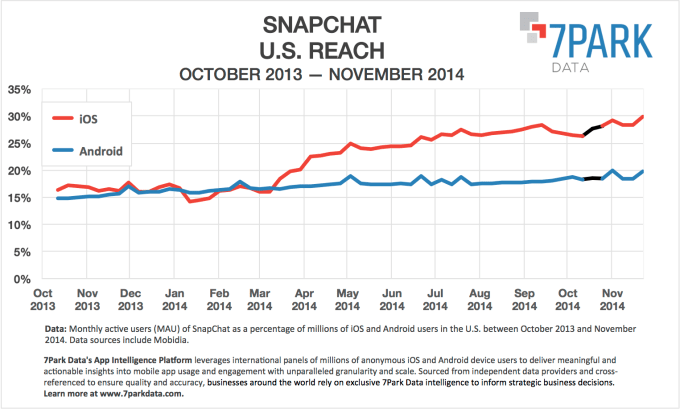 For background, news of the “Snappening” hit around October 9th, and began to be covered in earnest by a number of mainstream publications the following day and for several days thereafter. During this period, and the weeks that followed, one might expect that Snapchat users would be reacting to the breach by limiting their usage of the service, or even stopping altogether. But that never happened.

The next week (October 12-18), that metric only slightly dips to 85.8% on Android, but on iOS, it increases by several percentage points to 86.4%. In the weeks that follow, the growth of that metric fluctuates a bit on each platform, but by the week of November 16th-22nd – over a month after the “Snappening” – the numbers are up again by several percentage points from when the “Snappening” made news. (Android: 89.4% and iOS 87.7%).

What this shows is that not only did the “Snappening” hack not cause a decline in user engagement on Snapchat, those numbers actually continued to increase even as news of the data breach spread. In addition, as of the week ending November 22nd, active users spent 66.03 minutes on Snapchat per week across 89.71 sessions*, averaging 0.74 minutes each. That’s up from 48.59 minutes across 75.96 sessions from roughly a year ago, when session length was at 0.64 minutes apiece.

Or more simply put, the average Snapchat user in the U.S. is opening the app around 90 times per week. That’s insane engagement, but competitors like WhatsApp do even better (it’s opened around 120 times per week.)

And finally, Snapchat has pretty solidly maintained its app store ranking in the U.S. during and after the data breach. According to App Annie, on iTunes, the app was ranked #4 in Photo and Video and #9 Overall on Oct. 9th. Today, it’s #4 and #10, respectively. On Google Play, the app ranked #3 in Social and #6 Overall at the time of the hack, and today ranks #3 and #10, respectively – hardly a massive decline. 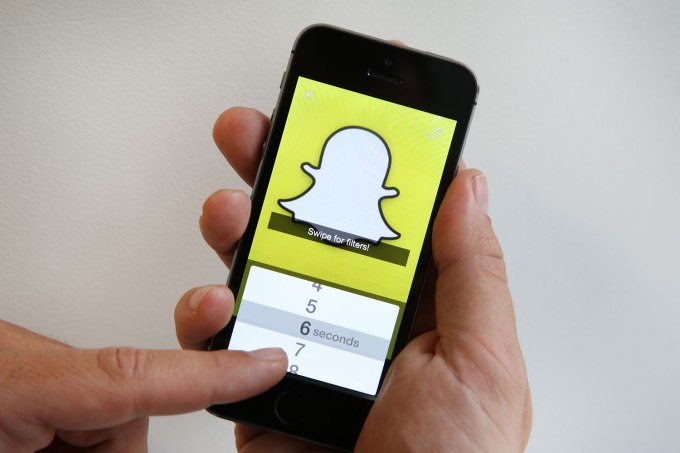 Today, Snapchat is said to be the #3 social app among millennials. But among the broader audience, the social network is still fighting its reputation as being the “sexting” app for teens and young adults – Snapchat photos disappear after being viewed which makes it better for this task than traditional SMS, and of course that’s been a use case for the app. That’s also why it was targeted by hackers – for all the nudes.

But Snapchat has been working hard to create a feature set that offers more than private, “ephemeral,” photo sharing. It launched a new kind of temporary sharing with the debut of Snapchat Stories last year; it rolled out the collaborative and more public “Our Story” feature this summer for curating photos from around a big event; and more recently, it added Snapcash, a way to send money to friends through Snapchat.

Users and brands are building audiences on Snapchat, which is reportedly valued at over $10 billion. And recent revelations from the Sony hack indicate that the company is hardly resting on its laurels. In the works is a music feature, for example, among other things.

The bigger takeaway here from the “Snappening’s” impact – or lack thereof – is that Snapchat has grown a big enough, stable enough and engaged enough user base that any one bad PR incident won’t be the company’s downfall. Or perhaps it’s true what they say after all: there’s no such thing as bad publicity.

* Just to be clear on how sessions are recorded by 7Park: if a user opens Snapchat but then gets a text or navigates away to another app, when they return it’s counted as a new, unique session.