Built for the tastes of power users with an interface that anyone can understand, Workflow is a new app for iOS that lets you create shortcuts for the things you do all the time on your phone or tablet. With a simple, efficient interface, it lets anyone automate things like creating GIFs from the pictures in your photo roll to ordering an Uber going to the address for the next event on your calendar.

You can create action extensions (a new feature in iOS 8 that you can bring up by tapping the share button) that save the URL of the page you’re on to Evernote and also saves a PDF copy of the page to Dropbox in case you’re worried it might go away. You can access your shortcuts within Workflow or turn them into semi-apps in themselves via bookmarks on the home screen (with a customizable icon).

There’s a variety of pre-built shortcuts in the Workflow gallery, but the app encourages you to build your own shortcuts based on how you use your phone. In fact, the first thing you do when you open the app for the first time is build the previously mentioned “create a GIF” shortcut.

The app is able to throw first-time users into the task because the shortcut-building tool is deceptively simple. As long as you know what you want to do, you can pretty much build it. Shortcuts are composed of actions, which refer to very specific functions in other apps, like ‘select photos’ or ‘send a message.’ Those are the simplest actions — more advanced ones let you look at your calendar and pull in things like maps and your music library. 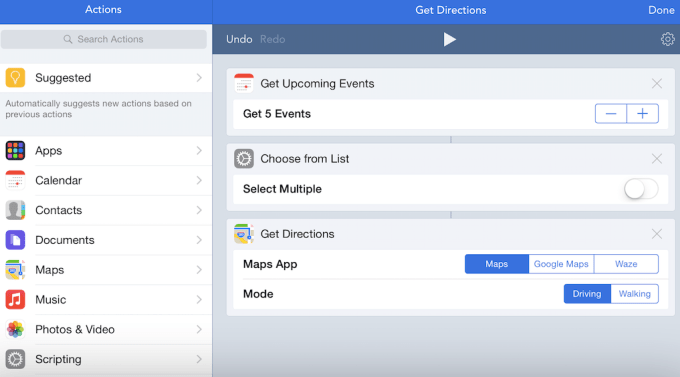 Adding more complex tasks doesn’t make using the app any harder to use — you’re just choosing from the same list of actions. Even turning photos into GIFs and using outside services like Dropbox require little more than switching toggles or choosing how many of something you’re going to select.

I’m sure that there are Apple power users who would pay as much as $10 for this, if not more. At $2.99 — a launch price that could move up or down — Workflow is cheap enough that anyone who bounces around between apps for complex tasks should consider investing in it.