In October, we spotted that Amazon had quietly launched a hidden and functional app store within its main Android application which was available for download on Google Play. Now, according to new reports from varying sources, Amazon’s flagship application’s listing is no longer available via search from within Google Play, though its direct link is still live. Additionally, there’s now a newly launched application called Amazon Shopping which looks much like the original application, but no longer includes the Appstore section.

The change was first spotted by German site Caschys Blog who also received a statement from Amazon which claims that this is related to a September update that brought Amazon’s Prime Instant Video to Android users. That update involved having users update to or install the newest version of the main Amazon app, then download the Amazon Instant Video Player app afterwards, in order to watch Prime Instant Video on their Android devices.

Amazon has sent us the same statement as well, confirming that after Amazon released its updated app in September, Google changed its policies. This required Amazon to submit a new app as a replacement. Says Amazon:

We launched a new Amazon App for Android Phones on September 9 that provides an award-winning mobile shopping experience, enables customers to discover and purchase all of Amazon’s digital catalog, and provides customers access to the Prime Instant Video player and unlimited streaming of over 40,000 movies and TV episodes. Google subsequently changed their Developer Distribution Agreement on September 25. As a result, we removed the app from Google Play and published the Amazon Shopping app. Customers who want the best Amazon experience on their Android phone, including access to Prime Instant Video and Amazon’s entire digital catalog, can still get the Amazon App for Android Phones at amazon.com/androidapp.

In case you missed it earlier, Amazon’s app was changed in September to include a new category called “Apps & Games.” Amazon didn’t exactly publicly announce this change, however – its press release at the time only mentioned that the app “now enables customers to discover and purchase all of Amazon’s digital catalog” but mainly touted the Prime Instant Video integration.

When we reached out to Amazon in October after finding the functional app store tucked away inside the main app, a rep confirmed that: “we now offer the ability for customers to purchase videos, songs, audiobooks, apps and games from within the Amazon app.” 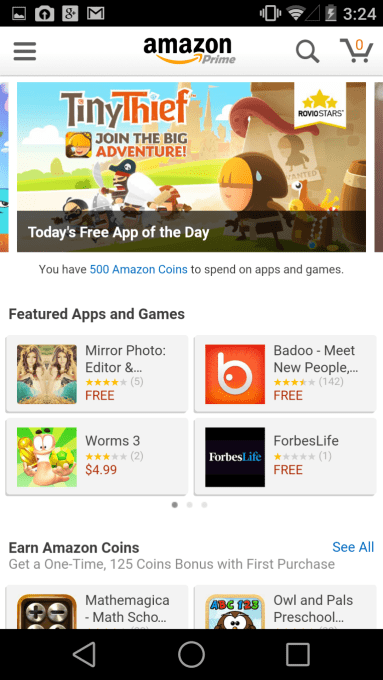 The new “Apps & Games” category wasn’t just a list of apps that Amazon has for sale elsewhere in its standalone Appstore app (an alternative to Google Play) – it was actually a complete app store in and of itself, right within the main Amazon application.

Users could browse, search, install and buy apps directly from Amazon’s main application without having to jump through as many hoops as they would have had to otherwise, by installing the standalone Amazon Appstore app.

Instead, the first time a user tried to download an app, they were prompted to “enable downloads” if they haven’t already adjusted their Android phone’s security settings to enable downloads from outside of Google Play. Amazon’s app also walked users through these steps making the entire process very simple.

We wondered if Google would be okay with Amazon – a competitor to Google on devices, app discovery and more – would be allowed to continue to operate a hidden app store in its shopping application. After all, it doesn’t permit Amazon’s Appstore app to be directly downloaded from Google Play either.

Apparently, it seems that Google was not cool with this at all.

The older, flagship application from Amazon is now no longer discoverable through Google Play search, and we’re having trouble pulling up the new application “Amazon Shopping” as well, though your mileage may vary. (App store direct links often go live ahead of search results listings.) 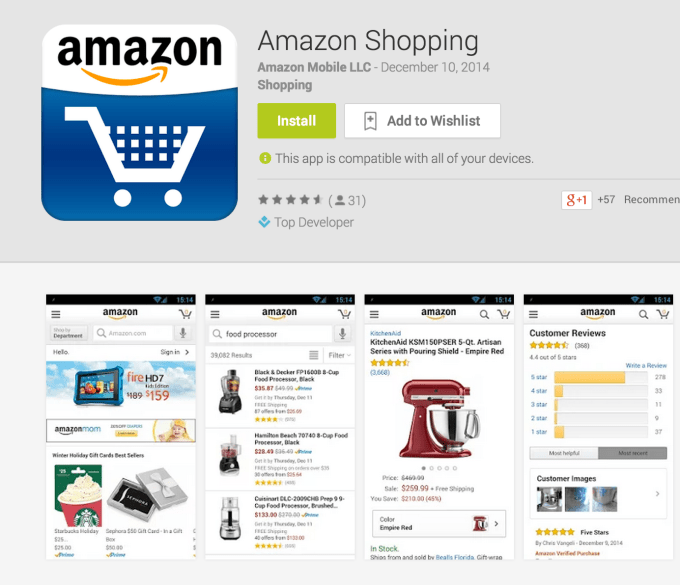 Going forward, as Amazon’s statement indicates, the functionality Amazon released this fall in its main Amazon app – including Prime Instant Video Streaming and the ability to download movies, apps and games – has now been relegated to yet another standalone application.

Users who visit this site are asked to take a series of steps similar to what’s required with downloading the Amazon Appstore standalone app. That is, they have to request a link to the app download, then change their device’s security settings to allow for its installation.

Google has not responded yet to a request for comment.