Mobile internet is all about big numbers. Revenue will more than triple to $700 billion by 2017, there was over $19 billion invested and $94 billion exits in the last 12 months, average sector returns were up to 15.6x all of the money invested over the last three years, public stock market returns were up to 78 percent in the last year, and there are 32 billion-dollar mobile Internet companies already.

Understanding what’s driving these big numbers is critical for entrepreneurs, investors and corporates, so let’s dig in. 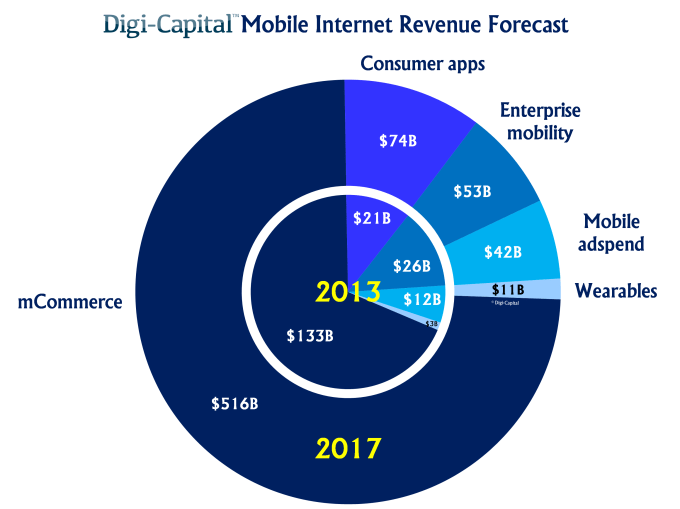 This is the Asian century, so it’s not surprising that the largest region for m-commerce growth will be Asia with almost half of global m-commerce at $230 billion. America ($144 billion) and Europe ($113 billion) remain massive growth markets, but Alibaba’s swing to 42.9 percent mobile sales from less than 10 percent a year ago shows Asia’s strength today. 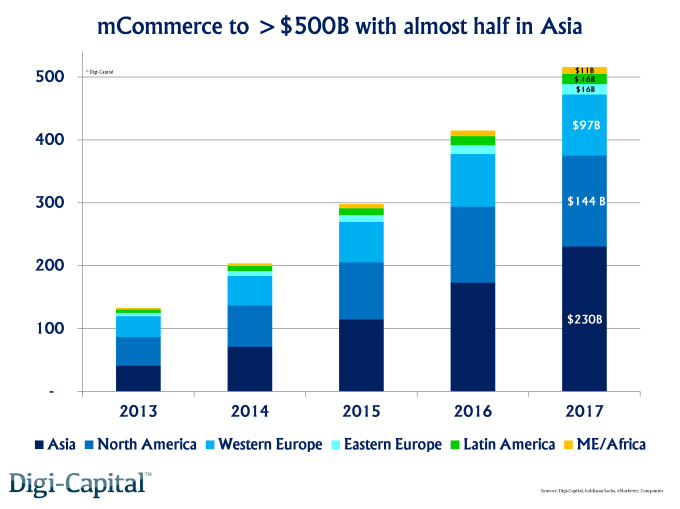 Consumer apps will deliver over $70 billion revenue by 2017, but will grow beyond the dominant mobile games market. Mobile games drove three-fourths of all mobile apps revenue last year despite having only 40 percent of downloads, but other sectors (such as social, where Facebook’s revenue growth is all mobile) could take over half the market by 2017. 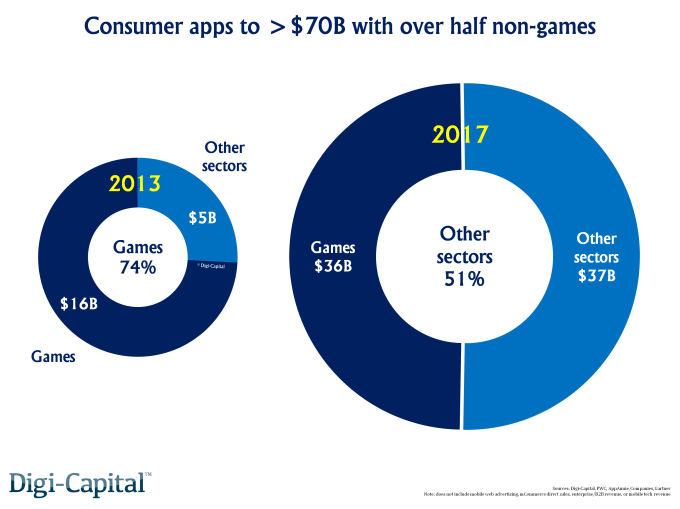 Mobile Internet startups raised a record $19.2 billion private investment (excluding IPOs) in the 12 months to Q3 2014, up 232 percent on the corresponding year to Q3 2013. The big money went into m-commerce ($4.2 billion), travel/transport ($3.3 billion), utilities ($1.8 billion) and games ($1.1 billion), with 10 other mobile Internet sectors raising over half a billion dollars each (food and drink, enterprise/B2B, social, tech, advertising/marketing, messaging, medical, photo and video, music and finance). 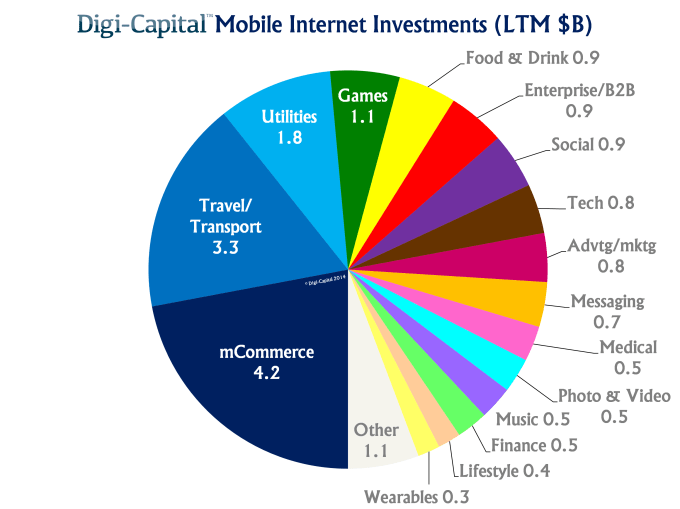 Mobile Internet exits (trade exits/M&A and IPOs) rocketed 7x to $94 billion in the 12 months to Q3 2014. The massive Facebook/WhatsApp trade exit made the biggest splash, but a hot IPO market took 39 percent of all exits (50 percent excluding WhatsApp). 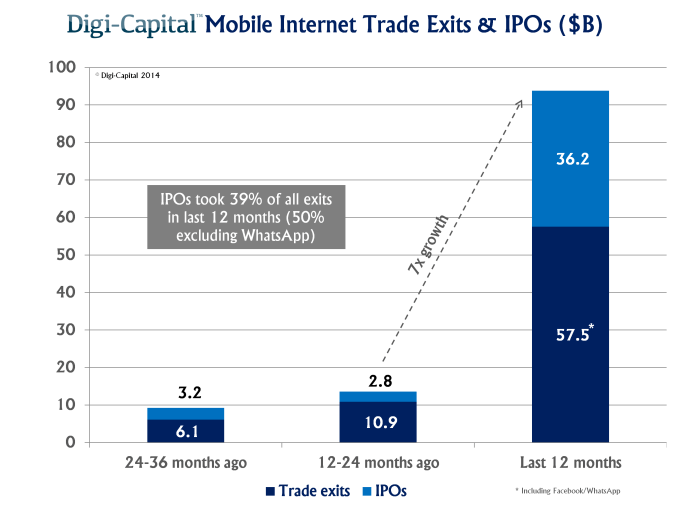 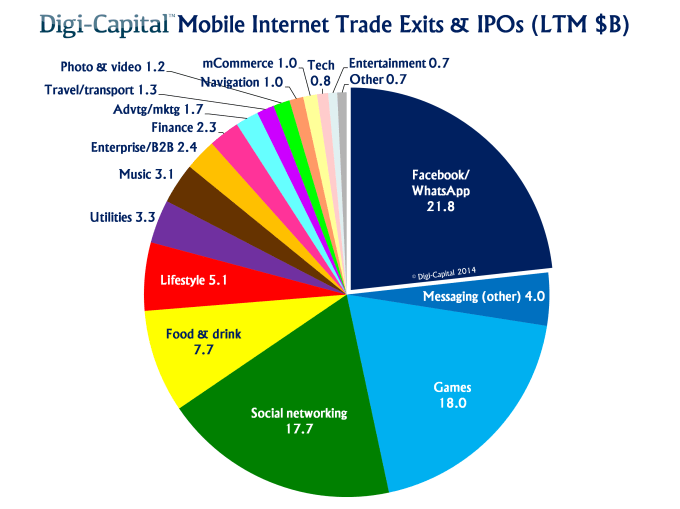 Early-stage investors typically hold investments for at least three years, and the three-year average return on investment for mobile Internet to Q3 2014 was 3.5x. That doesn’t sound exciting, until you realize this is the return on all the cash invested in all 27 mobile Internet sectors over the last three years. Compared to comparable VC/private equity benchmarks of less than 1.2x, 3.5x is nothing short of spectacular. 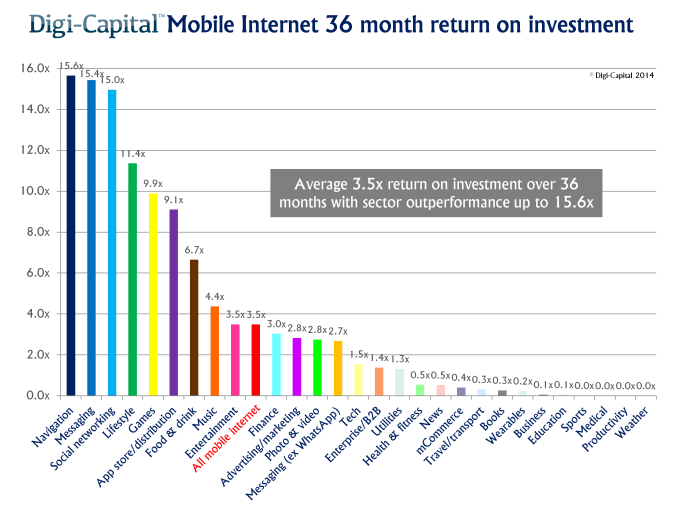 5. Public stock market sectors returned up to 78% in last 12 months

Institutional investors have seen their faith in mobile internet justified, with the Digi-Capital Mobile Internet Index of 78 public companies in and around mobile internet giving a 28 percent return in the last 12 months (versus 20 percent for the S&P 500). There have been even stronger performances across the 15 individual mobile Internet sector indices, with travel/transport (78 percent), social networking (45 percent), navigation (43 percent), messaging (40 percent) and games (39 percent) outperforming the all-mobile Internet (28 percent) return, and tech (27 percent) just below it. 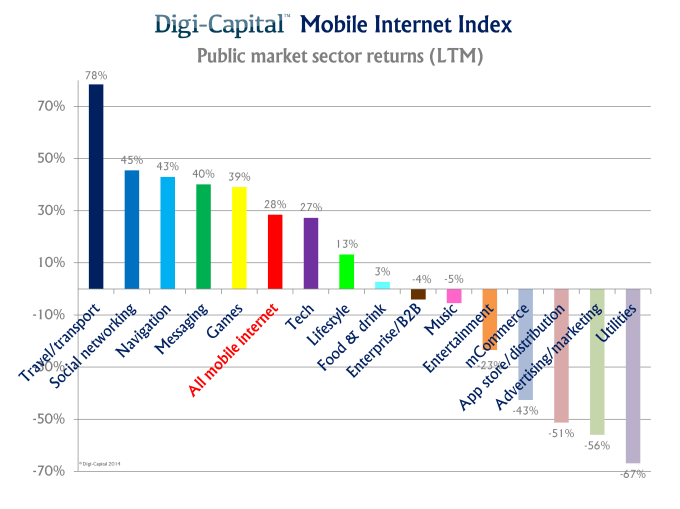 Sector averages are great, but Digi-Capital’s Mobile Internet Billions list analyzes the 32 billion-dollar companies that added $11.4 billion shareholder value in Q3 2014 alone. That’s $125 million value added every day of Q3 to reach a combined $163 billion valuation. While some are household names, such as Twitter and WhatsApp, you might not have heard of others like Colopl and Momo. 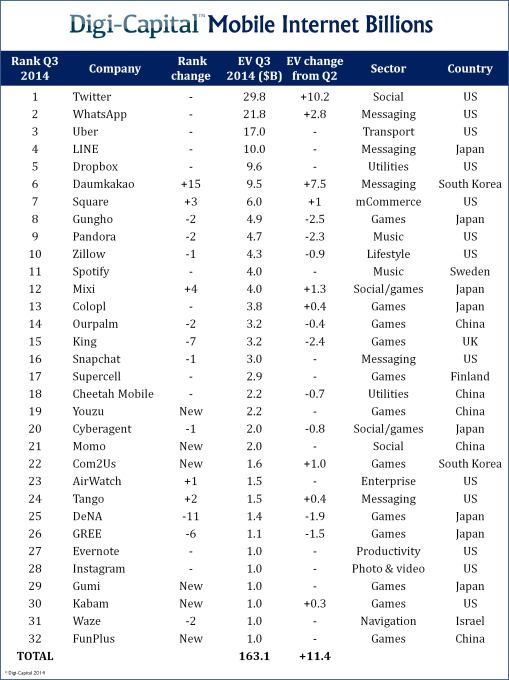 The companies listed all have substantial parts of their business from mobile Internet, but exclude mobile infrastructure (e.g. Qualcomm), device (e.g. Apple) or substantial but minority mobile Internet businesses (e.g. Tencent with WeChat). The valuations come from a mix of stock markets, acquisitions and fundraising rounds.

As well as adding huge value collectively, there has been a lot of movement in the rankings. Daumkakao (merger of Daum and Kakao) leapt 15 places to a worth of $9.5 billion, followed by Mixi, Square, Tango and AirWatch. Youzu Interactive, Momo, Com2Us, Gumi, Kabam and FunPlus are new to the list, while DeNA, King, GREE, Gungho, Pandora, Waze, Zillow, Snapchat and CyberAgent all lost places. 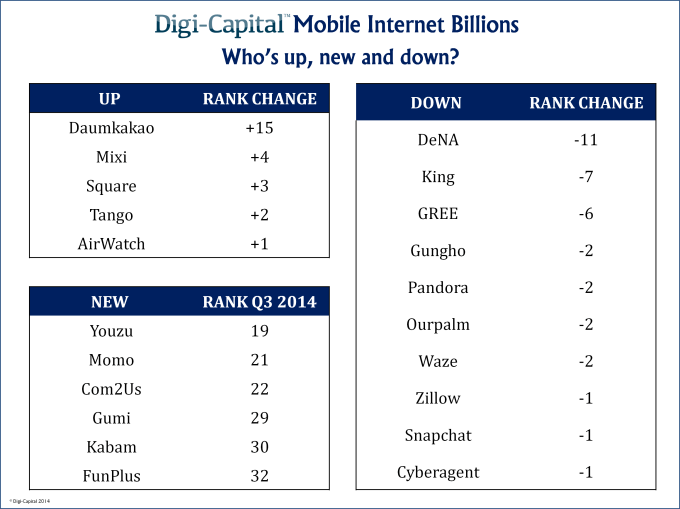 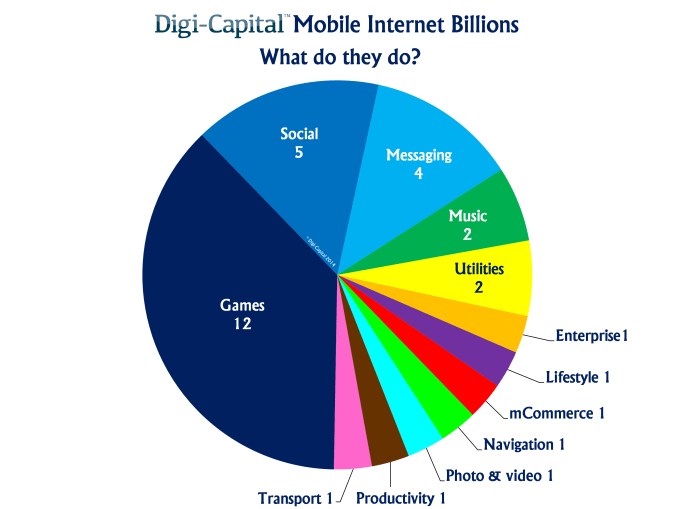 Geographically the list is dominated by Asia (15) and America (13). Although Asia has the most Mobile Internet Billions companies, they are divided between Japan (8), China (5) and South Korea (2). Europe has Finland (1), Sweden (1) and UK (1), with Israel (1) the only Middle Eastern entry. Looking forward to the 2015 list, our analysis shows Asia’s domination will increase and spread more broadly across the region. 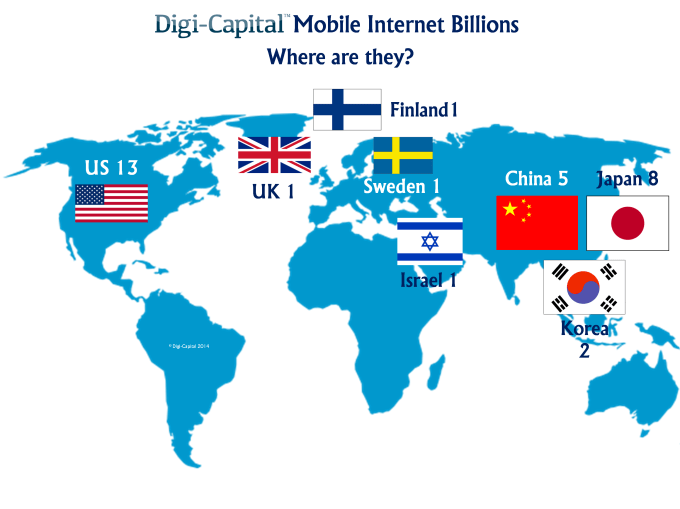 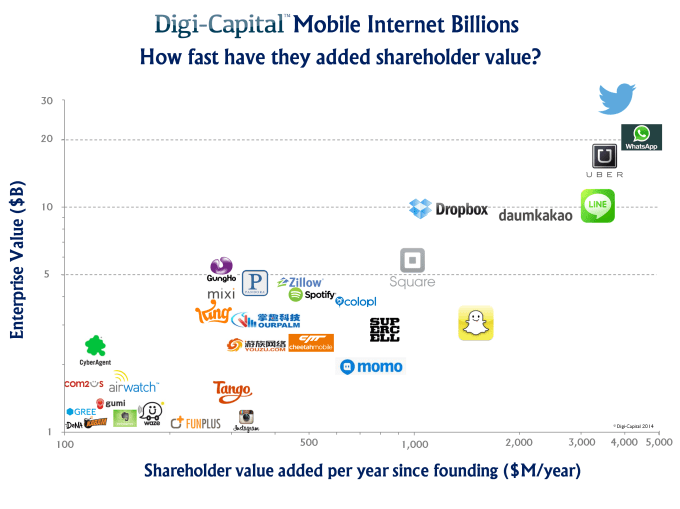 There are still selective opportunities in health and fitness, music, photo and video, messaging, lifestyle, travel/transport, utilities and finance. This analysis does not guarantee any one sector or company will be a good or bad investment. 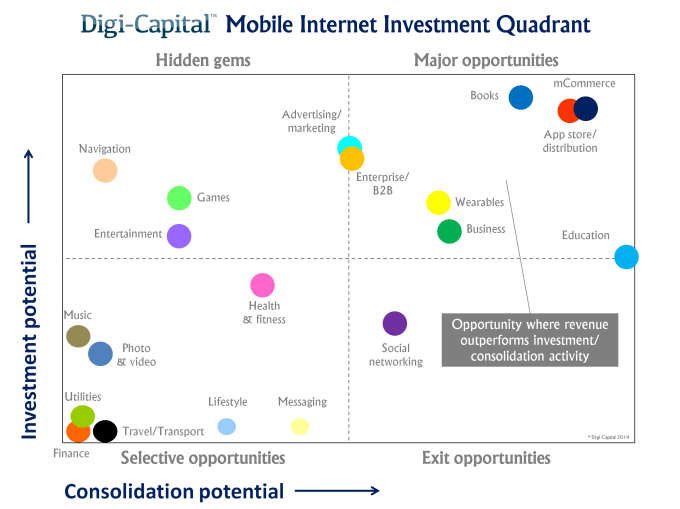 The last 12 months have been incredible for mobile internet, but our analysis shows the best is yet to come for entrepreneurs, investors and corporates. Read more here.