Not content with leading a $627 million mega-round for Snapdeal and a $210 million raise for Ola as part of a $10 billion commitment to startups in India, Japanese telecom giant SoftBank has now turned its attention to Southeast Asia and sunk $250 million into GrabTaxi, Uber’s major rival in the region.

Neither party has confirmed what the deal values GrabTaxi at, but the company’s valuation is likely to exceed the $1 billion mark. The duo did confirm that SoftBank has become GrabTaxi’s largest investor.

The round is the highest raise for a startup in Southeast Asia to date — Rocket Internet companies aside — and it is GrabTaxi’s fourth funding activity this calendar year, taking it past $320 million in capital from investors. GrabTaxi’s previous $65 million round closed in October and was led by Tiger Global — which also invested in Uber rival Ola — while GGV Capital led a $15 million raise in May. Its $10 million-plus Series A was announced in April.

GrabTaxi was founded in Malaysia in 2012, has over 500 staff and is live in 17 cities across six countries in Southeast Asia: Malaysia, Philippines, Thailand, Singapore, Vietnam and Indonesia. Its core offering is a service that connects registered taxis with would-be passengers via its app — thus working with the existing industry rather than against it — but it also offers an Uber-like private car service and is trialling motorbike taxis in Vietnam.

Uber is present in each of GrabTaxi’s markets, offering its standard Uber Black service in all and its cheaper UberX service in most. Hailo is present in Singapore, while Rocket Internet-backed Easy Taxi is a minority player in a handful of countries in Southeast Asia.

Uber doesn’t break out user numbers, but GrabTaxi — which says it is leading the taxi app space in Southeast Asia — claims 500,000 monthly active users from 2.5 million app downloads. It says there are 60,000 drivers on its network, and that three bookings are made per second on average across its platform — which is an 800 percent increase over the past year.

Back in May, GrabTaxi claimed 1.2 million downloads and 250,000 monthly users.

This Series D round comes at a fascinating time. Uber raised $1.2 billion earlier this year and is tipped to be closing in on another billion-dollar round again soon at a rumored $40 billion valuation. GrabTaxi, it seems, is building its own war chest, and bringing on a formidable ally in SoftBank, at just the right moment. 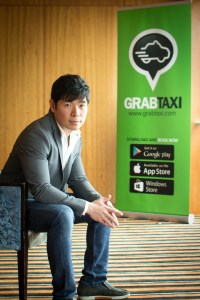 GrabTaxi didn’t explicitly reveal how it will invest the money from SoftBank, but CEO and co-founder Anthony Tan told TechCrunch in an interview that it will go towards fortifying its efforts in existing markets and continuing its expansion across Southeast Asia.

There are no plans to move outside of the region, which has a cumulative population of around 600 million, he said.

“We’re going to be staying regional. [We want to] grow very fast and focus on expanding in this region, whilst staying very very focused,” Tan commented, speaking after the Bloomberg ASEAN Business Summit in Bangkok, Thailand.

“We’ll also be hiring. We want the right kind of people, people who love people and believe in our mission,” he added.

Related to that, Tan said GrabTaxi is open to potential acquisitions, but he stressed that in any possible deal, the focus would be on finding the right cultural blend.

GrabTaxi has been focused on providing a pure-play transportation service to date. Uber, however, has experimented with a range of alternative services across the world. While he didn’t explicitly advocate that GrabTaxi will follow suit, Tan did admit that the company’s new funding intake gives it “the resources” to potentially explore new areas of business in the future.

Harvard graduate Tan admitted that the price battles between rival services in Southeast Asia necessitate significant funding just to compete, although he said GrabTaxi still maintains the “heart of a startup” — such as working hard, traveling via economy class and low-cost carriers where possible — and generally being thrifty.

While Uber has raised boat loads of money for its operations, the company is engaged in every continent on the planet. That’s something that could mean GrabTaxi is actually better capitalized, which Cheryl Goh, GrabTaxi’s VP of marketing, hinted.

“Our strong focus in this region means that each of [the] six GrabTaxi markets stands to receive a significant portion of funding compared to larger players that have to stretch their funding much further,” Goh said in a statement without explicitly mentioning the ‘U’ word.

While SoftBank provided the entire round for GrabTaxi, TechCrunch understands that the startup had multiple alternative offers on the table. That certainly bodes well for the future, since GrabTaxi’s track record and the ongoing battle will almost certainly require further rounds of funding in the not-too-distant future.

Uber, GrabTaxi and others have come under pressure from the governments of Vietnam and Thailand this past week, and numerous other regulators in the past. Tan didn’t provide specific comment on either of those incidents, but he did reveal that GrabTaxi has set up a dedicated government liaison team that works directly with authorities across Southeast Asia to help smooth out issues and communications. 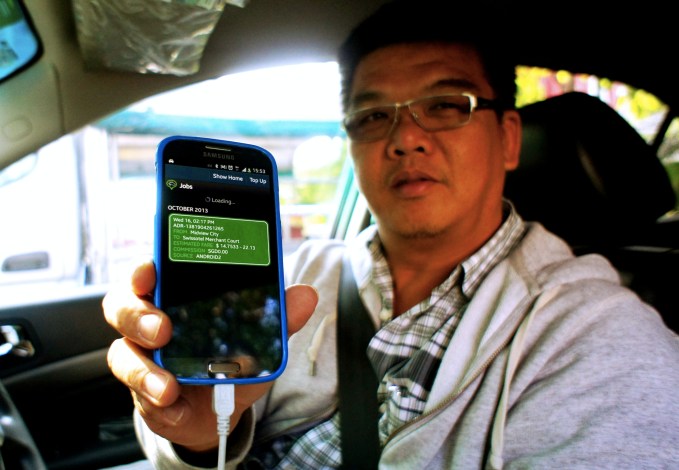 When I put it to Tan that many founders will want to know how he’s been so successful in Southeast Asia, he points to his faith in God and his company’s mission to make a difference.

“There are a lot of well-run startups in Southeast Asia. We hope that the values we’ve been pushing for — helping drivers make more money, women feel safer and more — and changing the current ecosystem and how we treat each other makes a difference,” he explained.

With SoftBank and its renowned founder Masayoshi Son on his side, Tan’s company is closing out the year in a very different position to how it began 2014. Then it was an outsider that was full of ambition and plans but lacking resources. Now it has gathered steam in multiple markets and pulled in the financial muscle to potentially battle Uber, one of the world’s most talked-about companies, blow for blow.

Certainly, 2015 is gearing up to host a fascinating battle between these two, particularly now that SoftBank has stepped into the ring.