Online retailers use Cyber Monday to extend the first flush of the post-Thanksgiving holiday sales rush, and now analysts are coming out with their first numbers laying out how holiday sales have been progressing so far. The long and short of it: record numbers for e-commerce retail, with holiday shopping across the U.S. and Europe approaching $130 billion, according to figures from Forrester Research.

But the good news for online sales comes as the bigger picture for retail is not so bright. The National Retail Federation is reporting that sales across both only and physical stores for the past four days are actually down 11%, to $50.9 billion from $57.4 billion a year ago.

Based on early numbers from comScore, it looks like online sales got off to a good start in the U.S., with Thanksgiving topping $1 billion and Black Friday passing $1.5 billion, respective growth of 32% and 26% over 2013.

IBM, which tracks sales in real time through its Benchmark tool, has also now published its figures for how U.S. e-commerce sites performed over the weekend between Black Friday and Cyber Monday.

Following on from strong sales on Thanksgiving and Black Friday, IBM found that online sales were up 17% versus the same period a year ago, while mobile continued to be a strong driver of both traffic and buying, accounting for 51.2% of all e-commerce browsing, and 28.9% of sales.

(Recall that on Thanksgiving, IBM found that one-third of sales were completed on mobile devices.)

All of this will contribute to what Forrester is terming a record year, with the U.S. reaching an all-time high of online sales this year of $89 billion, up 13% on 2013 and accounting for 30% of all eCommerce spend in 2014, yet with growth down by several percentage points compared to recent years: 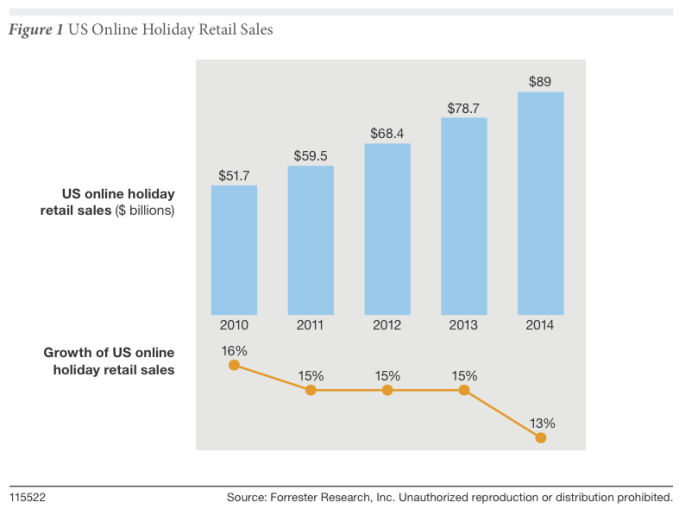 As we pointed out last week, Thanksgiving is becoming an ever stronger period for e-commerce — boosted by physical stores mostly remaining closed and people being cooped up at home for the day. IBM, which doesn’t track actual values, noted that sales were up 14% on Turkey day.

And Forrester’s research appears to underscore those findings. Black Friday sales in the U.S. were actually down by 11% this year. Analyst Sucharita Mulpuru attributed that to the day becoming “eclipsed” Cyber Monday, Thanksgiving, and shipping issues.

“It represents a deceleration in growth due to a shorter holiday selling season” — in other words, less days between Thanksgiving and Christmas than in years past — “and capacity
constraints in the package delivery network,” she writes.

Meanwhile, Europe this year went full-force on Black Friday promotions for the first time (despite the lack of Thanksgiving context…) and it will complement the U.S. figures with sales €35 billion ($44 billion).

(Indeed, when your local London supermarket and stationery shop start offering Black Friday bonanzas, you can see that this has already started to happen.)

Forrester has identified a few other key trends in the U.S.:

— 3.4 million new online buyers. While this sounds great, Forrester’s caveat here is that the number of new buyers is actually shrinking every year, since “most online consumers are already shopping online.”

This is also one of the reasons why those shopping baskets are shrinking a bit in IBM’s estimates: IBM says that in the past weekend, the average order value was $123.81, “flat compared to the same period in 2013.”

What’s going on? The wider pool of users means more cost-conscious shoppers are coming online, and it also means significantly more competition to pick up those buyers, hence lower prices. Overall those online retailers will see $10 billion more in sales from new shoppers in November and December, compared to a year ago.

— More wallet share online. The average online buyer will spend 10% more online in 2014 than he or she did in 2013, partly because of more familiarity with the experience but also because there is just more out there to buy than before.

— Rise of mobile. Following IBM’s strong assessment of the role of mobile in sales, Forrester chimes in with their own numbers to back this up: it says there are currently 213 million consumers who are expected to have smartphones in 2014.

“Shoppers with access to phones on heavy sale dates, like Black Friday for instance, often choose to research and buy on those devices to capture great deals,”Mulpuru writes. She notes that “On key dates in 2013, in particular Thanksgiving and Cyber Monday, 34% and 38% of shoppers, respectively, said that they used mobile devices to shop. In contrast, those figures were just 21% and 23% in 2012.”

It will be worth seeing how much the needle moves on these numbers in 2014.

In the meantime, drilling down into mobile stats a bit more, IBM is reporting a continuation of the same trends that it highlighted on Thanksgiving: iOS remains the stronger plaform when it comes to consumers browsing and buying, and bigger screens appear to lead to more purchases. Desktop PC traffic represented 48.6% of all online traffic, but 71.1% of all online sales, with an average order value of $128.60 versus $112.81 on mobile devices.