It likely hasn’t passed you by that traditional book publishers aren’t having the best of times these days. Indeed, when it comes to reading you could say it is the best of times and the worst of times. (TC’s Jon Evans — also a published author, so in a prime position to comment on the matter — made just that Dickensian point, in fact, in a TC post earlier this year.)

Best for the consumption of the written word, given the proliferation of information online — much of it entirely free to read. Worst for traditional book publishers, with their paper-based, price-tag-carrying medium so disrupted.

Book publishers also have the voracious leviathan Amazon and its war on books to contend with. Sure, Amazon may be a huge seller of paper books but shipping dead tree costs Amazon dollar. Dollar Bezos would rather not spend if he can render the book medium back to its informational essence and fire pixels directly into customers’ eyeballs.

Hence the Kindle e-reader, a word delivery device which generally continues to track down in price (especially if you buy an ad-supported version). And hence Amazon opening the doors on a ‘Netflix for books’ — aka its Kindle Unlimited program — this summer. Pay your sub at the door, Dear Reader, and books are turned into a collective sea of words for you to go free-swimming in.

Amazon also continues to try to woo book writers into its arms via a Kindle Direct Publishing program. Some writers (and publishers) would characterize that as a Siren song, given Amazon’s parallel drive to pulp individual books into a subscription service commodity.

The long and short of it is that traditional publishers are assailed on all sides. Not least because these hoary old institutions, long accustomed to sitting in the comfortable groves of their own routine page turning, are the easiest targets for disruption.

But with Amazon cranking up the pressure, and startups also taking a fresh look at how books could and should be consumed in a mobile-obsessed era — e.g. Oyster and Blloon, to name two that spring to mind — there is more impetus than ever for traditional publishers to up their game. Even if it just means experimenting with fresh types of digital delivery.

This impetus is a good thing. No one who loves reading and books should wish for a monoculture in delivery mechanism, especially not one fully branded by Amazon’s margins-focused upper-cut of a thrusting swoosh. Bezos has shown plenty of muscle in this fight already. And it’s not pretty.

So talking of experiments, this month U.K. publisher Penguin Books — actually now part of a gigantic publishing entity, after merging with Bertelsmann-owned Random House in April to spawn Penguin Random House — has launched a little digital dabbling of its own, using its resurrected Pelican educational imprint as the medium for the experiment.

What exactly is it doing? It’s making Pelican e-books available to read online in the browser, on any device you fancy. So much like Amazon’s Kindle Cloud Reader, but trailing in its wake by three years. And only offered a handful of titles. Still, baby steps. (It’s also worth noting that Kindle Cloud Reader does not appear especially beloved by Amazon, and has a relatively basic feature set — so there’s room for others to design and build a better cloud reader.)

Additional features offered by Pelican’s browser-based educational e-book interface include animated diagrams and maps, footnotes that can be summoned quickly by tapping/mousing over them, and a sharing and highlighting study aid-feature. All thoughtful extras, especially for an educational imprint. 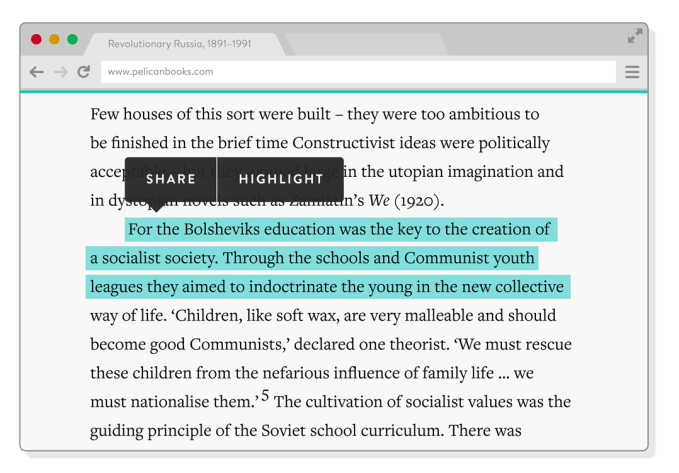 The backstory to the Pelican imprint is that it was discontinued in the 1980s, after years of falling sales, but relaunched this May after 30 or so years away. Which means there’s only a handful of Pelican titles at this point. But also means Pelican’s ‘startup’ status within Penguin Random House allows for more risks to be taken with it. And specifically digital risks, which is exactly what traditional publishers need to be doing.

Still, the initiative appears far more ‘experimental side-project’ than bold new strategy at this point. It was actually dreamt up prior to the Bertelsmann merger — but has evidently not had its wings clipped since the two companies decided to join forces.

The idea apparently came from an internal designer at Penguin, called Matthew Young, rather than out of an executive strategy meeting on combating digital disruption. So it does rather underline that traditional publishers still need to shake a tail feather when it comes to oiling their digital strategies.

“The idea to make these books available to read online didn’t come from a strategic, editorial or marketing position, but was instead born straight out of the Art Department,” Young tells TechCrunch. “I’m a cover designer by profession, and I’m actually a big collector of printed books, but nowadays I do most of my reading on a screen, usually on my phone, on the way to work, whenever I can.

“I love reading ebooks, but as an obsessive, pedantic designer type, I couldn’t help thinking that the actual experience of reading a book on a screen, although good enough, could be so much better. So that’s exactly what I set out to build — the best possible reading experience for these books.

“I knew some basic HTML and CSS, and I’d just learnt how to build responsive websites, so I cobbled together a prototype responsive site showing how the reading experience — the typography, the layout, the white space, hierarchy, etc. — could reflow and adapt to suit different screen sizes. I pitched the idea to my colleagues at Penguin, and they were really supportive and encouraged me to develop it further.”

Currently the Pelican browser e-books experiment involves just five titles. But more will be added next year, according to Young. Titles on offer now include an explainer on economics, one on human evolution, another on the brain, plus a history title on the Russian revolution and a book about Greek and Roman political ideas.

Readers visiting pelicanbooks.com on any device can sample one of the books by reading a chapter for free online. Or they can pay £4.99 to be able to read the entire book in the browser. So it’s kicking off with a freemium model.

Bought books remain accessible via a library section, when the user is signed in. And while the content is device agnostic formatting is not going to be fair on every mobile device. Young says the team “tested all the major devices, browsers and operating systems”, working with a creative design agency called Fiasco Design, who built the back-end and also helped with testing.

“Our aim is to offer the best possible way to read these books no matter what size or resolution your screen is. To get the most out of the site you’ll definitely benefit from using a modern browser,” he adds.

I tested the browser reading experience on multiple devices including an ancient netbook (pictured top right) and it worked okay, albeit with a few formatting niggles. It was happiest on Mac, and fine if a little flighty at points on iPhone. For a laugh I tested it on a BlackBerry PlayBook and found I was unable to log-in. (But won’t hold that against it.)

My main complaint was frequent log-outs. A Penguin U.K. spokeswomen said this is down to the server not being able to cope with demand, crashing and then logging out all accounts. She said Penguin is “aware of this and looking to upgrade soon”.

Does Penguin have plans to expand this browser e-books interface to more books in its catalogue, outside the Pelican imprint? Scale is arguably what’s needed to combat Amazon’s reach. Although you could also argue that a death by a thousand cuts strategy might also be fruitful in drawing eyeballs elsewhere. If enough publishers start putting e-books online and making interesting, creative content reachable and easily accessible on any device, circumventing format lock-ins and making whatever Amazon is offering a bit less compelling. (Albeit price point remains a barrier — and one that Amazon continues to push at.)

Either way, the Pelican project remains focused on its rehatched baby digital imprint for now, owing to a target youth audience. So while this small project may be interesting and welcome it’s not going to keep Bezos awake at night. It probably won’t even prick his filter bubble.

“We think the ‘reading in the browser’ model is something that fits particularly well with the new Pelican brand, as we’re aiming to reach a young, digitally-focused audience,” says the Penguin spokeswoman. “It’s still early days, so I can’t give you a clear answer about future plans around [expanding it to] Penguin Books.”

The Pelican Books site was launched earlier this month, on November 5, and Penguin isn’t releasing any sales figures. But since launch it says the average reading time on the site has been 18 minutes — which Young dubs “a really long time in internetland”. Logged in users average almost double that, he adds: “So it’s encouraging to see that people really are reading these books and engaging with them.”

Is this the future for all books? Of course not, says this traditional publisher of print. But it’s likely going to be part of the mix. “There will absolutely always be a place for printed books. The important thing is that these books are easy, enjoyable and comfortable to read, however you’re reading them — in print or on a screen. Each format makes the most of its inherent qualities — the paperbacks get lovely paper, Pantone inks and debossed covers — all things you can’t do online — and the online books offer full-colour images / maps, animation, dynamic footnotes, etc. — all things you can’t do in print,” says Young.

“It’s an experiment because Penguin have never tried anything like this before, and we don’t know how readers will respond to it. I think it’s a great way to read, and hopefully other people will too.”