Black Friday is traditionally thought of as the first day of holiday shopping in the U.S., but with more buying options (and promotions) becoming available online, many are now starting their shopping a day earlier, on Thanksgiving. As a bellwether for how e-commerce companies will fare in the busiest buying period of the year, yesterday was a mixed (shopping) bag.

Overall sales were up by 14% compared to Thanksgiving 2013. But the average order value was actually down. According to figures from IBM, it was $125.25, versus $132 a year ago.

IBM adds that the very biggest physical retailers — department stores — saw online sales grow by 29.8% over last year, but their average order value of $139.53 was down by 2.45% compared to last year.

What this indicates is that more people may be shopping online than in years before. But — either because of the bigger impact of the economy; or because purchasing values often decline as we expand out from earlier adopters into later adopters; or a bit of both — on average merchants will be seeing lower value transactions.

IBM collects the numbers via its real-time Digital Analytics Benchmark, which tracks approximately 800 U.S. retail websites. The Benchmark is part of IBM’s work with 8,000 global brands and across 35,000 client commerce engagements. It does not provide an overall estimate for how much merchandise was sold.

What it does provide, however, are statistics outlining how people are shopping. IBM found that mobile, led by iOS, continues to rise in prominence in the e-commerce universe. Mobile devices now account for over half of all site traffic, up 10 percentage points on 2013; and now one-third (32.33%) of all sales are being completed on mobile devices, up seven percentage points. 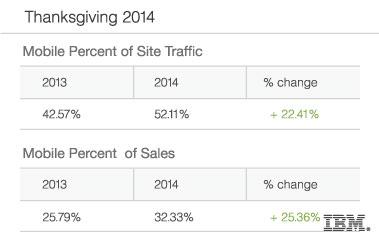 As in years before, IBM says that Apple’s iOS-based iPhone and iPad yielded way more activity than Android devices, although the margins continue to narrow in some areas.

Yesterday, the average order value on iOS devices was $118.57, only $23 more than on Android devices. But iOS led the way in bringing more site traffic at 36% versus 16%, and in what may be the real killer stat, iOS devices alone accounted for over one-quarter of all sales, with Android at 7%.

These are stats that could help Apple in its case when it woos retailers to Apple Pay — and underscore why Apple has been pushing this new point of sale service. In effect, people are already using iOS devices to transact, so adding a mobile wallet to use in physical situations is a no-brainer.

As we have noted before, this is not too much of a surprise when you consider that iOS devices have been well ahead of Android for a while now, when it comes to consumers using their smartphones as computers. It’s not that Apple devices are less data efficient; it’s that, for now, Apple device owners are more likely to use their devices more.

When looking at how tablets and smartphones are faring in the mobile segment, the bigger screen of the tablet continues to be a pull for more dollars spent. This year an average of $122 was spent when people bought items on tablets, versus $105 for smartphones. Notably, the gulf seems to be widening: last year there was only a difference of $10 (in favor of tablets) between average order values. Tablets accounted for just under 18% of sales, versus smartphones at just over 14%.

Consistent with last year, where smartphones continue to shine is in user traffic, with nearly 37% of all site traffic coming from smaller mobile devices, and only 15% coming from tablets. I remain convinced that this is because it’s actually a bit antisocial to start shopping while having a family event like Thanksgiving. Smartphones are more discreet.

But this is not to say that the Desktop Is Dying. Far from it. Overall, it’s still accounting for the other half of all sales.

Another interesting stat tracked by IBM is the role of social media. Unfortunately, today the firm seems only to confine its analysis to two social sites, Facebook and Pinterest, and leaves out Twitter, Google+, Instagram and other possibles. But looking at the performance of just those two, IBM says that Facebook continues to be the bigger referral engine, driving “an average of $107.73 per order, while Pinterest referrals averaged $95.24 per order.”

It seems that, while Pinterest is much more of a visual-based experience, it’s not a strong enough match when put up against those relentless Facebook algorithms.

We’ll update you today on how Black Friday sales are doing online, and will hopefully also be including stats from others, too.