MOCAheart wants to make keeping track of your cardiovascular health as easy as pressing a button.

The device, which is currently on Kickstarter, was developed by a team led by Naama Stauber and Dr. Daniel Hong, who was a physician at National Taiwan University Hospital, one of the country’s top teaching hospitals, before becoming an entrepreneur. The two met while attending the Design for Service Innovation Program at the Stanford Graduate School of Business, which focuses on developing new software and hardware for healthcare.

To use MOCAheart, you place your index fingers on top of the device and wait a few seconds for your health data to show up on the connected app. 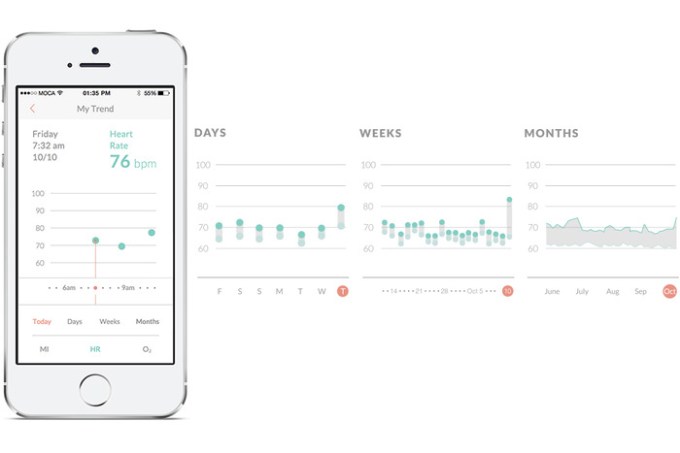 The lightweight but sturdy MOCAheart, which I saw demoed at MOCA’s Taipei office, contains several sensors within its stainless steel and plastic case. Two are light sensors: one red light and one infrared sensor that measure blood oxygen and blood velocity, respectively. Two EKG sensors track cardiac electronic activity. It also has a G-sensor, or accelerometer, so the MOCAheart can be used as an activity tracker in the future. The app uses pulse transit time (PTT) to estimate the user’s blood pressure.

Instead of telling you your systolic and diastolic pressure measurements, like a blood pressure monitor does, MOCAheart uses a rating scale it calls the MOCA Index, which ranks your heart health (based on blood pressure, blood oxygen, and blood velocity) from 0 to 4. If you score a 0 to 1, that means your blood pressure is probably in the low to ideal range. Two means it is still normal but elevated, while 3 and 4 signify that it may be high enough to warrant a trip to the doctor.

The app also lets you note the time, location, and weather conditions for each reading. The latter is important because very cold weather or high temperatures can put people who have heart disease at risk for heart failure.

Hong says that the MOCAheart app uses its own index instead of giving people their blood pressure measurements because the device currently isn’t FDA-approved as a blood pressure monitor (though the startup might apply in the future). This is a potential drawback for people who need exact measurements, but on the other hand, if you just want an overview of your heart’s vital signs, the MOCA Index is easy to use and understand. The app does give you more precise measurements about your pulse and blood oxygen levels, and can be accessed by caregivers or family members.

The MOCAheart is targeted toward people, including the elderly, who need to keep track of their heart’s health, but can’t remember (or be bothered) to strap themselves into a blood pressure cuff everyday. MOCAheart can be slipped into a keychain holder or clicked into a specially designed smartphone case. Other cuffless blood pressure monitors out there include Viatom’s Checkme and Sotera Wireless’s ViSi Mobile monitor. MOCAheart wants to differentiate with the device’s sleek design and its app, which gives family members a quick way to monitor their love one’s health.

The device was developed partly with people like Hong’s parents in mind.

“When I was in the U.S., I’d call my parents and ask about their health. They kept insisting they were okay, even though my father actually had high blood pressure. Then he had a stroke. As a doctor, I felt I should have known earlier,” says Hong. “I wanted to create something that would make it easy for people to share track health data and share it with their families, so they can be alerted earlier if something needs to be checked out.”

MOCAheart has reached about a third of its $100,000 goal, which it needs to hit by Dec. 25. The device starts at $119 and is estimated to ship in April, a delivery date Hong is confident MOCA will be able to hit because they already have a final working prototype and manufacturers lined up in Taiwan. For more information about MOCAheart, visit its Kickstarter page.