With 1.35 billion active monthly users, Facebook continues to be the world’s largest social network by some margin, but  when it comes to picking up new users, it appears to have reached a saturation point. Research out today from the Global Web Index notes that Tumblr’s active user base in the last six months grew by 120%, while Facebook’s grew by only 2%.

And in overall member growth, Pinterest took the lead with 57% growth while Facebook’s member base grew by 6%.

In mobile apps specifically, while Facebook is the largest app today, Snapchat — with an emphasis on teen and 20-something users — is the fastest growing of them all, up 56% this year. It is however followed closely by Facebook Messenger and Instagram — a sign of not just how Facebook’s mobile apps continue to represent the company’s growth drivers, but also how its push to drive more users to the standalone app by cutting out Messaging from the main app has helped it grow. 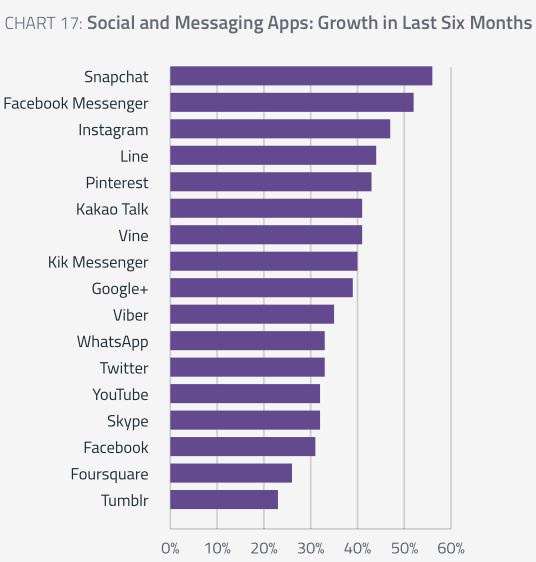 One takeaway from this is that while Facebook is ahead of the rest of the pack by a big margin, there is a lot of flux among the rest of the field of social platforms. Indeed, when GWI released numbers earlier this year, Instagram topped the list for fastest-growing social network. It’s now dropped down to number three, both in terms of overall members and active users.

Another is that Facebook may well be looking to pick up yet more of these smaller apps — or develop more of them in-house — to keep fuelling its growth regardless of the slowdown trend in its core app.

“Facebook has some major challenges to face,” Jason Mander, head of trends and author of the report, writes. “Firstly, people are growing tired of it, with 50% of members in the UK and US saying that they’re using it less frequently than they used to (rising to 64% among teens).” He says that the stats appear to show people using Facebook much more passively today than in the past: “Since the start of 2013, we’ve seen behaviors like sharing photos and messaging friends fall by around 20 percentage points.”

Still, you cannot deny the size and strength of the world’s largest social network. To put Facebook’s dominant position into some context, the ITU yesterday announced that there are now 3 billion people online worldwide. Facebook’s active user base of 1.36 billion means that over one-third of the world’s population is now on Facebook.

GWI — which bases its data on interviews with 170,000 users across 32 markets — provides some of its own stats to demonstrate just how big it is. It notes that outside of China, 4 in 5 internet users have a Facebook account, with the proportion even higher in some markets like Latin America, where a whopping 93% of respondents reporting having an account.

Among those with Facebook accounts, 1 in 2 say they are actively using Facebook each month, “giving it about twice as many active users as the three sites which compete for second position: Twitter, YouTube and Google+.”

(Yes, you can argue that a Google+ “user” may possibly never actually engage on the platform but simply sign in with it on other Google properties. Indeed, GWI notes that when it comes to visitation rates, Google’s YouTube ranks at number one, with 85% of online adults visiting it each month, nearly ten points ahead of Facebook.)

I’m embedding the full, 45-page report below, but here are some other interesting stats that caught my eye:

Mobile. As we are seeing played out at companies like Facebook and Twitter, who both now make more from mobile ads than from desktop ads, mobile devices are really leading the charge for social networking services. But overall they are not outweighing usage on PCs and laptops just yet. Although usage on the bigger screens is “contracting”, in the words of the report, 6 out of 10 users are still accessing social networks via a PC/laptop, while 4 in 10 are using mobiles. The younger the consumer gets, the more prevalent mobile becomes. In the 16-34 age group, mobile is the social platform of choice for more than 50% of users.

Daily use versus growth. While Tumblr and Pinterest appear to have seen the most growth, they are not seeing as much use when it comes to frequency, where the numbers almost appear to invert. 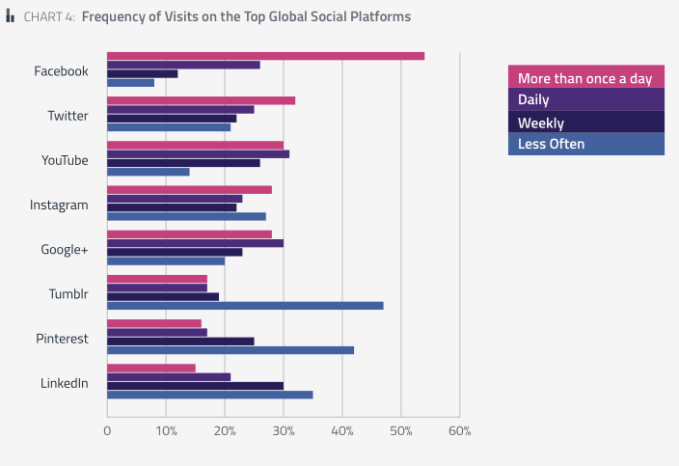 China continues to be dominated by home-grown social networks. Google+ is the top network when ranking those from outside the country with Facebook in second position. 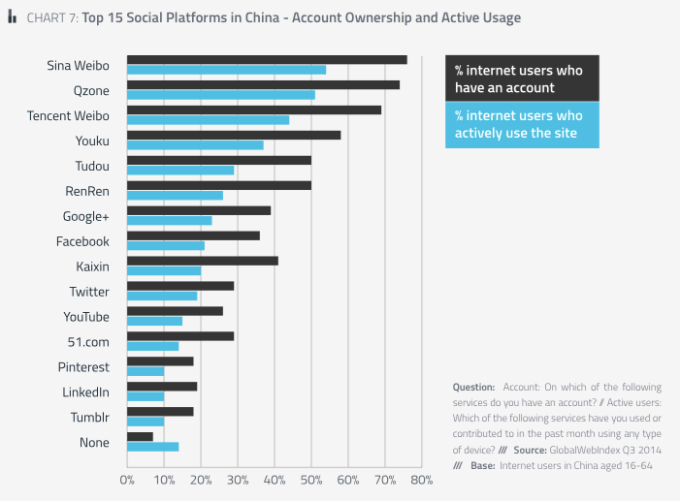