Beyond telling the news through Dow Jones, The Wall Street Journal and other news companies, U.S. media giant News Corp also makes news with strategic investments. Today the company announced its first deal in India: it has paid $30 million for a 25 percent stake in Elara, the startup that runs real estate portal PropTiger.com.

PropTiger.com, which has sold more than $1 billion in property through its platform to date and also offers real estate advice, is not News Corp’s first foray into this segment. The media firm owns Move, which operates Realtor.com in the U.S., and it also has a 62 percent share of REA, which operates Realestate.com.au in Australia.

This investment in PropTiger.com will allow the Indian company to draw on News Corp’s “digital and product expertise” and experience with the other two sites, the media giant said.

“India has more than 270 million Internet users and the number is growing exponentially. There is no doubt that the development of digital is empowering individuals and transforming industries, and we are extremely enthusiastic about the potential for PropTiger.com as the country fulfills its digital destiny,” Robert Thomson, Chief Executive of News Corp, said in a statement. 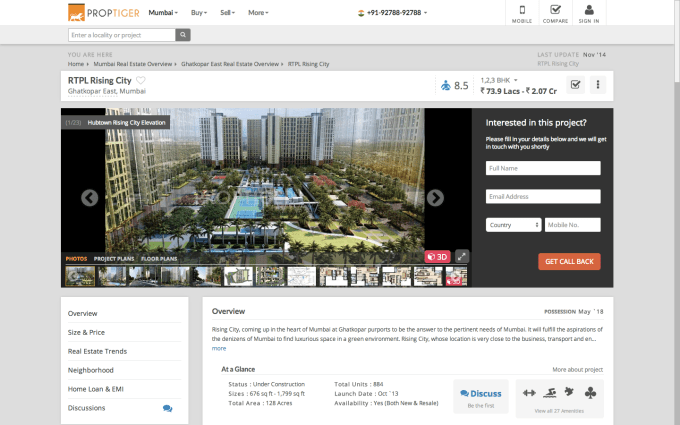 Elara launched PropTiger.com in 2011, initially on the premise of helping middle class Indians buy their first homes. Today it includes listings from 12 cities across India and has helped sell over 10,000 properties in the country.

The startup took in a $5 million round led by SAIF Partners and Accel Partners in 2012 having raised an initial $2 million from SoftBank, Horizen Ventures and a range of angel investors in 2011. There had been rumors that it was raising fresh funding, but that speculation pegged the round at $20 million with participation from existing investors.