Flipboard has spent the last several years tying to convince publishers the value of having their content show up in its apps. Today the Wall Street Journal, one of the last major holdouts in the U.S., will allow Flipboard users to view its news stories there.

For Flipboard, the addition of WSJ articles is a huge win, one which shows its ability to work with publishers to define the user experience for its readers. It also shows an increased willingness among major publications to make their content available through third-party applications.

That’s because the Wall Street Journal historically has been very protective of its content, putting most stories behind a paywall readers can only access if they are subscribers. But the company is opening up just a little — you can see that in the partnership with Flipboard, for instance, or another partnership with Evernote that allows articles to be saved into the note-taking an bookmarking app.

The Wall Street Journal follows the Financial Times and the New York Times — two publications that also have digital paywalls — onto the app. According to Josh Quittner, who runs the app maker’s publisher partnership team, more content owners are working with Flipboard because the company has created better tools for them to work with.

Flipboard, of course, has done a lot of work to create the look and feel of a digital magazine. One of the reasons the WSJ might have been willing to put its content on the app is just how much its feed of stories look like they came straight out of the paper. That includes its famous stipple drawings and distinctive layout of text and columns. On the monetization side, the WSJ is also selling its own ads for Flipboard, which Quittner said would be fully sold out at launch. 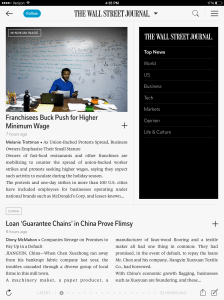 In an email, Dow Jones head of product Edward Roussel said the deal was about “expanding our distribution to platforms that our readers love. So this deal is good for our subscribers. It’s also allowing us to experiment with new advertising models. We are delighted to have two launch advertisers to help premiere this effort.”

Even so, the WSJ-Flipboard integration still keeps much of its content closed off to readers unless they are subscribers. Regular Flipboard readers will have access to the same free articles that are available on WSJ.com.

Those who subscribe to the WSJ will be able to authenticate with the paper in the same way they login social media accounts like Facebook or Twitter in their accounts page. Once that’s done, they’ll be able to see a full range of content from the paper.

And that’s kind of the point. Flipboard will serve as an incremental ad revenue stream for users who don’t come to the website and would rather view stories in app. But it’s also a lead-gen vehicle for the WSJ to attract new subscribers who want access to its content.

With the WSJ under its belt, Flipboard could potentially sign up other publishers that keep the majority of their content behind a paywall or have their own apps. Weekly magazine publishers, which have been working to improve their own authentication efforts, could be next. For now, however, the app has most of the major news publishers that matter — at least in the US.