Add real estate to the industries that have captured the attention of venture investors in Brazil.

Real estate marketplace VivaReal recently raised a $41.3 million Series C with Spark Capital and Lead Edge Capital. The raise is one of the largest venture capital investments in Brazil this year, behind retailer NetShoes’ $170 million round and travel giant HotelUrbano’s $50 million Series D earlier this year, and brings VivaReal’s total venture financing to over $70 million.

We wanted to cash up so we could go head to head.

VivaReal is the largest real estate marketplace in Brazil, with over 2.5 million active listings in over 1,000 cities, and over 3 million unique visitors per month, 98% of whom are in Brazil. It recently passed market leader ZAP Imoveis, owned by Globo, the media holding company that runs a virtual monopoly across print, TV and radio platforms in Brazil.

“They’re just a beast,” says VivaReal co-founder and CEO Brian Requarth. “We wanted to cash up so we could go head to head. We are actually the market leader in traffic, we have more inventory and our geographic coverage is greater. We don’t know their revenue figures — they started so much earlier and probably have more. But what typically happens in these markets is revenue follows traffic.”

Long before they were rolling in venture capital, co-founders Requarth and Thomas Floracks  were living in Bogota, Colombia. Requarth was teaching English to make ends meet, and Floracks, a German, was backpacking around Latin America.

“I met Thomas at the Departamento de Seguridad – we were both paying a fine for overstaying our visas,” Requarth recalls. “We started talking and realized we were both into technology, and started doing anything we could. The first website we built was for a tree farm in Sebastopol, Frosty Mountain Tree Farm, where I used to work as Santa Claus when I was a kid.”

Then they started building the real estate broker websites. “We built up a nice clientele,” Requarth says, “and then the real estate crisis happened in 2008. We took a big hit and we realized it wasn’t going to be a big business.”

They started looking at digital marketplaces in Latin America, and decided to place their bets with a residential real estate marketplace in three countries at once: Mexico, Colombia and Brazil. On his way to spend New Year’s in Rio de Janeiro, Requarth got a random email from a Brazilian friend he’d studied abroad with in Argentina, Diego Simon. He told him about his plans, hired him to conduct market research in Brazil, and a few months later, brought him on as VivaReal’s third co-founder. “No contract,” Requarth adds. “Just a handshake.”

“Diego flew to Colombia and the three of us penciled out what we thought we needed to be successful as a company,” Requarth says. “From ten things we chose the top three and said this is all we’re going to do: grow our listings, grow traffic and sign up customers.”

Their first challenge was getting real estate brokerages to put their listings on VivaReal.com, so they started cold-calling. “They were like, ‘Why should we list on your site? You don’t even have properties or traffic.’” 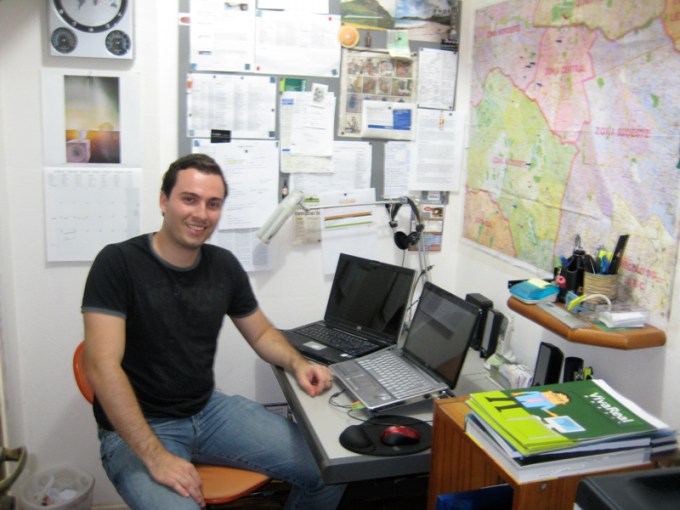 So we developed a bot and started scraping listings instead. I remember we hired our first intern, we had bought a Skype number in São Paulo and forwarded it to our office in Bogota, and his first day was answering the phone. He got bombarded by calls like, ‘I’m going to process you, you didn’t ask for permission,’ total crisis management. He told them we were going to start generating contacts for them, and we were able to convert  those early angry companies into our first customers.”

By the end of 2009 they had enough traction to start charging brokerages to list. Unlike Trulia and Zillow, which offer free listings for real estate brokerages but charge for premium placement, VivaReal charges brokerages and independent agents a flat fee to place all their listings on the site.

“In almost all countries people charge for listings,” Requarth explains. “The US is unique in the sense that it’s free to list, mainly because there’s an MLS. So in the US listings are kind of a commodity, whereas most places in the world, it’s highly fragmented. And the reason why is that, in most countries, there is no exclusivity of listings.”

Brazil only has sell-side agents, and with no exclusivity, they don’t share information, Requarth says. “It creates a very fragmented marketplace. That means we play a really important role for the home buyer, because we have the largest database,” he said.

It’s a market scenario that creates a barrier to entry for competition, because the process of obtaining listings is more laborious than in the US. There’s a second barrier at play as well that would prohibit a Zillow, for example, from easily entering the Brazilian market. “The US has data standards, so it’s easy to pull a data feed of listings,” Requarth explains. But in Brazil, there are over 50,000 real estate offices using over 100 different providers for their website or CRM. “So we spent a lot of energy in 2011 adapting to every data format, and it’s one of the reasons our growth started to accelerate.”

There are more real estate brokerages in the state of Rio de Janeiro than all of Colombia, and about 200,000 agents across Brazil. And while Mexico is a big market, the real estate advertising spend last year in Brazil was R$4 billion ($1.5-2 billion dollars).

At the same time, VivaReal pulled out of Colombia and Mexico, moved their headquarters to São Paulo, “and decided to go AAB – All About Brazil.” Requarth says they wanted to focus, and had underestimated the complexity of executing in multiple markets at once. Then there was the question of market size. “There are more real estate brokerages in the state of Rio de Janeiro than all of Colombia, and about 200,000 agents across Brazil. And while Mexico is a big market, the real estate advertising spend last year in Brazil was R$4 billion ($1.5-2 billion dollars) according to IBOPE.  Historically only about 10% of the ad spend goes to the internet, but the market has slowed down a bit. That’s great for us, because they’re accelerating their online spend. When business is booming they don’t really analyze their ROI, but now it’s shifting dramatically online.”

By then the founders had been bootstrapping VivaReal for three years, and decided it was time to raise capital. “We did it with our own cash – friends, family and fools. I actually sold my apartment in Colombia and put all the money into the business,” Requarth recalls.

Simon Baker, former CEO of publicly traded real estate giant REA Group in Australia, led the first angel round. “He had been trying to get him on board for a really long time, and finally hired him as a consultant, but we didn’t know how we were going to pay for his trip,” says Requarth. “So with five days notice, we organized an event where we invited 100 companies in São Paulo to hear him speak about real estate technology. We broke even on the event, covered his consulting fee and airfare, and got a bunch of new clients. He was like, ‘Holy shit, these guys are scrappy,’ and wrote a check for $100,000.” With the participation of friends and family, they closed their first round, about $500,000.

This was not Requarth’s first go at scrappy entrepreneurism. When I met him in 2003, he and James Gray were undergrads at San Diego State. Requarth recalls that they hated the linoleum dorm room floors, and decided to started a business called The Carpet Guys.

“I had the idea to go over to Sid’s Carpet Barn and negotiate on consignment a ton of carpet remnants,” Requarth says. “We loaded up on a ridiculous amount of carpet and then we parked in front of the dorm rooms. As soon as students started arriving we blitzed them with our Carpet Pitch. Parents were sending their kids of for the first time and all they wanted was their kids to have the best… I don’t remember how much we sold, but it was a lot.”

Six years later, Gray was one of VivaReal’s first investors, and Requarth is also an investor in his business, Giving Assistant.

Six months later Viva Real closed their first institutional round, a $3.7 million Series A co-led by Kaszek Ventures and Monashees, and Kaszek’s Nicolas Szekasy joined the board as an observer.  (Greg Waldorf, Eric Asher from Monashees, and Requarth currently occupy the board).

Then came a $14 million Series B led by hedge fund Valiant, and a $8.9 million B2 led by Dragoneer.  The $41.3 million Series C led by Spark Capital and Lead Edge Capital pushes VivaReal’s total financing to over $70 million dollars.

Requarth says the new round will finance product development, and marketing, recruitment efforts, and potential acquisitions.

VivaReal currently has some 12,000 real estate companies – about 25% of Brazil’s 50,000 or so brokerages – paying monthly subscriptions powering over 2.5 million listings. It is currently their only source of revenue.  A source close to the company says that revenue is in the tens of millions for 2014 and tripled year over year. Traffic has doubled in the last year, and so has mobile traffic, jumping from 14% to 28% of total traffic to VivaReal. Requarth says mobile is critical, and that some of the upcoming product launches will be mobile first.

It’s one hell of an impressive trajectory for a Brazilian startup launched by two foreigners, and bootstrapped for its first three years. “Brazil is not for beginners,” in the words of the composer Antonio Carlos Jobim, and the tech market is notoriously difficult for outsiders to break into, in no small part due to Kafka-esque bureaucracy and crushing payroll taxes. “A lot of people doubted the fact that I was an American, and said we weren’t going to be able to do it,” Requarth says. “But having a Brazilian co-founder – Diego gets a ton of credit.” 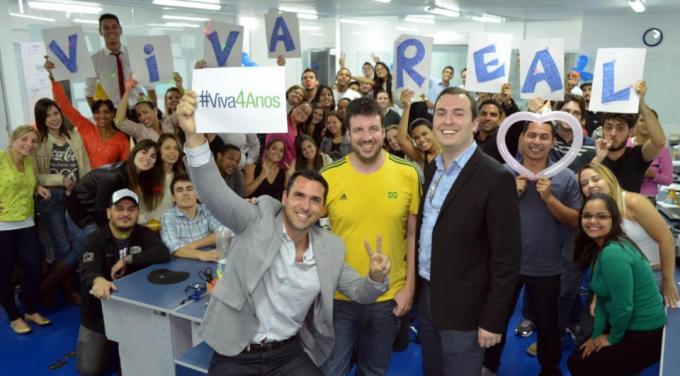