Ebay Now, the same-day local delivery service from the online marketplace giant, was pulled from the App Store over the weekend, where previously it allowed mobile customers to shop from their phones in order to receive items from nearby retailers later that day for an additional $5 fee. The changes come about as eBay is rethinking how it wants to handle the high costs associated with running same-day delivery services.

According to an eBay spokesperson, the eBay Now service is “moving to core.” That is, the service will no longer exist as a standalone application but will instead be folded into eBay’s main mobile app and website.

The delivery service, which originally launched in San Francisco in 2012, later expanded into San Jose, the Bay Area Peninsula, Manhattan, then Brooklyn and Queens, and finally Dallas and Chicago. Its further plans to expand to 25 markets by the end of 2014, however, did not come about.

The company also acquired a U.K.-based same-day delivery startup called Shutl in October 2013, and by spring 2014, Shutl was put in charge of delivery instead of eBay operating its own fleet of drivers.

A number of big-name retailers had signed up to participate in eBay Now, including The Home Depot, Target, Macy’s, GNC, Walgreens, Best Buy, Toys R Us, Office Depot, Urban Outfitters, RadioShack and AutoZone, to name several. Though many of eBay Now’s biggest retailers also operate their own e-commerce sites, they’ve also felt the impacts of the shift to e-commerce and, specifically, the threat of Amazon which has been rolling out same-day delivery to select urban markets across the U.S., as well. 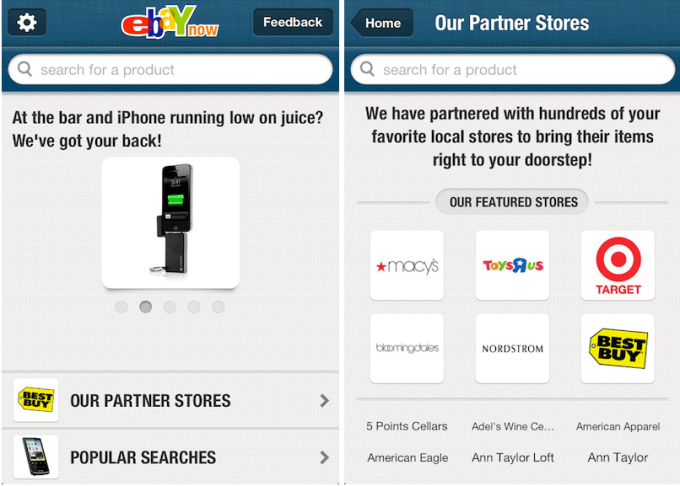 Ebay Now has not been entirely shuttered, though it’s unclear how long that will remain the case. The online site for the service is up-and-running today, allowing customers in the supported markets to continue to shop for items and receive them in as little as two hours.

But eBay’s larger focus going forward is not on same-day delivery expansions, but rather on expanding more logistics options to smaller merchants, a report from Reuters stated (and eBay specifically pointed to when asked about its strategy).

Specifically, the company is working to allow its smaller sellers with annual sales under $100,000 to allow shoppers to pick up items bought online in local stores. This “click-and-collect” model is also used by Shutl, which allows eBay shoppers to pick up purchases from British retailer Argos. Ebay is today looking to offer that delivery option, commonly used by most large retailers themselves, across the U.S, Germany and other markets

Recode also recently spoke to eBay about its plans with eBay Now, and whether or not the service was being shut down. EBay CEO John Donahoe responded that most shoppers want same-day delivery for groceries, which is “not really the sweet spot for eBay,” he said, adding that buying online and picking up in store for free is what the eBay shopper wants – not paying extra for the delivery.