The Fire TV Stick works. That’s about all there is to it. It streams videos from Amazon, Netflix and more. It plays simple games and streams from local network shares. But it’s not for everyone. There are better products on the market for some users. That said, the Fire TV Stick is well worth its $40 price tag.

Pros
The price is right at $40
Access to Amazon Instant Video, Netflix, Hulu Plus and others
A clean and logical interface

Cons
Slightly laggy interface
Voice search is not available through the remote, only the app (which is out for Android, iOS is coming soon) 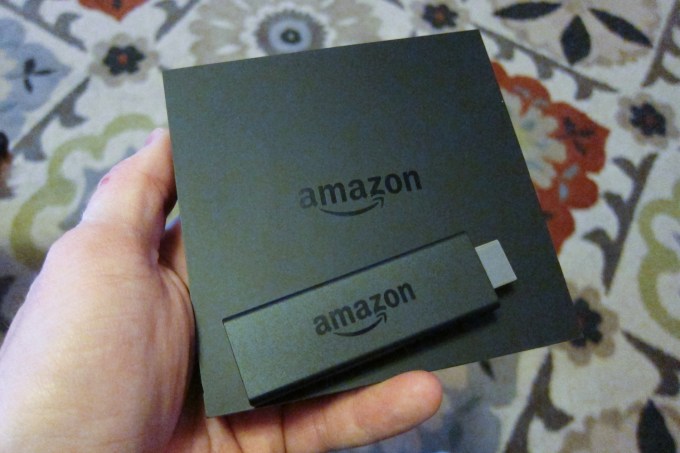 The Fire TV Stick is the little brother to the Fire TV. Where the latter is a full-fledged streaming device complete with optical output and a quad-core CPU, the Fire TV Stick takes a decidedly more casual approach. As the name suggests, it’s just a stick like Google’s Chromecast or the Roku Streaming Stick. It plugs into an HDMI port and is powered by microUSB.

The device works as advertised. There’s not much to say besides that. Plug it into an HDMI port and it powers up. After sitting through a 5 minute video explaining the ins-and-outs of the system, the Fire TV Stick is ready to go. Click a movie or TV show and it starts streaming. Select an app and it works.

Sadly, it doesn’t work as well as the big brother, though. There’s a bit of lag and hesitation while navigating items on the Fire TV stick. The navigation is smooth enough, but not silky smooth like on the full fledged Fire TV. The lack of the quad-core CPU will be noticeable to users of the Fire TV. The Stick also lacks the Ethernet port, optical output and the ability to search by voice from the remote (although Amazon will happily sell Stick owners the voice remote).

The Fire TV Stick shares an operating system and user interface with the Fire TV. It’s logical and easy to jump right in — if you’re an Amazon Prime subscriber. The Fire TVs are foremost a way to watch content from Amazon Instant Video. All the content displayed throughout the main menu is from Amazon. The search function only returns results from Amazon as well. If you want to watch or search within Netflix, the app has to be running.

Only having access to Amazon Instant Video from the homescreen isn’t a big deal, really. The library is comparable to Netflix and now has HBO’s back catalog. And Netflix and others are just a click away. 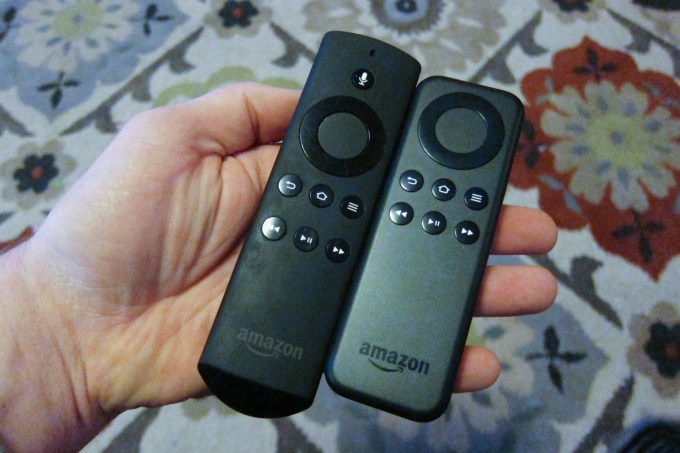 Amazon packaged a basic remote with the Fire TV Stick (right). It sports the necessities such as navigation and media playback buttons. A dedicated voice search button is absent, but will be available on the upcoming Fire TV companion app. During my testing, I found the lack of the voice search startling. Having used a Fire TV since its release, I never knew how much I leaned on that function. It’s still possible to search on the Fire TV Stick, but only with a clunky on-screen keyboard.

The Fire TV Stick is directly competing with the Roku Streaming Stick and Google’s Chromecast. But they’re for different people. Chromecast is great for the mobile aficionado — someone who lives on their mobile device. It’s not ideal for a multi-person environment with children where a dedicated remote and an interface on a TV is just easier to navigate.

The Roku Streaming Stick stick is a great alternative to the Fire TV Stick. It offers more streaming stations than Amazon’s device. If a person just has Netflix or Hulu Plus, the Roku is the best bet. But if a person also has Amazon, the Fire TV Stick simply has a better interface for viewing Amazon’s selection and the rest of the apps are available like on a Roku device.

At $40 the Fire TV Stick is a great buy for an Amazon household. The library selection rivals Netlfix. It’s true, the $100 Fire TV is a better device, but for $60 less, a person gains access to the same content and experience. And I can deal with a touch of lag if I’m saving $60.