The rise of mobile and streaming video technology has given audiences several new ways to consume content, including binge-watching Netflix series or looking for additional information about a movie on their smartphone while it plays on a tablet. Most shows, however, still rely on the same narrative devices as those produced for traditional television, even ones made for online platforms, like “House of Cards” or “Orange Is The New Black.” Hooked Digital Media, a studio based in Santa Monica, California, wants to change that by creating films especially for watching on mobile devices.

TechCrunch profiled its first release, the app-only horror series “Haunting Melissa,” last year. Now the studio has come out with a sequel, called “Dark Hearts: The Secret of Haunting Melissa,” which is available for download on iOS.

Both series were directed and produced by Neal Edelstein. Before co-founding Hooked Digital Media, Edelstein was a Hollywood film producer, where his credits included hits “The Ring” and “Mulholland Drive.” “Dark Hearts” was written by Andrew Klavan, whose books include bestsellers “True Crime” and “Don’t Say A Word,” both of which have been adapted into movies.

Experimenting With Technology And Plotlines

Hooked Digital Media’s productions are noteworthy because they not only represent a new distribution channel for independent film studios, but also experiment with technology to create new storytelling and narrative techniques.

“Haunting Melissa” and “Dark Hearts” were both created using Hooked Digital Media’s proprietary, which includes a patented technology it calls “dynamic story elements” that makes changes in an episode if you view it again. That means that every time you rewatch an episode of “Haunting Melissa” or “Dark Hearts,” you see and hear new details that add layers to the series’ narrative and atmosphere.

“Dark Hearts” also uses Apple’s SceneKit technology to drop clips at random into the app’s window. Viewer analytics from “Haunting Melissa,” such as which episodes or scenes got the most views or replays, helped shape the new series’ story, structure, and chapter release schedule.

“Haunting Melissa” is about a young woman who believes her dead mother’s ghost is following her after seeing apparitions and hearing strange noises in her home. Though the new series revolves around Melissa again, Edelstein says viewers don’t have to watch “Haunting Melissa” to understand the plot of “Dark Hearts,” which introduces several new characters.

“Andrew Klavan wrote a great script full of the horror you would expect but also strong characters with a touch of fantasy,” Edelstein says. “We wanted to expand the world into these other areas to build out the franchise potential.” 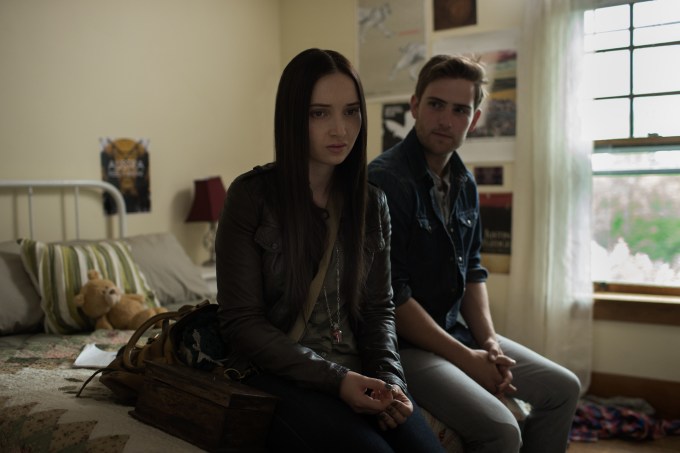 One of the most interesting things about “Haunting Melissa” and “Dark Hearts” is that they challenge the binge-watching trend that Netflix and other streaming video platforms have encouraged by releasing entire series at once. Viewers should turn on the apps’ push notifications because episodes come out at frequent but random intervals.

So far, Hooked Digital Media’s experiments with story elements and episode release schedules has done well. Edelstein declined to disclose specific metrics for “Haunting Melissa,” but says it viewership numbers were good enough for Hooked Digital Media to produce the sequel “as fast as possible.”

“We are continuing with our unpredictable schedule, we’ve proven that it works and our users love it. The binge approach is great but it’s not the only way,” says Edelstein. “We utilize the app and the technology around it to shape a schedule, control the experience from the interface into the content. We know from our icon to the last frame of footage we need to shape the tone and the story, that’s what makes this a unique approach and experience. Our goal is to create a never-ending open channel inside the app so we can actually shatter the binge model and the TV model.”

Mobile Devices As A Window Into Another World

The response to “Haunting Melissa” also reassured its production team that “audiences can emotionally engage in a story that’s exclusively on their mobile devices,” says Edelstein. He believes mobile devices and horror stories make a good fit because they create an intimate and somewhat claustrophobic feeling, like kids reading ghost stories under their blankets with a flashlight (though Hooked Digital Media also plans to release stories in other genres next year).

“Haunting Melissa” recreates the look of found footage, similar to “The Blair Witch Project,” while “Dark Hearts” takes a more cinematic approach. Its plot starts a month after the end of “Haunting Melissa.” New characters include two teenagers who are plagued by strange video transmissions and creepy occurrences incidences in their otherwise normal suburban neighborhood.

“Using an app as a story window is inherently unique from any other platform, we shape the tone from seeing and touching the icon through the experience and we continue to improve upon that experience because of the speed and malleability of the software,” says Edelstein. “It really gives us incredible flexibility to make the whole experience better on a daily basis. From the movie-making aspect this is huge, we can fix or change a story in real-time. In a sense this is mortifying as a producer, but as a director I love it.”