Another day, another Uber mess. The latest news is that Uber is investigating one of its general managers for privacy violations after he accessed customer data from a company-wide platform.

This is the latest setback in a challenging week for the company, coming just after executive Emil Michael was called out for suggesting that the transportation firm might dig up dirt on critical journalists.

The latest Uberite in hot water is Josh Mohrer, the general manager of Uber New York, who BuzzFeed reports is under investigation for accessing customer logs belonging to one of its writers on at least two occasions. Mohrer is said to have pulled the information from ‘God View’, an Uber tool that provides an overview of customers riding its transportation network in real-time, as well as access to their account history.

We twice contacted Uber to ask how it intends to conduct the investigation into Mohrer’s conduct, but we haven’t heard back at the time of writing.

[We have since confirmed with sources that Uber is investigating these specific incidents, however.]

With great data comes great responsibility, so the phrase should go, but God View is far from being locked down and only available to the upper echelons of Uber’s management. TechCrunch has heard from sources that it is well known inside the company that executives enjoy unfettered access to the platform. Furthermore, the situation has been deemed acceptable until this point.

While there is an argument that leaving data open for all employees is a legacy that harkens back to Uber’s early days — and perhaps it has yet to limit access, what with all the causes it is busy chasing right now — there is plenty of evidence that God View is viewed trivially by many inside the company.

. [Update: Uber has since taken the page offline, for external visitors, at least.] Though you need the right credentials to gain access to the data within it, anyone can check out the code and see the brotastic Easter Eggs that Uber’s developers dropped in there.

As well as a Dr. Evil GIF — someone, somewhere has some basic understanding that snooping on customers isn’t ok, it seems — there’s ‘cash_register.mp3’, and ‘straight_cash_homey.mp3’ that ring up when a ride is paid for and Uber makes money.

All of this gives the impression that it is a bit of fun, rather than a vast, rich database of information that should be managed securely and responsibly.

God View is hardly a secret either. Uber has used its real-time visuals as public party tricks.

Back in September, investor Peter Sims described an incident that happened while he rode in an Uber a couple of years ago. Essentially his details were beamed on to a large screen at an event in Chicago to promote usage of the service without his permission.

A TechCrunch writer was also at that very event, and recalls watching a big screen that showed guests in transit as they rolled into the event (in Uber rides, of course) in real-time. All in the name of fun for Uber maybe, our writer was a little surprised by the stunt.

God View has been used in a similar fashion at other launch events, and the callous disregard for the use of customer data is more than a little troubling when you consider that Uber knows a lot about its customers, their whereabouts, regular patterns, and other ‘meta data’ from their lives.

A Treasure Trove Of Data

Uber previously showed it can correlate crime and prostitution data, not to mention that it can predict when its customers ‘scored’ with the opposite sex after a night out. Rides Of Glory is the celebratory and pretty unsavory term that Uber uses for the latter. It also has such traction among U.S. politicians that could be used for all kinds of nefarious initiatives if placed in the wrong hands, as the Digiphile blog astutely noted.

Uber’s moral compass needs recalibration. The company cannot simply fall back to “Ok, we messed up” and then, once more like many times before, “Uber On.” 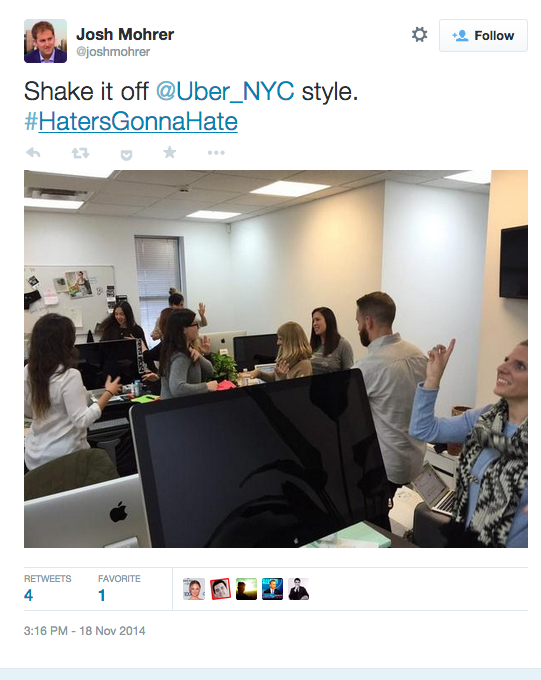 (Mohrer later deleted the tweet, but not before BuzzFeed immortalized it with a screenshot. Thanks, BuzzFeed.)

It is crazy that Uber staff can respond in this way to those who were rightly upset by the notion that it would play dirty with media critics, and that’s really the underlying message that I for one have taken from these past couple of days. Uber seems to exist in its own bubble, a place where it believes that it doesn’t answer to anyone, such is the apparent righteousness of its mission to fix global public transportation. (Having more than a billion in investor money to date, and constant accolades, likely feeds into this megalomania.)

That’s a real shame because the work that it does is largely solid — it has really found a need for what it offers, particularly in parts of the U.S.. While I’m personally yet to meet an Uber staffer who hasn’t been helpful and (seemingly) honest with me, the recent revelations, and Uber’s reactions to them, suggest that certain parts of its core may be rotten, or at least, many executives believe that — like God — they answer to no-one.

The company could fire its offending executives, it could remove the God View tool or at least restrict access — it could even change its CEO, though that is unlikely. But Uber’s mortality is becoming increasingly apparent to many of its customers. The question is whether it will (or indeed can) make changes to give us back some trust and faith in its humanity.