Update: Well that was very fast indeed. Jolla’s Indiegogo campaign to build an open source iPad alternative — taking its Sailfish OS onto the tablet form factor — has passed its initial funding target of $380,000 with around 2,450 backers putting in cash. And it did so in double-quick time, taking just over two hours from the campaign’s launch. There’s still another 21 days left on the campaign so expect Jolla to flesh out some stretch goals. Original post follows below…

Yesterday former mobile heavyweight Nokia announced it was getting back into the consumer electronics space with a $249 Android-based tablet — called the N1 — running its Z Launcher.

Today fellow Finnish company, and mobile startup Jolla, has revealed the next step in its hardware journey: Jolla is also making a tablet, albeit The Jolla Tablet will be crowdfunded. So this is mostly a pitch for pre-orders right now, with the price-tag starting at $189 for the first 2,000 pledgers, and stepping up thereafter to $199 for another thousand backers.

Jolla said its initial aim with the crowdfunding campaign is to get 2,000 people putting money down for the slate — so the funding target is $380,000, which is not an insignificant amount of cash required to make this dream to fly. But it’s a heck of a lot more modest than last year’s failed Ubuntu Edge $32M crowdfunder pipedream. If Jolla’s crowdfunding campaign succeeds it’s aiming to start shipping the tablet next June.

Jolla released its first device, a smartphone, a year ago in Finland and has gone on to expand the number of markets the phone is available in in Europe and Asia — most recently adding India and Russia. The handset runs the Sailfish OS — an extension of the open source MeeGo operating system which Jolla’s founding team of ex-Nokia employees had been working on before they left the mothership to carry on what Nokia was abandoning.

The plan now is to expand that Sailfish OS from smartphones onto the larger form factor of the tablet. Jolla co-founder Marc Dillon took to the stage at the Slush conference in Helsinki today to announce the tablet and push the button on Jolla’s Indiegogo funding campaign.

“We’re going to continue the Sailfish story forward by taking our great multitasking experience and our emphasis on privacy and usability and gestures, and along with our community we’re going to build the tablet. There will be a continuation with the way we have worked with together.jolla.com so we’re going to extend this so that the people who are participating in the campaign will be able to help to decide what kinds of features and things will end up on this tablet,” said Dillon, adding: “It’s going to be a very high end specification… It’s basically as good as a display as you can get in the market today.”

On the hardware front, the Jolla Tablet is aiming to square up to the iPad Mini 2, with a 7.9-inch screen, sporting a resolution of 2048 x 1563. Inside, it’s powered by a 1.8GHz quad-core processor, has 2GB of RAM and there’s a 5MP rear camera. 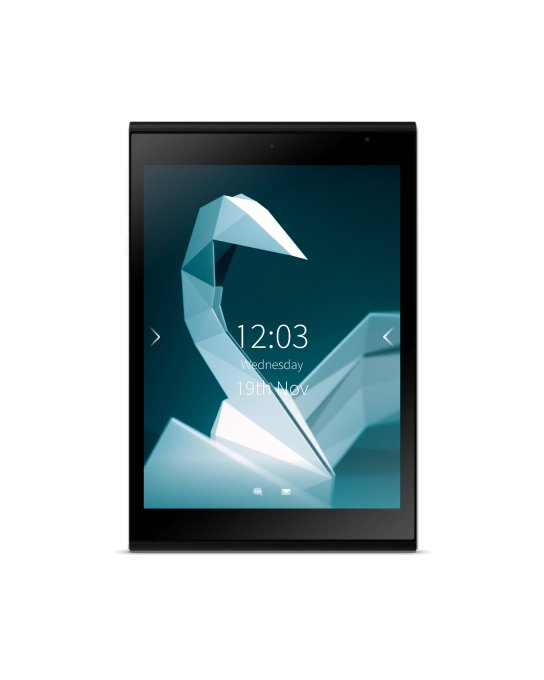 Interestingly Jolla is using Intel chips for the tablet, perhaps helped by subsidies from the chipmaker (which has been harried by Apple designing and using its own chips in the iPad). Albeit Intel is apparently planning to phase out subsidies over the course of next year. Which may explain why both Jolla and Nokia jumped on the tablet bandwagon now.

In an interview with TechCrunch, Dillon said the opportunity Jolla reckons it’s spotted is to create a high quality tablet that’s purpose built for multitasking — something he argues Sailfish was born to do.

“Taking our multitasking experience into a larger form factor is really exciting to me,” he said. “The kinds of things that people may ask for during the course of this campaign and the course of the development with our initial backers would be things like — what I would expect is — you can watch the game at the same time as you can follow and update your social media. Maybe have Twitter and Facebook open at the same time as you’re able to watch the game.

“Being able to take this multitasking to an experience that’s even better than what you have on a desktop computer.  The opportunity that we have here… if you think about having several of those applications open at the same time and maybe even being able to size them differently. I think this is the kind of opportunity that we have here and we want to take feedback from our initial backers in order to see what kind of things are really important.”

“The multitasking story — it’s not even good on the desktop today,” he added. “So I think we have a great opportunity there to make it easy for people to watch media or listen to music and engage with their social media and maybe even be browsing.

“It’s difficult at the moment to find a good tablet that is not the Apple experience. And even that is very single task oriented… Apple took the tablet and made it something that was useful to people but still it’s very limited. I think we can take it to the next level.”

Focusing on delivering premium hardware at a low price is another priority. So the Jolla Tablet’s initial price undercuts the iPad (and indeed Nokia’s N1) and also aims to be competitive enough to attract attention from Android buyers disillusioned by the current crop of budget ‘Droid slates.

“The main thing here was to be very, very competitive with specification and price,” Dillon added.

Jolla has not broken out sales figures for its smartphone. It’s also not specifying the exact number of Sailfish apps there are at this point, with Dillon only talking in terms of “thousands”. But as with the phone, Jolla’s tablet will be compatible with Android apps — so users aren’t limited to only native apps, a strategy that has allowed it to expand the reach of the Sailfish ecosystem.

That said, it’s fair to say Android remains lackluster when it comes to tablets and tablet apps. So Dillon said Jolla is planning to optimize some native Sailfish apps itself to make the most of its operating system on the larger form factor. It will also be releasing an SDK to get the Sailfish developer community building for the tablet.

“I would predict that most if not nearly all of our existing applications, plus applications that will be coming in the pipeline so we have a quite good timeline and a quite good SDK story in order to make sure that we have more applications available for the tablet than we have even for the phone today.

“We are of course going to be engaging with developers heavily in order to make sure that we have great applications at the launch time.”

Jolla’s Indiegogo campaign for the tablet is open to backers in the European Union, as well as Norway and Switzerland, plus the U.S., China, Hong Kong, India and Russia.

Why is Jolla taking the crowdfunding route to make a tablet? Mostly for community outreach, according to Dillon. “The priority here… is to engage with people, to get them involved and then to be able to create this together,” he said.

When it comes to competing head to head with his former employer, Dillon had this to say: “The fact that a large corporation like Nokia enters this space validates also our choice to launch a tablet, it clearly shows that there is demand for what we are creating.

“We know that while our specs are very similar to Nokia N1’s, we feel that our operating system Sailfish OS with its best-in-the-world multitasking makes our offering very different than another Android tablet, while still having Android application compatibility and the important feature of privacy. Also, there are hundreds of Android tablets on the market already, but ours is the world’s first Sailfish OS tablet.

“The Jolla Tablet also has fantastic technical specification and it is offered to first contributors on Indiegogo for only $189. So definitely our offering is more value for money.”

Asked specifically what the Jolla Tablet offers that Nokia’s N1 does not, he summed it up as: “The best multitasking in the world, strong privacy features, the opportunity to take part in development process (crowd sourcing), and more.”

On the privacy point Dillon clarified he’s referring to Jolla being an independent company with a business model that does not relying on collecting or brokering user data — “unlike the ~400 Android based tablets on the marketplace”.

He also pointed to Jolla’s pledge not to sell user data — which of course stands in contrast to Google’s priorities as an advertising giant that harvests and sells user data.