Editor’s note: Cory Doctorow is a science-fiction author, activist, journalist and blogger, as well as the co-editor of Boing Boing. The former European director of the Electronic Frontier Foundation and co-founder of the U.K. Open Rights Group lives in London. This is an excerpt from the chapter “Worse Than Nothing” from his latest book “Information Doesn’t Want to Be Free” published this month by McSweeney’s.

The technical implausibility and unintended consequences of digital locks are big problems for digital-lock makers. But we’re more interested in what digital locks do to creators and their investors, and there’s one important harm we need to discuss before we move on. Digital locks turn paying customers into pirates.

One thing we know about audiences is that they aren’t very interested in hearing excuses about why they can’t buy the media they want, when they want it, in the format they want to buy it in. Study after study shows that overseas downloading of U.S. TV shows drops off sharply when those shows are put on the air internationally. That is, people just want to watch the TV their pals are talking about on the Internet—they’ll pay for it if it’s for sale, but if it’s not, they’ll just get it for free. Locking users out doesn’t reduce downloads, it reduces sales.

The first person to publish a program to break the digital locks on old-style DVDs, in 1999, was Jon Lech Johansen, a fifteenyear- old Norwegian teenager. “DVD Jon” took up the project because his computer ran the GNU/Linux operating system, for which the movie studios wouldn’t license a DVD player. In order to watch the DVDs he bought, he had to break their locks. Seven years later, Muslix64 broke HD-DVD’s DRM for similar reasons—he wanted to watch a legitimate out-of- region DVD that he’d purchased. Both of these seminal figures in the history of digital locks were inspired not by “piracy” but by frustration with the limitations put on the legitimate media they’d paid good money for.

In 2007, NBC and Apple had a contractual dispute over the terms of sale for Apple’s iTunes Store. NBC’s material was withdrawn from iTunes for about nine months. In 2008, researchers from Carnegie Mellon University released a paper investigating the file-sharing impact of this blackout (“Converting Pirates Without Cannibalizing Purchasers: The Impact of Digital Distribution on Physical Sales and Internet Piracy”). What they found was that the contract dispute resulted in a spike of downloads on “pirate” sites, and not just of NBC material—it seemed that once people who had been in the habit of buying their shows on iTunes found their way onto the free-for-all file-sharing sites, they clicked on everything that looked interesting. Downloads of NBC shows went up a lot, and downloads of everything else went up a little.

More interesting is what happened after the NBC-Apple dispute ended, and the shows returned to iTunes. As the CMU paper showed, download rates for those shows stayed higher than they had been before the blackout. That is:

Digital-lock vendors will tell you that their wares aren’t perfect, but they’re “better than nothing.” But the evidence is that digital locks are much worse than nothing. Industries that make widespread use of digital locks see market power shifting from creators and investors to intermediaries. They don’t reduce piracy. And customers who run into frustrations with digital locks are given an incentive to learn how to rip off the whole supply chain. 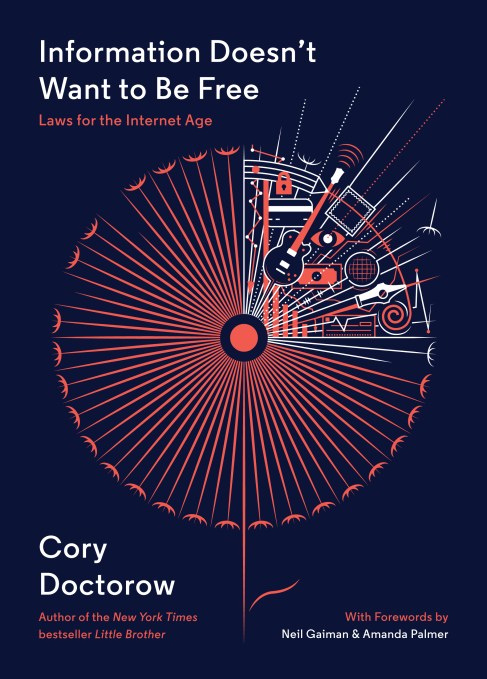 If you’re a publisher, label, or studio, the answer is simple: don’t let companies sell your goods with digital locks on them. And if a company refuses to sell your goods unless they can put their locks on your products? Well, you can be pretty sure that those locks aren’t there for your benefit.

It’s harder if you’re a creator, because many of the biggest investors have bought into the idea of selling with DRM or not at all. When it comes down to negotiating DRM, you just have to make a decision about whether you’re willing to let your creative work be put in some tech company’s jail in order to make your investors happy, or whether you’ll keep shopping for a saner, better investor.

A few years back, I sold a children’s picture book to the largest publisher in the world (which will remain nameless here), which then spent a couple of years developing it with me, commissioning rough illustrations and going through several rounds of rewrites until it was something we were all excited about.

One of my editors at Nameless Giant Publishing was also the head of its UK digital strategy, and he and I were very sympatico, as you might expect. After several months had gone by without a contract showing up at my agent’s office, he called me up and explained what had happened.

He’d gone to the contracts people and requested a no-DRM guarantee for the digital editions of my books. None of us thought it would be a problem, since Nameless Giant is my publisher in several other 34 formats, languages, and territories, and in every case, it sells my work without DRM.

But Nameless Giant had a new directive, from the very top of the business. From now on, all books had to be acquired with e-book rights, and all e-books would have DRM on them. My editor tried to negotiate (“Can we not acquire the e-book rights? No? Okay, how about we acquire them, but promise not to use them?”), but it was in vain.

The contracts person told my editor that the DRM was non-negotiable, and that if it was going to be a problem, he should cancel my contract.

So my editor quit.

The story has a happy ending. Nameless Giant sank thousands into developing a book that I can now easily sell to one of its less doctrineblind competitors, and I don’t have to let DRM companies lock up my copyrights. Also, my editor got a much better job.