A new application launching today called Odysee offers a different way for consumers to back up photos and videos from their smartphones. Instead of backing up to the cloud, which can be both pricey and sometimes even insecure, with Odysee, content is backed up to your home computer. For free! Well, it’s free until next year when the $5/year pricing plan kicks in.

It’s like iCloud without the monthly fees, in a way.

(iCloud, of course, handles more than photos and videos – but it’s this content that tends to eat up a lot of your iCloud storage space, as you probably know.)

The startup was founded by Raghavan Menon and Shiva Javalagi, both of whom have a background in networking, algorithms, caching and embedded software. Menon previously co-founded Ingot Systems, which was acquired by Virage Logic (later acquired bySynopsys). While Odysee is a bit different from that business which was focused on implementing software algorithms in silicon IP to improve performance, the idea for the app came from his own personal experience. He had kids.

“After they were born a few years ago, I found that walking around with a smartphone meant 100x more videos and photos captured,” he says. “People used to just capture the big moments; with an HD camera with us all the time, we capture everything, all the time.”

Menon says he understands there are plenty of good solutions for handling photo libraries out there already. iOS’s Photostream has made it easier for he and his wife to see each others’ photos, while Flickr is a great place to store them online. Videos, however, were the game-changer, he said.

“I rarely saw the videos that my wife took unless she grabbed me and showed them to me on her phone. That’s how we started: solve the video archiving, access and distribution problem for me — and photos would be handled as a subset,” he explains.

With Odysee, full-resolution photos and videos alike are synced from your device and on your home computer. That means that a family of five could each store their phone or tablet’s photo library on the family computer for safe keeping. However, Odysee isn’t only a backup solution, Menon explains. It also offers users a personal social network where they can both manually and automatically share photos with others, including those who use the app and those who don’t.

The automatic sharing, which happens on a timed delay and only with those specified, allows you to share every photo or video you take with another user. For example, a husband and wife who each take numerous photos of their kids would be able to immediately see each other’s photos in the photo stream in the app, while the originals are archived to the family PC.

“19 out of 20 people archive their videos on drives or computers at home,” says Menon. But they can’t automatically share videos across all their devices and between family members, and they don’t have access to their full photo and video archive at all times, he says. 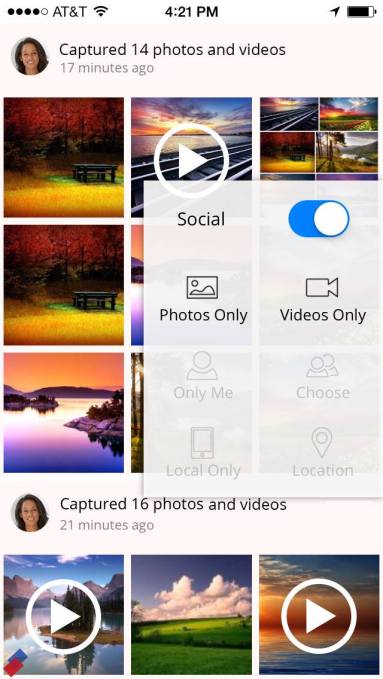 The app is immediately available for iOS and works in conjunction with a desktop app for either Mac (soon – before year-end) or Windows. An Android client is being tested now (in alpha on Google Play) and other platforms will follow.

For the first year, the service is free. It will then be $5 per year afterwards. The company says it needs about 3 million users for it to be self-sustainable at this price point. (Remember they don’t have to store your photos and videos, just sync them).

Longer-term, the team plans to offer an API for first-person cameras and support for any storage destination you choose, including Amazon Glacier, home storage that is often offline or other third-party cloud storage sites.

“Our vision is to be a thin layer in the cloud that ties together all of your storage devices, capture devices and viewer devices. We are storage agnostic,” the co-founder says.

San Jose-based Odysee is a small team of four with $750,000 in angel funding. The company is in discussions with potential partners on the storage and capture side now.