“The average American goes to one concert per year. If you double that, it has a profound impact on the lives of artists,” Songkick founder Ian Hogarth tells me. The problem is “It’s easier to buy a taxi to the concert than a ticket.” That’s why seven years and 10 million active users later, concert discovery app Songkick has begun to sell concert tickets directly. It’s a huge move that will let Songkick earn 20X as much as referring users to other ticket sellers, because Songkick gets a 10 percent to 15 percent fee for hosting the transaction.

There’s just once catch: it can’t do this in the U.S. yet. Exclusivity deals between venues and sellers like Ticketmaster keep tickets out of Songkick’s hands. But after just a few months, Songkick is now selling tickets for 25 percent of the shows in London and is pushing hard to secure inventory in other markets. It took Spotify years to build up the leverage abroad necessary to barge into the American market with on-demand streaming. Now Songkick wants to do the same for ticket sales.

Kicking Off The Song 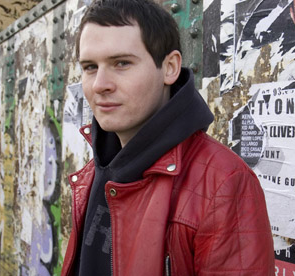 It’s the culmination of a long journey for the London-based startup. Songkick was founded in 2007 as a concert database with the premise that “If you make it much easier to know what bands you like are coming, people go to more shows.” Songkick struck deals to show its concert listings on YouTube, Spotify, SoundCloud and elsewhere. That was phase one.

Phase two was personalizing that data so rather than sifting through all the shows in your area, you could see a list of just the artists you like and get alerts about the ones you love. You can pick your favorite musicians or Songkick can tap into your iTunes, Spotify and Facebook accounts to pull them automatically. There are few things that make a music fan’s heart sink like hearing their favorite band was in their city last night, but they just never heard about the show. Songkick was solving a real problem for people.

Still, Hogarth didn’t plan on Songkick becoming a ticketing company. He was inspired by plane-ticket search engine Kayak, which helps you discover the best flights but passes you off to the airlines to actually buy the tickets. Similarly, Songkick would simply link out to wherever you could buy a concert tickets and then score a referral fee.

“But the bigger we got, the more we got people asking if they could sell tickets with us, and we started to think we should reconsider,” Hogarth tells me. At the same time, the CEO saw what he calls “the Uber-fication of mobile services.” People began to expect to discover and buy within the same app. Songkick’s iOS and Android apps needed a tune-up.

Forcing people to click or tap away to another service to buy tickets was not only annoying, but it likely hurt conversion rates on ticket sales for artists, and left Songkick with just a small cut of the revenue. Instead, if it let users add their payment info, they could checkout without having to sign up and deal with a slew of ticketing companies. Hence, phase three: Songkick ticketing. 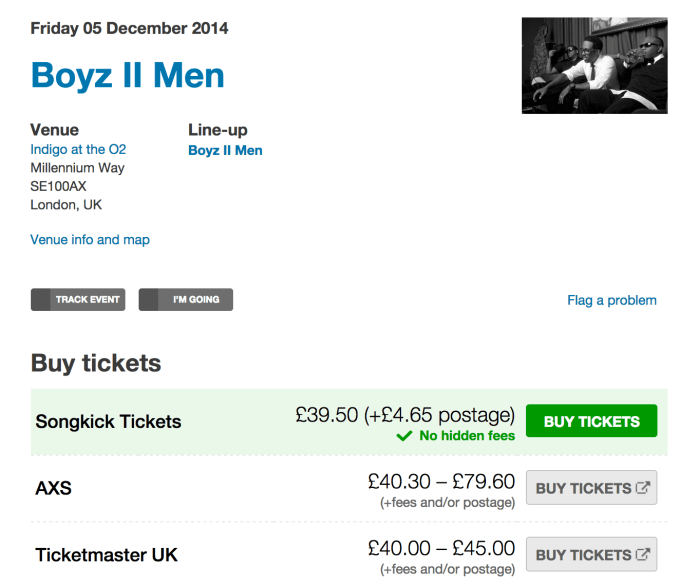 It started in London, not just for home field advantage, but because London has perhaps the most vibrant concert culture in the world. But venues aren’t locked into exclusivity deals with ticketers. Each concert hall can allocate blocks of tickets to whatever vendors they want, so plenty of businesses are incentivized to help them sell out a show. Thanks to its built-up discovery traffic, Songkick convinced venues to give it inventory, and the tickets sold like hot-cakes … or … mincemeat pies. This is England after all.

Now 25 percent of London shows have tickets sold through Songkick. “Promoters are telling us we’re the second-largest ticket seller they work with,” Hogarth says. Indie band Caribou sold 40 percent of tickets to its 5,000-capacity show at Brixton Academy through Songkick. Hogarth beams: “We’ve really been able to move the needle.” Songkick still lists links to other ticket sellers so fans can purchase wherever they like, but its slick, native-app buying experience is more convenient than the often messy mobile websites of other vendors.

By building a huge discovery user base first and then launching ticketing abroad, Songkick has avoided a problem that’s plagued U.S. ticketing startups like WillCall and Applauze: getting face value tickets for the hottest shows. In the U.S., most of the best shows are exclusively ticketed by TicketMaster or Ticketfly. TicketMaster earns a ton of money from convenience charges and the ads it shows on its site, so it’s highly incentivized to keep exclusivity deals in place with venues and event producers like Live Nation (which TicketMaster conveniently merged with in 2010).

Without a ton of traffic to dangle in front of venues, it’s hard for startups to convince venues they’re worth working with. WillCall ended up selling itself to Ticketfly to solve the inventory problem. Applauze has become more of a portal to buy marked-up tickets from scalpers on sites like StubHub, and it deals with a lack of diverse inventory by only showing a “curated” list of nearby events.

Now Songkick’s goal is to build up the clout abroad to break into ticketing in the U.S., where 60 percent of its users are. “If you look at what it took to bring Spotify to the U.S., it took traction elsewhere, and it took a partnership with Facebook. Now look. The labels are wholly behind it.”

The huge up-front payment Spotify paid the labels surely didn’t hurt their willingness to allow on-demand streaming. Songkick might end up having to do a similar paid advance to wrestle tickets away from TicketMaster and Ticketfly. Until then it will be competing with everyone from startups like Dice and Eventful, to ticket holders like TicketMaster, to secondary marketplaces like StubHub.

“I’m going to scale it out wherever I can find partners, and eventually bring it to the U.S. when the time is right,” Hogarth says. He thinks it’s only a matter of time until music boils down to three apps. “A radio app like Pandora, an on-demand app like Spotify, and a concert app like us.” In fact, they all work together quite nicely.

Big musicians like Coldplay or Taylor Swift occasionally make a stink in the press about low streaming royalties and pull their music from services like Spotify. They hope to earn more money from album and MP3 sales on iTunes, which they think get cannibalized by streaming. But whether or not royalty rates are high enough, that’s myopic thinking.

First, album and MP3 sales are in free-fall so that won’t be a viable strategy in a few years. Second, the money in music is increasingly coming from concert tickets and merchandise that hardcore fans buy.

“Most artists make 70 percent to 80 percent of their revenue from touring, and that’s just going to keep going,” Hogarth says. The way artists get discovered, turn radio hit listeners into fans, and turn fans into fanatics is through extended listening on streaming services. It’s a tough pill to swallow, but technology has changed the industry from a record business to a music business. There’s no going back. The best bet is to embrace streaming and other tech, mint a ton of loyal supporters, and tour. 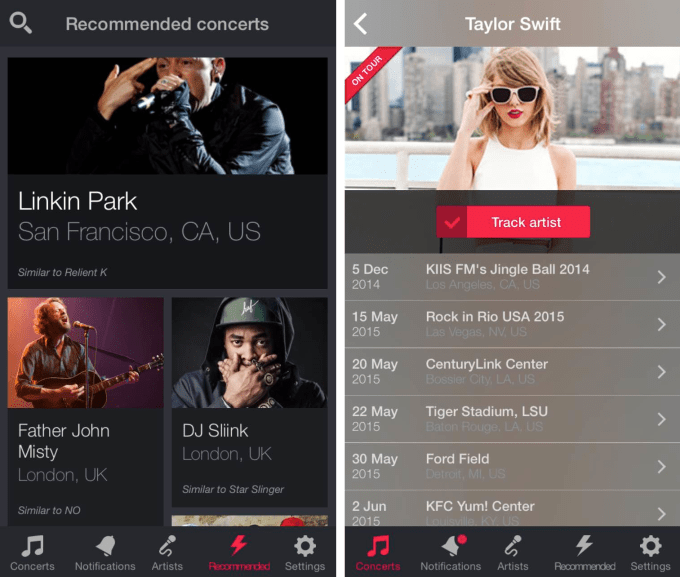 That’s why streaming apps and concert apps like Songkick have a huge opportunity to cooperate. Together they can change the average person’s habits from buying a couple of albums per year plus going to one concert to streaming dozens of albums, becoming a fan of more artists, and going to a bunch of concerts. Ticketing exclusivity deals and streaming stubbornness prevent that.